Hello all and welcome back to a short update on the game. We'll be discussing some new things that were implemented, changed, and updated. Without further ado, let's get started. 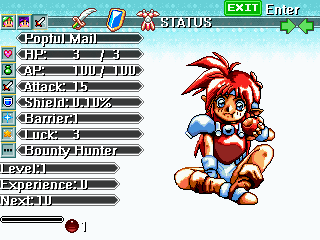 In the last update, a point was mentioned in which guest characters now have their own status screens. Above is an example featuring Popful Mail.


Guests in this game as explained prior to this are characters that usually come from different worlds. When you receive a guest and choose them, they will be marked below your character icon at the bottom of the screen. Since Shantae and Asha are the main characters, the guests act as a shield or third wheel for your leader. If you don't want the leader to be damaged, use a guest. If Shanate and Asha are KO'd, you will get a game over even if your guest is perfectly fine.


The next guest will be revealed at the end of the week. But I can provide you with a hint. The next character is a versatile acrobat.

In the last demo released in February, there were a set of options you could toggle before the game began and could also access in the pause menu. You can now toggle the following. Please note that new toggles are in red. 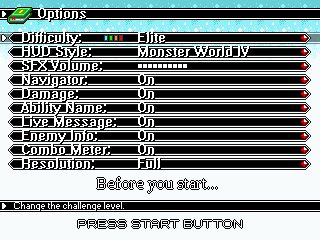 In easy mode, the game reverts to the design of Monster World IV in which you receive 1 damage per attack no matter how powerful it is.


You can also change the size of the game screen with the mouse if need be. 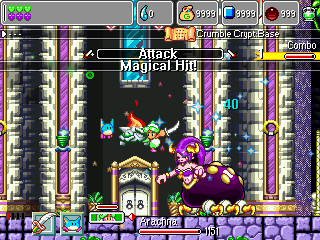 Similar to another project I'm working on, a combo system was implemented. This time however, it is a bit different. When you damage a foe, a combo meter will show up in the top-right hand area. After dealing a hit, you will have 3 seconds to hit any foe again to keep the link going.

If you are damaged, or leave the room in any way, the combo meter will reset and you will gain nothing. If your combo has reached a certain threshold and you let the bar go all the way down, the combo will end and you’ll gain experience points. This means you can be greedy and gamble for more combos to get more experience, or you could avoid getting damaged or a condition in which the combo resets.

Keep in mind, you must have 10 or more combos before you start earning experience points. Below are the experience conditions

The main city in the game; Rapadagna has been expanded quite a bit. It is double the size on the outside. The castle itself has nearly quadruple the rooms it did in the original game. An example of Market District is below. 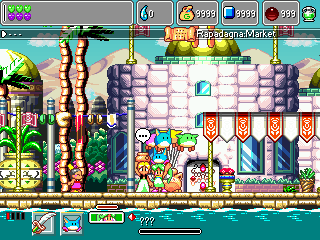 That is all I have for now. A reveal is planned for the end of the week for a new guest character as well as a few other things. I hope you are looking forward to it. Until next time!