Hello everyone, back with a quick update on some things and a new guest reveal. Today, we'll be discussing the bonding system which was mentioned a short while back and the chat system. Without further ado, lets get started!

The bond system is a new function in the game in which you can equip abilities from other people you meet in the game; including the character you are playing as. When you equip an ability, you'll earn a special bonus or attack of some sort that will aid you in various ways. Each character has a "Bond Level". The higher a bond level rises, the greater the effect of the ability you have equipped. However, keep in mind not all abilities will rise in level, but a majority of them will.


A bond level is increased in numerous ways depending on the character's relationship to you. Sometimes you'll gain an instant full bond level by completing a side quest or some bonds are increased over time. You can only equip one bond ability at a time, but they are switchable on the fly, so you can equip them as needed. Also note that you can still increase bond levels of other characters regardless of what bond you have equipped.

For example, if you sell 4 gold bars to the rich woman in Rapadagna City, you will increase her bond level by one with each one sold to her. Her ability "Money Maker" is a useful one in which you will earn interest in the bank when a certain amount is in it. Not only that but when the money maker ability is equipped, the amount of gold you receive when selling her a gold bar is increased by 200 per level. An example is below. 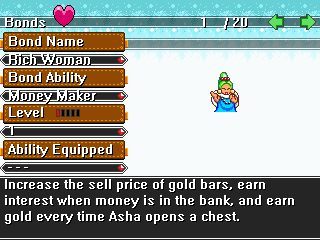 Special Bonds
Some bonds in the game won't give you a special effect, but an entirely new attack known as "Bond Special". With the bond specials, you hold the attack button and press the special button to call your bond to do a special in place of your leader. These specials often give a special effect bonus to you when they are activated. An example of a bond in the game is below. She is a completely new NPC in Monster World. 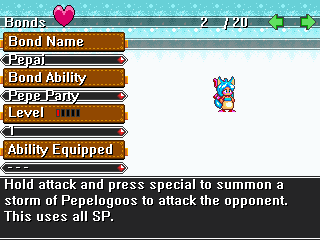 The chat system is one in which you can learn more about the game's world and characters. These chats are mostly used for developing characters and lore in ways that wouldn't be necessary for the main game and can be viewed optionally. Often times in these chats, you'll learn a lot of new things and even earn items within them. Some of these chats even increase bond levels as well. 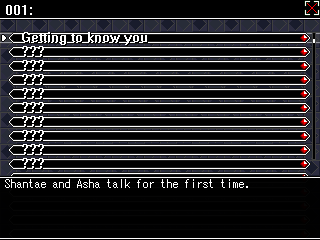 Last time, Popful Mail from the Sega CD classic was revealed to be an optional playable character. This time we have another. This one in particular is a special one because like Monster World 4 (which was not released until 2012), this game was also a Japan-only exclusive. This is one of the best action platformers out there on the system due to its fluidity, simple combat, and movement versatility. Not only that, but I felt this character was extremely deserving of an encore in some way, shape, or form.


The code name for this character in the last blog was Versatile Acrobat, so this character has a very high mobility set. Today we have no other than... 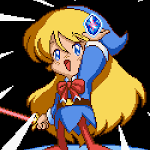 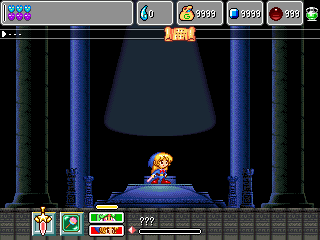 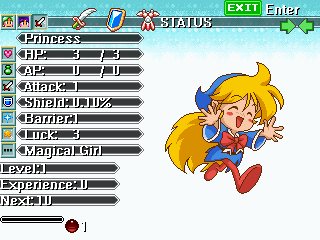 That is all I have to discuss at this very moment. More will be revealed very soon. A new guest character is also planned on being revealed next month. The code name for this one is Emerald of the East. Until next time!