Hi all! I am back with new info regarding playable characters and some other updates. There are some things I'll still be keeping under wraps until later, but today's update should give you an idea of where I am with the game's overall progress. With that said, let's get started!

Before I get to the new playable characters, I'd like to go ahead and discuss some of the other updates that have taken place since the last one. These include...

One thing that I believe has been missing from certain characters in the game is some sort of dodge technique. Cart wheels, back flips, sliding, back dashing, sidestepping, teleporting, dashing, reversals, dodge rolls, you name it. While every character is not planned to have one, many of them do have a technique that allows them to dodge quickly and many of them work differently depending on who you are. 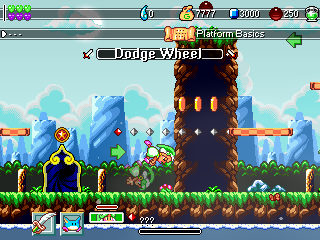 Not quite a dodge roll, or a cart wheel, but a dodge wheel!

Platform bypass has been changed

Due to certain character's moves conflicting with the bypass code of platforms, it has been changed from holding down and pressing jump to tapping down twice.

New bond abilities have been implemented 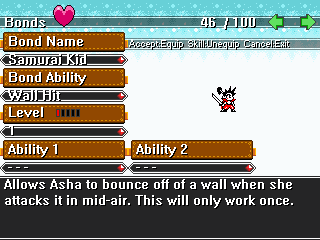 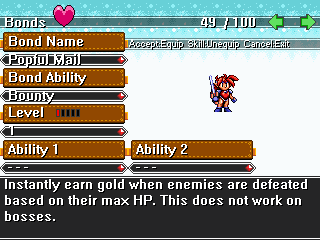 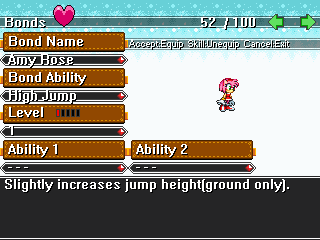 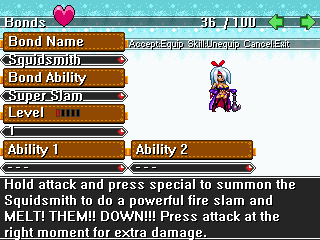 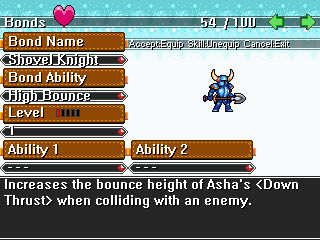 Certain areas are getting expansions, changes, and slight remakes

Since there are over 90 side stages in the game as well as over 10 main ones, I've begun to realize that some of the side stage maps can be used to expand the main ones and vice versa. The two stage types kind of give and take from one another, so some stages are now bigger and/or better designed than they initially were. This has also led to some original expansions in stages that can only be found on the main world map.

One of the main reasons why there are so many stages in the game was give me a reason to make a lot of different mission types, stage designs, and things to do in the game's world. Not only has this forced me to make lots of maps, but it has helped me understand level design philosophy a bit better.

Story is being heavily simplified

Due to the fact that there are so many characters and game play should always go first, I have decided to extremely simplify the game's plot so that even a child could follow it if they were to pick it up. If a location, character, or dialogue is not needed, I will not put it in the main plot. Storytelling and lore can be told through multiple ways; many of which is optional. But there will be a base plot that has cut scenes you can skip by holding the "start" key for exactly one second.

Alright, now those updates are out of the way, it is now time to reveal the next 5 playable guests! Lately I have been playing some games that have been on my "to finish" list for quite some time, but never got around to it, but boy am I glad I did!

Most of the titles were requirements because in order to get a feel for these characters, I actually had to play them thoroughly. Each character was decided based on what they could do differently from the others. Even the smallest ability difference makes them viable as a playable character. With that said, here are the next 5 fully playable guests.

Tatt is a magician in Popful Mail that is the apprentice of the renowned magician; Mutton Head. Tatt is able to switch between 5 magical canes by pressing the skill button. Each cane has a different magical attribute or ability and can be aimed by holding up or down while it is on screen. He is also able to block projectiles and attacks with his magical cloak.

Gaw is a flying bat-like creature that lives in the cavern region of Popful Mail. While he does have wings, they are only used to make him jump high. Gaw has the highest jump out of all the guests, but he is only able to jump once. He is also able to block attacks by hiding in a curling stance. In terms of attacks, Gaw is capable of using his claw attack, tail attack, and breathing fire continuously until his attack meter is depleted.

Ebisumaru is Goemon's friend and is the only character that can throw projectiles in all four cardinal directions. You can also attack continuously by holding the attack button. This will rapidly twirl his ribbon. While it is weak, it is capable of doing a lot of combos.

No, it's not the Sasuke you're all thinking about XD. This is a small, quick robot ninja in the Goemon series. Sasuke has terribly short attack range, but can throw kunai and bombs from a distance. Due to his shortcomings, he is able to reflect projectiles with his second sword swipe, jump three times, dodge roll, quick drop, and has incredibly high combo potential. He also is the fastest character in the game when running.

Ellie is from the 2011 Nintendo DS gem; Monster Tale. I have been keeping tabs on this game for a very long time and recently had the pleasure of finishing it. Due to the fact that Ellie has so many similarities with Asha, goes to place called "Monster World", and the graphic style was exactly what I was looking for, adding Ellie in was a perfect choice. Ellie's move set is extremely versatile and highly reminiscent of Mega Man X, but with some changes such as not being able to shoot while sliding down a wall.

She is able to wall jump, roll, shoot, and attack in a wide variety of ways that make her one of the craziest characters in the entire game if used correctly. She also has a pet along with her named Chomp that attacks the nearest foe when you press the attack button at close range. With this, it is possible to send him off to fight another enemy while you either fight another one, run, or do something else.


There are very little guests left, but there are a total of 18 playable characters now(3 of those being Shantae forms)! It has been really fun learning how to program them and make them work in the game while also giving them some new touches here and there to avoid being exact clones of one another.

I think it is about time I revealed something. This game has more ties to Monster World Legends than you may think. Since the beginning of this project's development, while tinkering with both games' design documents, a conclusion was made to actually connect the two games together in terms of plot and some mechanics. Technically speaking, you have been playing not only a Monster World 4 sequel and a crossover game, but Monster World Legends' prequel and spiritual successor at the same time. Though the original game is not done yet, they are being designed side by side under wraps in some fashion.

Each playable character so far in Shantae and Asha was chosen for more reasons than just paying tribute to a game or franchise, it was so that I would be forced to learn how to not only make better physics and for characters to be more satisfying to play as, but to make the entirety of Monster World Legends play better too as a result.

I am not sure another blog will be posted this year, so I believe this is the last one for 2018. It has been an absolute blast and an invaluable learning experience making this and I hope you are all enjoying the project so far. That is all I have for you today. Until next time! Happy holidays!

Special thanks to The-Pyromaniac for allowing me to use the Shovel Knight sprite!

Oh I never actually brought this up but the level screen always bugged me, because the only levels available were at the end of the level select screen. And I thought I was doing something wrong or out of order.

Oh oh! And will Ellie be able to level up her pet? (Just kidding, that'd be nuts!)
XBuster

Close
12/16/2018 07:55 PM
Thank you! :) I am sorry about the level screen problem. I see now that was a bad design choice XD. Thank you for mentioning it! I'll be sure to make it more clear next time. There will most likely be at least one more playable build until the final game is released.

As for Ellie's pet evolving, it was in consideration when developing her. In the final/polish states of the game, that might just happen...
Pages: 1