What's going on?
This is the second time in a week that I play a game related with trains... yes, this game is entirely set on a train, but let's start this review from the beginning. YOMOTSU was one of the entries for the IGMC (Indie Game Making Contest) made in 2017.

YOMOTSU is also a train, and as you can probably expect, not a normal one. Nope, this is a train that leads souls to the underworld and guess what? Our alter ego (that we create in the beginning choosing gender and name) is a student that was peacefully sleeping on his way to home, and when he wakes up he realizes that he is on a train that is going straight to hell! Not Good, not good at all!

Here he meets some weird passengers, like a mute girl and an enchanted talking chest (a mimic?), that seems to know the place very well: the chest tells him that he can leave the place only if he speaks with the machinist, that is on the first carrige, of course! And... yes, he is on the last one so this means passing through all the carriages.
And since this is an infernal train expect to find necromancers, liches, succubi and other demons as passengers, considering that unlike them our alter ego a mortal living being... well they will be clearly hostile to him! 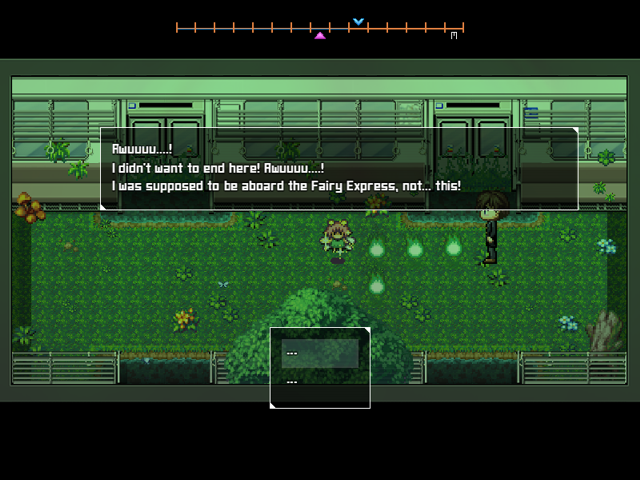 But do not worry! During the adventure some other weird creature will assist him (but only after he proved his strength by defeating them first!), starting with the zombie ticket inspector. The only problem is that only one of these helpers can join him at the time, but they can be switched during combat, because each one has its own specialties (for example the ghost is uncorporeal and has some nifty skills, the succubus chan charm opponents, and so on).
Also don't worry if they die, being them zombie, ghosts and demons (who else could you expect to find on that train?) are revived automatically after each combat encounter. Our protagonist is also healed, but watch out, because he is just a man or woman, so death for him/her means game over!

But this is where the mute girl and the talking chest comes into play: she can provide some spells, while the chest has equipment (weapons, armors and accessories) for the protagonist. Anyway they do not work for free, but you have to pay them using some soul crystals that are earned fighting monsters or found on shining spots, so watch out for them.
Our undeads associates instead will learn their abilities just levelling up, but the game requires some management since you have limited slots for active and passive skills.

While the first enemies won't required much strategy, later ones will need clever planning, like exploiting their elemental weaknesses, taking in account the difference between physical and magical attacks and so on. But do not worry if you did not spend wisely your crystals, because enemies DO respawn (it's a train to hell, after all!) and you can farm all the crystals you need!
Well and also earn some levels, of course, but mind that each character can rise up to the 5th level, and that's all, so you will probably hit max level after the first half of the game and of the train!

So how can you hope to defeat the deadly later enemies? Well with a good skill allocation, the right equipment e some luck of course! This game is all about customization! (a hint: I killed everyone until the Reaper without needing equipment at all, then Agony & Death and Mask of Madness helped a lot) Last three-four encounters were pretty difficult (stuck at 5th level our party members will never be really tough!), but I admit I was able to complete this game without much hassle (except for the final combat and maybe the one against the Sun & Moon) in one hour and thirty minutes.

Graphically the game is pleasant and looks good, from what I understand it uses a some Rtp and some custom assets, in any case I did not see much difference and I found the style coherent and pretty. I like how each carriage has a different theme. Ok we only see the interiors of the carriages, so there is not much variety, but it makes sense due to the story.
Ok, now the story... it is pretty good in my opinion, and even if ending is brief but fits well and characters are funny and interesting (the part with the fairy is especially amusing, play and see for yourself!), there are some surprises and plot twists, and I admit that this is better than I expectd in the beginning, considering this was a short game made for a contest.

Music is good, fits well the game even if there is not much of it but hey, that's ok and I liked it! Sounds are also fitting the game, prepare to hear often the typical train sounds like "choo-choo"... but hey, considering the theme I would surprised not to hear that sound, isn't it? 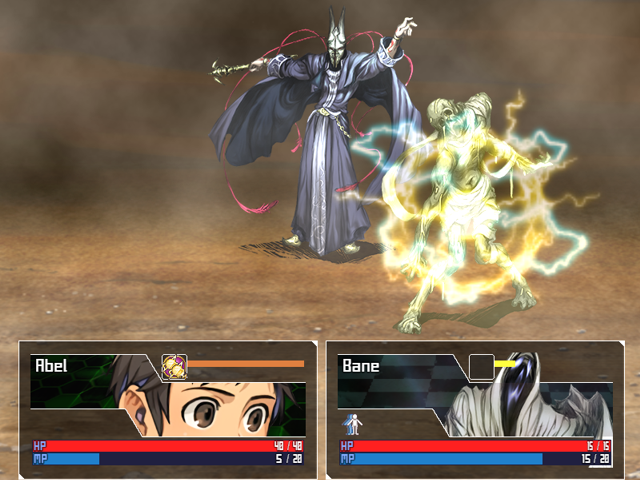 Last stop... the Verdict!
To sum up the game, let's make it clear that despite being this a simple and totally linear adventure based on combat encounters and how to win exploiting enemies' weaknesses, it has a pleasant frame, nice story, funny characters, entertaining dialogues and also achievements and some hidden secrets!

Well done! I found no typos or errors in this game even if there are some weird (and unfair) choices like some area attacks that will hit even those party members that are NOT partecipating in combat (so they can wound or even kill those allies that you are keeping as a reserve!).

This was created under a month for that contest, so I am rather impressed and I took in account this was made fo a contest. It's a nice game to spend a boring afternoon, well though and polished and also pretty challenging but not impossible to complete. Considering all this, it is a 4/5 from me!

author=TheRpgmakerAddict
This is the second time in a week that I play a game related with trains...

You know... it's funny because the prototype name for this project was "Midnight Train" or "Midnight Express" something like that xD I'm glad I changed it, it was just too plain :P

Thanks for the review! And I'm glad you had some fun :)
TheRpgmakerAddict

author=TheRpgmakerAddict
This is the second time in a week that I play a game related with trains...

You know... it's funny because the prototype name for this project was "Midnight Train" or "Midnight Express" something like that xD I'm glad I changed it, it was just too plain :P

Thanks for the review! And I'm glad you had some fun :)

The name is a good name, naah another Midnight Train and I would had no idea for the review title loool.

Oh yeah was good especially I liked some twist and surprises
Show
like the chest fight or the catch the fairy minigame, these were unexpected
Pages: 1