0 reviews
"Don't be stupid... You're being pathetic."
"Do you think I care that your father is dead? Actually, he deserved it."
"What is this? It seems we are inside a some kind of survival-horror game."

In the little and simple city of Marienville lives Alexa, a simple 17 years old girl, who despite the various hardships of life she had to overcome, she still continues to live happily and strong.

Sadly, the truth is that the worst is still coming, lurking in the darkness of the city.

The danger of the Virus X13, in fact, is still threatening the humanity, although it seems that a cure is being developed. Is it really so?

When the streets of Marienville will become like a hell in earth, and the most terrible secrets will be revealed, will Alexa be able to continue to be strong for her loved ones? 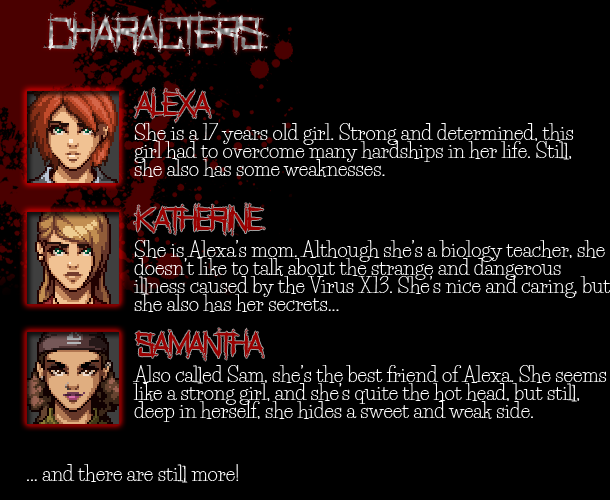 I started this game long, LOOOOOOOOOONG ago, but I never finished it. Thanks to the event Revive the dead 2: deader or alive I finally had the chance and motivation to polish it, and hopefully, to finish it.
I was inspired by games like Resident Evil 4 and The Last of Us, which they are, for me, some of the best games out there.

So here's my first blog of "no eXit", which is also the fifth progress update for the event Revive the Dead 2: Deader or Alive.
So, let's just Start and talk about it:

Encountered difficulties:
So, since this game is an action rpg, I decided to use whether the action battle script of Moghunter XAS or the one of Khas SAS, which I personally like more. The problem is that SAS has a pixel movement integrated, which I really dislike and in this last days even hate. Why is the Pixel movement a problem though, will the majority of you ask. Well, it may sound stupid and not that big of a challenge, but for me it's really annoying, because it seems that because of it the passability which I already set in the database doesn't work as expected. I mean, the movement of the player is really strange and in my opinion it makes the game look a bit strange, or rather stupid if I want to be honest. Therefore I'm trying to settle this thing in a way or another, and since I'm not a pro scripter (actually I'm not even a rookie T^T, scripting drives me CRAZY!) it's taking me a LOT of my free time, which is not much, believe me. Yeah, so... Now I'm thinking that maybe I HAVE to take the script of Moghunter, although I find it a bit more complicated than SAS, but... If I'm not able to desactivate the Pixel movement, then I don't have a choice.

New things added/old removed:
Like I already said, this game has an action battling script, which the original game didn't have. The original one was more story-based, but since ALL of my games are like that, I wanted to try to add some gameplay too. And since I don't really like the classical turn-battles I decided to include some action ones, which for me are better and more entertaining. Besides the art which I use in this one is "pixelated" or rather a bit "retro", i think? Although the original one had normal tilesets, like the one of celianna.
Lastly, but not least, the story is also a bit changed. The original one is soooo complicated, and I realised that I had to change it a bit in order to be able to finish in time. Still, the main aspects remained the same.

Where I am now with the game:
I don't want to say that I'm nearly finished, but I'm really glad that I'm at a good point. I have all the maps already done, and apart from the problem with the pixel movement I think the development is proceding pretty well. >u<

Whether I think I'll finish/have a demo ready by the end:
I hope I will be finished by then... I REALLY hope so. I mean, the development is going more or less like expected, so... Yeah, I have high hopes that I will be able to post a COMPLETE game... Just for a change XD

So guys, I hope that my blog wasn't boring and that you're excited as much as me to see the complete version of "no eXit".
Stay tuneeeed! And subscriiiiiibe!! >u<

Until next time,
MagiK :)