"Catfe" was a hastily thrown together entry in the 2017 Indie Game Maker Contest. A contest that gave birth to some solid if short projects like "Demon Phase" as well as gave birth to one of the worst magical girl games I've ever seen in the form "Lobthe Magical Girl". And while I'd argue that this game is a pretty weak entry. At least it has the excuse of being a rush job to get something submitted in time. And at least the team behind this project acknowledge that it sucks. 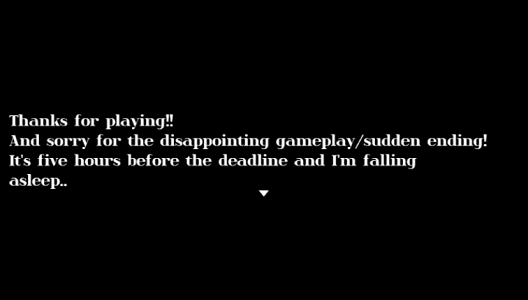 Which is more then I can say for a few other developers on this site. Especially a certain developer that loved to put out games with outcast in their title.

You play as Verde, a crazy cat lady that owns a café. And when she's not busy slinging around coffee and snacks she's out rescuing lost cats. After all, if we let animal control get to them first there's no telling what they might do with them.

On the gameplay side of things "Catfe" is comprised of one of the most boring tasks you can do in a game. In other words, you devote your entire time in this game to completing simple fetch quests. And while the game does try to raise the stakes a bit by having you lure the cats in with offers of toys and sardines. It doesn't make this game any less boring. After all, if I want to amuse an animal by throwing a toy around I could go play with Lacey, my brother's mutt, for a bit.

Though I do have to ask what the fuzzy toys in this game are made out of. After all, who in their right mind would drop 200 bones on a single, non-reusable cat toy.

On the graphical side of things the game is alright for the most part, but I do have a few gripes. For starters I wish the game was comprised of more then a single map. After all, it makes the town look rather small and begs the question why I need multiple days to find Sherbet, the target of the second fetch quests. After all, you can walk from one side of the map to the other in a couple of hours. So, it's not like it will take all that long to spot Sherbet on top of the general store that sells the fuzzy toys that he loves.

This is one of many games I've played of late where the team forgot to include background music on the title screen. I suppose I could attribute that to the rushed nature of this project, but I'd argue that something is better then nothing in this case. And while I personally would have suggested the team go with "Neko Hanten" from "Ranma 1/2". I could see the prudence in not doing so if you didn't want this game kicked out of the contest for using a song without permission.

"Catfe" is a clearly rushed game and suffers for it in ways both big and small. So much so that I really can't recommend this game to anyone. After all, fetch quests are boring as hell and that's all this game is. A boring series of fetch quests that ends with the player only being slightly better off than when they started.