2 reviews
Save to Dropbox
The emperor of the moon

The story takes place in Yeli, the small country where people live peacefully under the reigns of the empress Baitien. But one day, the empress, who is loved by her citizens, fell ill. Wenshan(MC) took a long journey to visit the empress and finally arrived at the palace. Unfortunately, somehow she got herself involved with something frightening in the dungeon.

Was it really an illness? Was it an evil plot by someone? While searching through the palace, she found a letter... "The empress assassination plan"

Not allowed (Let's Play is okay, even when monetizing. But only for English version.) 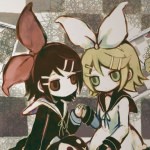