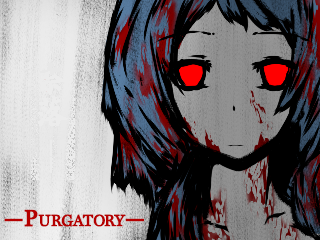 Not Heaven, not Hell, just Purgatory!

Purgatory is a short horror survival horror adventure made by Nama and translated by KumaRose. You probably are wondering why today I am reviewing this game, that was released in 2017. Ok, I admit this: I saw the recent release of Purgatory II and I wanted to play it but could I skip the first part? Nope! And you should do the same, of course.

The game starts "in media res" with our protagonist, a blue haired shy girl that never speaks (not that you meet many characters, but she never speaks even in the flashback cutscenes) Enri, that falls into an underground complex full of blood and dead bodies!
Obviously se has to escape from this nightmarish location, avoiding to become another nameless body in this underground slaughterhouse.

Aaaaand what is a slaughterhouse without its butcher? Yes, there's a sort of Leatherface (a giant masked brute that doesn't even need a chainsaw!) that owns the place is likes killing and butchering people. But wait, this is not the only danger here, there are also giant spiders, strange tentacles and giant worms that live in the darkness! Whoa... this place is hell... but no, it's just a purgatory!
The beginning of the story will be told through some cutscenes that will present Enri, the etremely shy protagonist and other schoolmates, like Emma and her friends, that had the brilliant idea to visit this abandoned location. 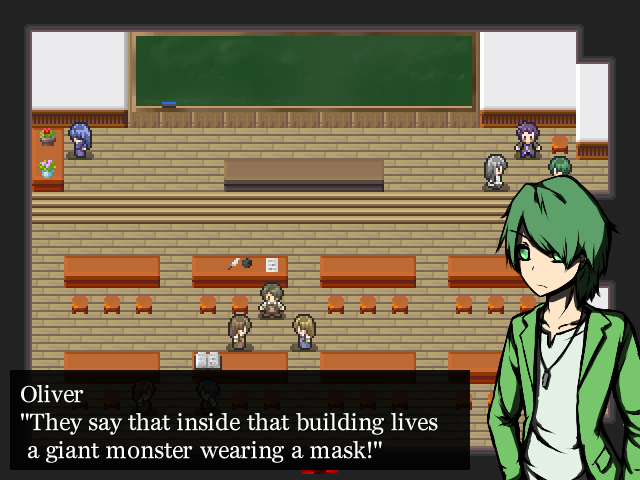 Oh well... this is a flashback that will provide a background for this horror tale

But the gameplay then? How is it?
Purgatory is a classical horror adventure with some enigmas and puzzles, and many chases scenes: find keys, collect useful items, and use them on the right spots to unlock next floor, but don't be caught by the butcher, or it's instant game over!
Speaking about the chase scene, there is one in particular where you can see a couple of keys that you will need later... well DO NOT waste time trying to collect them since the maniac is too fast, AND you can go back later. I did not know this and I wasted some time trying to collect the keyis and escape... nah it's impossible and also it's no use! A waste of time, indeed.

Speaking about time lenght consider that the game is about 45 minutes long (if you do everything!). There are two endings, one bad and one good (uhm sort of good, anyway better than the bad end!), and to earn the second you have to do some extra work and solve a couple of puzzle more. But it's worth of it, even if the final scene is quite short and won't explain much but hey... then you can play Purgatory II happily and see what happen next! 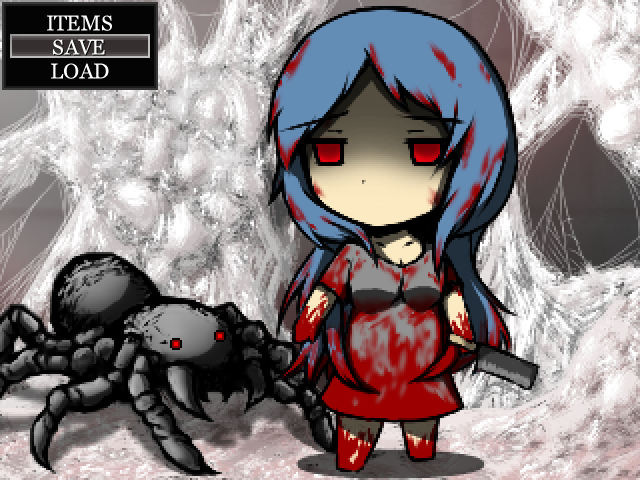 I like how the menu shows the items that Enri has with her. And in this case she has also a little friend! Well, maybe not SO little!

Graphically the game is ok: the scenario is dull and dark (except during the cutscenes of course), but it's a dungeon that included a slaughterhouse, so it's pretty much what you can expect. The visual are sometimes darkened by black shadows and this contribuites to make the player uncomfortable and making also some parts slightly more difficult, but not too much.
I liked the design of the different monsters except for the butcher, that is huge but it clearly shows that it's just an enlarged/resized charset. I mean, it's just made with bigger pixels and that shows (not good looking... and I do not mean that because it is a monster! He could have been more scary than a big head lug).
I liked a lot the menu that indicates visually the items that Enri has with her, it's a nice stylistic choice that is rarely used. Her pic is also really cute, except when she wields the demonic axe and loses the chibi features! Cool!
Anyway do not expect to consult often the inventory since keys are used automatically when you open the door, and window appears giving when there is the option to use an item when interacting with some points of interest.

I do not remember hearing music but there are many noises, mainly regarding chopping meat, breaking bones, the squish-squosh of walking on rooms full of blood (I like when the walking speed is reduced due to the "difficult terrain") and other... uhm... creepy sounds! 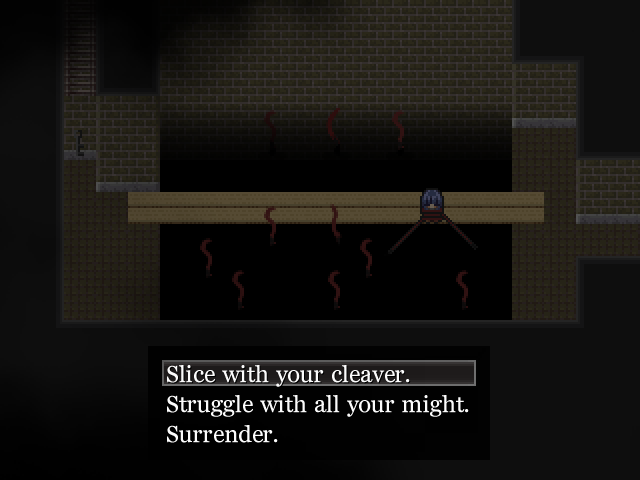 Guess what? One choice means life, the others death!

Final Verdict
Purgatory is a game that will surely leave you wanting for more. The ending is probably the weakest part of this game (it is abrupt and leaves a LOT unexplained), that is in my opinion an interesting short horror adventure. Puzzles are quite simple, I just had a hard time with the code number one, but I saw that I was not the only one. Please mind to save often (you can save anytime and anywhere) and pay attention that after a certain point there is no turning back, so you may lose the option to get the good ending.
An issue I had was the fast moving protagonist: Erin walks really quickly (except when she is stepping on cluttered terrain) and this made somewhat difficult to enter narrow passages on the first try.

Oh also be warned of the gory scenes that thankfully the dismemberments are only on the pixelated level, so do not worry, you won't see detailed gruesome scenes, still this is a horror game with dark and horrible situations.

Ok, this was Purgatory, probably a not so original, but still enjoyable horror adventure. The rating in our game ranking is 3.5/5. Now, will the sequel be better or worse than the first? Let's find out in one of the next reviews!