0 reviews
Part Visual Novel, part combat-centric RPG. Hero Panic will let you recruit heroes from all different backgrounds, and form the perfect party to take down any challenge. Can you survive the combat challenges and unlock the greatest rewards and treasures the game has to offer?

One month ago, the city of Everdawn woke up to half of its population missing. At the same time, people from other words were materializing in the city. Everdawn fell into chaos. Families were split, criminals unleashed, and there was a government-sized gap in Everdawn. Seizing the opportunity, one person rose to the top to lead the city in its time of need: Anathema. And she's not fond of the new people who have been appearing in the city. 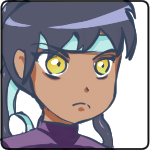 You are Rin, and Anathema has you in her sights. You're not sure why, but she's relentless. Driven into hiding, you have no choice but to recruit the outsiders to push back against Anathema's regime, while getting to the bottom of the missing citizens. Will Rin put a stop to Anathema's regime? Will she be able to find the citizens who disappeared? Or will Rin end up captured, or worse, by her hunters?

OH HO HO, HAS IT BEEN A WHILE OR WHAT?

How have you all been? Good? Great! If you wanna chat about anything I'm going to discuss, please leave a comment down below. 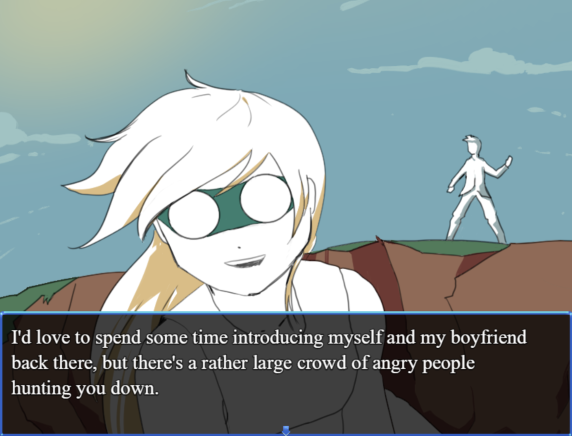 After a lengthy bit of time spent in Retail Management for over a year which sucked out all of my life and energy, I've now found myself in a much better job which allows me far more free time! So that being said, I am back.

And I'm working on Hero Panic!

This is the only game I plan to work on for the time being. The whole "start a new project and abandon it part-way through" was great and all -- and legit led to some finished games! -- but it stretched me too thin and didn't allow me to focus on one solid project. Which is why I'm only going to focus on Hero Panic, and I want to tell you what's going on with it!

I won't be as active on these forums as I used to be (maybe?), but I'll certainly be around for a while as I work on this project. Chat with me down below!

Hero Panic! Wait, did I drop an extra Hero from that title? I did. Why, you might ask? Because, well, it's headed in a different direction than before. How different? Allow me to explain.

The first iteration of Hero Hero Panic was a short game I was making which focused exclusively on battles. It was a cool concept, and I made some fun mechanics that I think you all would enjoy. The thing is, it was only focused on that, and the story was paper-thin. It was about fighting, getting characters, and doing more fighting. I had come up with plenty of content to keep you all fighting for days! Maybe.

In reality, I burned out early on by making art for everything. So then, I cranked it way down, made everything scarce as far as art went, and then I lost interest in the whole thing.

Funny how that works, eh?

But then I was inspired about another amazing RPG Maker game (and I will tell you all about it if you drop a mention in the comments below!) which challenged my perspective on this whole thing. This developer and artist made an incredible collection of games with their own art, and their story was amazing. And that lit a fire within me. I loved making content exclusively for combat, but the story got to me, and I realized something: I love combat focused games, and there's some people who love that too. But nothing will churn your stomach or flood you with emotions more than a good story. And that's something I want to evoke. I'm not an amazing storyteller, but I want to tell you all a story through this project.


Today's iteration of Hero Panic is shaping up quite differently. Combat is still emphasized. You'll still be collecting heroes with unique skillsets and fun powers. However, everything is much more story focused. There's lots of CGs, large character busts on screen for conversations, and I've made all of the art. Except animations, because forget that. I'll deal with those in post-production if I feel like it.


The art is quite different! My art style has changed and taken on a new life, and I feel it lends itself to the type of story I want to tell. Hero Panic deserves a fresh coat of paint for this purpose. So it's getting one! Character busts, a whole bunch of cgs, and an overall very different aesthetic. If you want to test it, you'll notice a departure from the older, place-holder graphics (all bright and pastel!) vs the newer, sketchy and abstract ones. Enjoy that dichotomy! 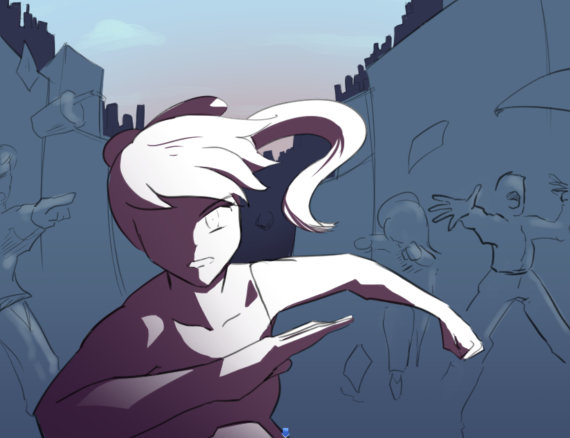 Rin running for her life. Such a nice scene!


Tone-wise, the game is much darker now. I want to prepare you for that.

I've re-written the story entirely from the ground up. Things have changed.

Have you played my demo for @JRL / Joanna? It's pretty dark and depressing! That will give you an idea of what I'm going for.

I've noticed that with a lot of my games: the tone shift. From TWIDAIABOY (when I worked with Luiishu535!) to @JRL, my games have taken on a darker, more satiric tone. This one, in comparison... well, it starts out innocent enough, but it doesn't stay like that. And it's not so much satiric as it is... well, just experience it for yourself. I want to know what YOU think about it.


Hero Panic is much more story heavy than its previous incarnation. Now it mirrors something like a VN infused with combat to break up the story beats. It's quite a hybrid, and I don't know too many games which head this route. Either they tend to focus on a traditional story-telling format (cutscenes and battles leading to the next story beat), or they go VN style (de-emphasized combat, if any, and a focus on story beats). In this case, it's both.

There's some great characters here that live in a unique world under exciting circumstances, and I hope you like their stories.


3. LOOKING FOR TESTERS FOR THE DEMO!

What!? That's right, I'm actually about to launch a demo! If all goes well, that is!

I'm looking for some volunteers to play through it and give me feedback, comments, criticism, and generally share your thoughts about the story and where you think I could improve.

It has some placeholder art assets in it, and it's not fleshed out yet, but I want to get some early comments as I push towards a demo.

It takes me 45 minutes to get through, but I know how everything functions. Look forward to about an hour of gameplay (minus the infinitely repeatable stuff).

Let me know your thoughts down below, and click subscribe if you want to keep track of how this is going!
Rin, studying away real hard. (Don't tell her the pages are blank.)

State of the game.

A preview of some battles in the game. Custom faces, custom battlers, custom backdrop. In this image, Marle from my game Archstone casts a rather familiar spell.

Another faction battle screen! But... who is it for? Who is she, and what is her story?

Close
12/01/2017 05:19 PM
Thanks kenlan! I hope you enjoy what I release this Sunday! I've been putting in some long nights to get all these systems in place. So far everything is coming along very well. Still got a bit of balancing to do, and I'm not done implementing all the features, but should have a good bit of content ready shortly!
AtiyaTheSeeker

In a way I feel good I couldn't submit this for the event in time. I think everyone would have enjoyed a good demo, but what I actually release will have a bit more polish now.

I have several of my characters in the game so you can put your own party together. There's different ways to unlock them (story quests, pwrsonal quests, exploration), and I want to make sure a good portion of them are accessible in the demo.
IllusioMan
0

author=IllusioMan
Hey, seems to be very interesting!!!
I want to be a tester.

Hey, thanks! You messaged me a long time back and I never read this. Don't know if you're still watching this page, but I'd be happy to have you as a tester when the time comes!

author=Novalux
Subscribed. Best of luck with the project going forward.
Edit: Sign me up for the demo.

Awesome, so glad you're following this project! I'll definitely put you on the list for the demo!
Pages: 1