This game is a work of fiction. All persons, places, religions, laws and names appearing in it have no relation to the real world. 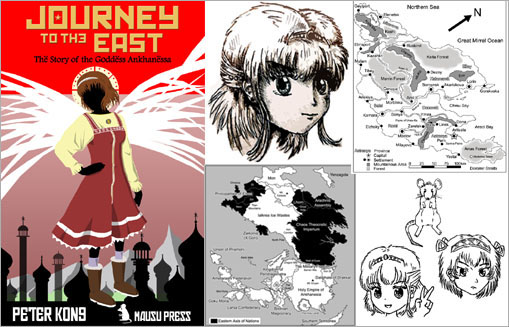 This indie game has an e-book adaptation by the creator, which is available on:

Enhance your playing experience by reading about the world of Eos.
MORE INFO...

Set in the magical world of Eos, a shadow is forming in the east across the demilitarized zone, which separates two powerful nations, the Chaos Imperium in the east and the Holy Empire of Ankhanesia in the west.

They have been in a state of religious cold war for over half a century. The Chaos Supremacists, led by the Imperious-God-Emperor, Xanaphos the Invincible, has been amassing an army the likes of which the world has never seen before. An army bred for one purpose – the total domination of the western-lands, and the destruction of all ideologies that do not conform to its ideals.

Meanwhile in the west, the Ankhanesian Empire is fractured. A civil war has gripped the nation, and the Holy Emperor, Cyrus I, is in a coma due to the trauma of the assassination of his wife and five children.
Their deaths are a total mystery because no bodies have been found.

The story of the game begins, 14 years later, when the fragile peace between the two nations and their allies, is suddenly destroyed.


The Northern Hemisphere of Eos and the Prismoni Union:
The north pole is located at the centre of the map. The equator is around the edge.
The shape of the supercontinent bears some resemblance to a phoenix. 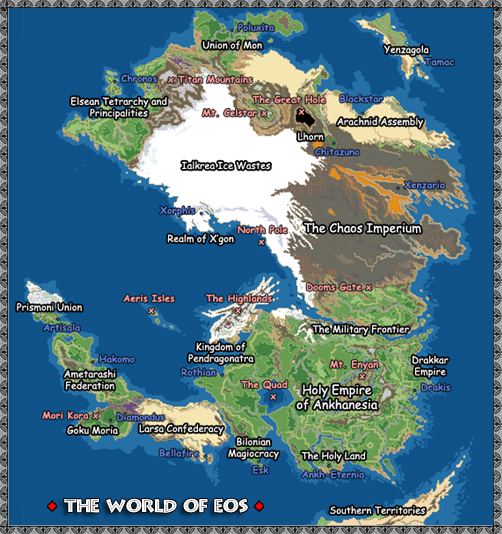 No random encounters. Enemies can be seen and have line of sight and their own behaviours. They have elemental strengths and weaknesses so a good strategy will save your life.

Random item placement and drops. Each playthrough will always be different.

All playable characters and bosses have voiceover.

No level grinding required. All enemies level up with the player. New allies will join the party at a similar level to the player. Certain gear will give the player an advantage.

The number of times you can use a skill is limited until you replenish it by resting or using potions. So that you can't spam the same strong attacks.
Use them wisely.

Day and night system with on-screen clock, seasons, and a dynamic lighting system.

Plenty of puzzles inspired by the game, Chip’s Challenge, a Windows 98 game to rack your brains.

What's new?
- A new journal log in the menu to keep track of quests.
- Optional side quests to expand the lore of Eos.
- Anya's backstory and mission that brings closure to her character.
- Secret places and new areas to visit on the world map.
- More weapons, armours and items including powerful "dark weapons".
- More class skills, weaponskills and special skills.
- Added a variety of fun and challenging minigames and puzzles.
- New characters to interact with, and bosses to defeat.
- Updated the gallery to include more information.
- More in-battle voices and music.
- Unlockable TP modes throughout the game.
- An epilogue pre/post-credits.

I would not recommend using an old save file from a previous version.
Although, the main story should still work but the balancing will be off, and you'll miss out on the new features that 3.01 has to offer.

What's next?
This is a major update so please let me know if you find any bugs/glitches.
The sequel to this game will get a little update in the future so that the continuity, graphics etc, is more consistant with this one.

Thanks in advance for playing. Hope you will like the update.

author=kero1
hi, I'm stuck on the Vandmir quest. How do I unlock Johns house? Its telling me to break into it to get the key to the factory.
great game btw! in-depth character growth and development. Cant wait to see how it ends.

Hello, Kero. Sorry for the late reply. To unlock John's house, you will have read Emilia's diary in her hideout. Check your journal for "Emilia's diary" and read the information on John's house. It will give you a 5 digit number with one number missing. From there, you just need to guess between 0-9. Hope that helps.
kero1
0

Close
05/24/2021 03:02 PM
thanks! Ive finished the game. 91% complete. Some side quests I couldnt figure out but I still had fun. puzzles were tricky like the turning statues in the church. Im a very impatient person so I died alot there lol.
My favorite character I would say was victoria. she was abit sassy and someone I can relate to so it was fun swapping her to team leader in party setup and playing as her. Overall I give this game 4/5. not perfect but characters and story were amazing!
Thanks for making this game!!!
jennyh
0

Close
01/21/2022 05:53 PM
I've been subbed to this game for a while and now I finally feel like playing. I must say, the beginning got me hooked! A lot of story though and uncoventional names to remember.
Firefly84