A game with a really interesting story!

Games that are made using RPGMaker are really difficult to get right. It is rare to create something that can stand out from the large amount of games that use this game engine. Default tilesets, basic battle system, uninspiring story, boring characters etc. These are the things that plague games made by creators that have put little to no effort toward its development.

Now let’s discuss this under-rated gem that I have been playing and recently completed. In fact, I have played though it twice and enjoyed it very much. Interestingly, I found that the second playthrough was even more enjoyable than the first because I was able to appreciate the characters’ circumstances more, with prior knowledge of the fantastical world that Nakoruru has brilliantly conceived.

Journey to the East is a game about the female protagonist, Risa, and her journey to the capital from her hometown in the far north of the country. Her main objective is to stay alive, and horrific creatures of all shapes and sizes are out to kill her. But the biggest question is why? This is the question that gets answered at the end of the game, and the answer will certainly not disappoint.

The backdrop of the story is an ongoing war and invasion by a militaristic nation called Elsea. They are waging war on the country of Prismoni, and laying waste to anything in their path to total domination. But Elsea is only the military arm of an even more deadly and terrifying power – The Chaos Imperium. A theocratic empire, hellbent on spreading its evil religion across the entire world.

This game has plenty of back story to entertain you, by that I mean a lot! Made apparent by the cinematic history lesson in the beginning, which spans thousands of years into the apocalyptic past. You can skip the intro of course, but I do recommend first time players to read through it since it plays an important part later in the story.

There are many sub-stories branching from the main story. The world is enriched by its own political and religious lore, and its large cast of characters, which cleverly intertwines with the heroine. The imaginative story is the main selling point of the game.

Risa meets a number of companions on her journey. Firstly, we have Karys, a smart-mouthed sorceress, who adds magic to the party’s skill-set. We then later get Anya, a happy-go-lucky archer that adds support from behind; Rauf, a young man who has gun and sword skills, and hits really hard; and Victoria, a tom-boy Bruce Lee wannabe with a sarcastic sense of humor. The main party is quite diverse and multi-national with conflicting ideas and backgrounds, which makes them more than just your average characters.

What I like about this game as well as the multi-layered story is the light-hearted banter between the characters, especially Risa and Karys: They are like yin and yang. Polar opposites of each other in their personalities. Rauf completes this trio by acting as a moderator between the 2 girls. He is the rational one who puts things back into perspective during the situation. Anya, in my opinion, is the odd one out since her story takes a dramatic turn development-wise, which will pull at your heart strings and leave you somewhat confused, disgusted and depressed. I won’t spoil it, but her “ending” will leave an impact on your psychological well-being for a long time.

Game play is quite simple and straight forward. First half of the game is linear and feels like an obstacle course with enemies and puzzles in the way. Second half is more open world with missions you can do in the order of your choice. I do wish there were more side missions though, that weren’t tied with the main story. Nonetheless, the main story more than made up for it.

The finale is what I found the most impressive about this game. Playing as the main character and going on a rollercoaster of emotions and hardships; the climax of the story is one of the most enjoyable and satisfying conclusions I have ever experienced in any media. With that said, I still want to know more about Risa’s future adventures, since her story hasn’t ended at the completion of the game, and continues for the rest of her life.

The game uses the front-view traditional battle system. It has plenty of lively animations for every skill in the game. It doesn’t get boring to look at because the enemies have damage sounds when you hit them, and they also have battler animations accompanied with their skill animations to bring them to life on the screen.

You learn skills automatically by levelling up. Additional skills can be purchased in the menu, and the skills you can acquire depend on the weapon equipped and the character used. To utilise these weapon skills, you need to play some rhythm game in-battle, which I found slightly too quick to my tastes. In spite of this, it is entertaining to look at and probably adds an extra layer of enjoyment to players who like that sort of thing.

The antagonists of the game come in many forms: Cruel, twisted and bone chilling. Bosses are terrifying, and the mastermind behind it all is incomprehensibly evil to the core. What I found fascinating is that the enemies are competent and frighteningly well organized in working toward the same goal with clear motives. They are well fleshed out and developed, as much as the main protagonists. Rarely do I get to see enemies as more than the generic cookie-cutter villain with zero back story and boring goals.

Maps are all wonderfully designed, considering that default RPGMaker tiles were used. In addition, there were a lot of unfamiliar tiles that didn’t seem out of place and fitted with the overall aesthetics of the game. The lighting and weather effects, which are gorgeous to look at, really make this game stand out from the average looking Maker game.

The story takes place in a fantasy world with European flare. More specifically, Russia, since the Russian sounding names of places and people used. However, I can deduce that other parts of the world are loosely inspired by real-life countries from the surnames of the characters e.g. Merkel is German, Williams is English, Fujisaki is Japanese etc.

Maps are well connected and quite varied. I like the transitions from the snowy maps in the north, the forest areas further south, then finally the city maps of the capital. Dungeons are well designed and easy to navigate, with the exception of one or two that you are meant to get lost in since they are part of a puzzle.

This is one of the highlights of the game. The selection of music played, and how they were used to evoke a certain emotion during a certain event. Timing is important here and how it tied into every cut-scene. It certainly felt like watching an interactive movie sometimes.

I particularly enjoyed the music played during the part where Risa’s past is revealed, and her powers have reawakened. What an epic and memorable moment! 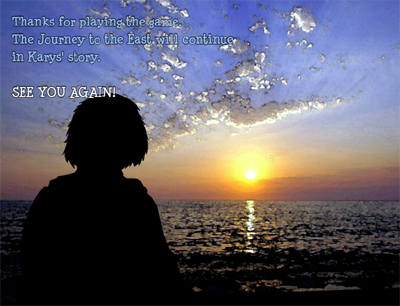 Overall the game is impressive. It is evident that a lot of effort has gone into it. The story and characters will certainly pull you in and leave a lasting impression. The battles are fun and pretty to look at. The music is pleasant to listen to. I hope this game gets more recognition in the future.

Close
06/09/2019 08:03 AM
Thank you so much for the great review, Flurry! Yep, the story, I believe is the strong point in the game since that is where I put the most effort into developing.
Characters have been in the making since I was a kid. I even keep a notebook at home so I won't forget the minor details.
Lots of interesting things about each character that I haven't had the chance to cover in the game such as Karys and Rauf's tragic childhoods and how it would later affect their lives. The 5 main characters (as shown in the character select screen), would eventually come together and play a major role in shaping the future of Eos.

Oh yeah, I know what you mean about Anya ;D
laithplays
0

Close
06/15/2019 12:17 PM
I have complete this game long time ago i was on another website and you were helping me and my friend anyways hoow is the part2 of the game going i wonder when it will be completed because i really enjoyed part1 and thank you.
Nakoruru

author=laithplays
I have complete this game long time ago i was on another website and you were helping me and my friend anyways hoow is the part2 of the game going i wonder when it will be completed because i really enjoyed part1 and thank you.

Part 2 is still a demo. I don't want to keep your hopes up, but it will be a while until it is completed. Real life has caught up to me and I haven't had much time to work on it. But I will eventually get back to it.
Pages: 1