Grimps: A Christmas Puzzle have been updated to V 1.2

Changelog:
- Fixed a graphical error where the screen flashed black sometimes when moving between maps
- Replaced an Ice Block with a wall in Level 4. The Ice Block enabled the level to be beat in an unintended way that made it too easy
- Added a game launcher to be more inline with my other games

I've released an expansion for this game! Squeaking of the Dead features:

Go to Squeaking of the Dead

I'm a complete newbie when it comes to video editing and trailer making. But decided to give it a try as it could be good to have one around.


Feedback would be appreciated. Is it too short? Are the cuts too fast? Does it end too abruptly? 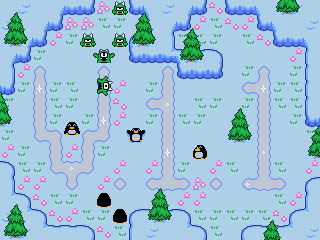 Fixes:
- Should run without the rpg maker 2003 RTP Installed
- Credits screen brings you back to the title screen instead of shutting down
- Lowered the timer for a secret to trigger

Alternative:
- Go into the data folder
- Run the RPG_RT.exe

Hey people, every other critter, demonic beings or aliens that might read this. Figured I just write down some small notes about the project, what went wrong and right etc.
The whole thing kinda started on a whim as I was just doodling some pixel art and randomly drew a penguin. Then I remembered I did a bunch of snow tilesets for Grimorb Nine so I imported them and just started playing around.
So in total I’ve spent about two and half week working on this. Somewhere in the middle I took a week off and did the RMNlypics, which is hindsight it might have been better to spend that time on Grimps. But I had a lot of fun doing the event so I really don’t mind.

Art Style
My main goal with the graphics was to make something that felt cozy and cute. Something nice to hang out with for awhile. My main inspirations beings Adventure of lolo and Bubble bobble. But unlike them I wanted it to feel more like it was taking place in a world and not so much abstract areas. Overall I’m really happy with the results.

Level Design
Basically all the mechanics in the game is just tropes from the puzzle genre. It’s pushing blocks, collecting keys, and hitting switches. While nothing revolutionary I feel like I managed to put them together in a fun way. As mentioned above I wanted it to feel like you journeyed through a world and I felt like I managed to convey that through the environments.

Time
I wish I had a little more time to do some additional levels as the game is a bit on the shorter side. Neither did I really have time to playtest the game probably and had to go on my own intuition on how difficult the puzzles would be. I did manage to do one playtest at the very end, and I think the puzzles worked out fine, but a tad on the easy side. Would also wanted to developed the boss a bit more as mentioned below.
Due to the short time I ended up dumping a bunch of last minute work on the sound/music guy which I felt pretty bad about. But he did a great job and I’m really happy with how the game sounds.

Boss
The boss was the last big thing I build (except a couple of maps to extend the intro a bit). Overall I’m happy with all the effects and how the boss looks. But I feel like it turned out a bit too easy and I didn’t really have time to fix it. I would have liked to have the boss phases change a bit more than just speeding up. As now (spoilers) you basically can’t get hit as long you keep on moving.
But at two in the night the speed up felt good enough.

Name
For some reason I never googled the name before I released the game. Turns out there is some children's cartoon called “The Grimps”. Had I done this sooner I’d probably called it something else as for now it’s not a very google-able name.
Pages: 1