The Last Fight Of Your Life

You don't see a whole lot of games with time limits nowadays, especially with RPGs. The idea of fighting the clock in a turn-based RPG has you thinking fast and acting faster, and when you're literally fighting for your life in Rxcovery by LOVEgames, you'll want to make sure every second counts (in theory!) 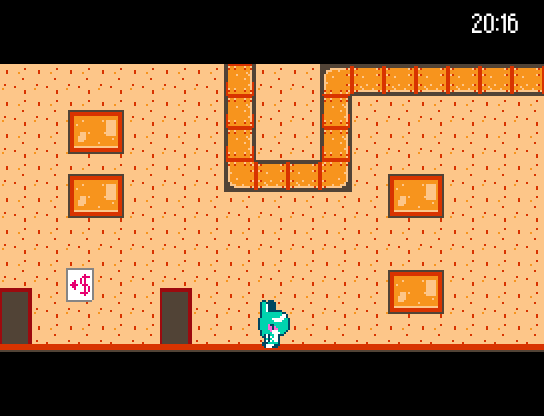 Ezo, a rabbit-like humanoid, finds himself waking up in a hospital with only 30 minutes to live, as his insurance will only afford him life support for that long unless he can gather a large sum of money before his time is up. Doing so involves exploring the large hospital, fighting monsters, and picking up loot along the way.

In some ways, Rxcovery feels like it has many of the trappings of a pixel horror game, between its cute character designs and little details like battles being represented by shambling nurses that chase you through hallways is a fashion not unlike Resident Evil. The audio throughout the hospital is also very tense, and adds perfectly to the high-speed urgency that the game is shooting for. But Rxcovery isn't really about scares and horrors, and is much more focused on combat. Its very commendable that the game isn't afraid to use RPG Maker's battle system as part of its narrative, which isn't a common thing to see in games in this general style.

Characters progress in a way similar to that seen in the SaGa games, where using a specific type of weapon or ability will increase their stats accordingly. Using a sword will increase Attack, and using a gun will increase Agility. My party seemed to advance their stats very quickly and, before long, I was wiping the floor with enemies that nearly one-shot my characters at the game's start.

To be honest, gameplay balance seems to be the biggest issue with Rxcovery. The actual difficulty of any given fight is a crapshoot at best, and the difficulty range of enemies you can encounter in an area is massive. In addition to the helpless mooks I could whale on for easy stat gains, I could also find myself in encounters with monsters that could destroy my party on the first turn, and this isn't including the special encounters that will always kill you if you don't run away. Thankfully, I never had a problem escaping combat, so if I found myself in a fight with something ridiculously strong I could always flee. 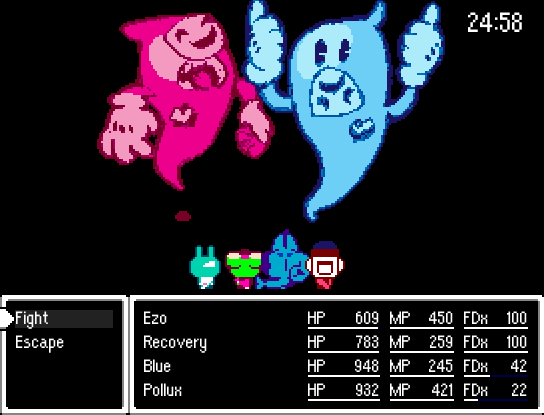 Boss battles also seemed to boil down to just using my (very, very strong) limit breaks as quickly as possible before getting creamed, which is unfortunate because many of the boss fights had special dialogue that added to the game's mysterious story. Yet with any boss after the first, it was too risky to let the fights play out as intended.

Balance issues aside, the battles are quick, fun, and feature some charming animations and monster sprite work. A lot of love was put into the game's character and monster designs, especially the bosses, which have a very nightmarish design to them. And it's all bought together with some of the catchiest battle themes I've heard in a while.

Everything plays out as your 30 minute timer continues to count down. This includes time spent in menus and battle, so equipping your party usually has to be done on the fly. There are a multitude of skills and equipment to choose from, but most of them don't really do much besides dealing damage, and with stat growth advancing as quickly as it does, the best thing to do was just hit Optimize and not really think about it. Once your 30 minutes are up, you can start a New Game+ and carry over some of your progress to the next cycle. All this really meant was that I had to go recruit the characters I wanted again and picked up where I left off, so the timer's actual urgency is somewhat mitigated by this. By my second cycle, I stopped worrying about the timer entirely.

Rxcovery is a game that has the right idea, and it's one of the more unique combat-focused RPG Maker games I've played in quite some time. With a good round of rebalancing and a bit of polish, this could be something special.