It's A Hard Bug's Life

Not too long ago I went back and watched a few old Pixar movies. And it made me wonder “What if A Bug's Life was a heck of a lot more gritty?”Well, I don't think we're ever going to see the PG13-rated reboot of that, but Mownt: For Peace by zDS might give us an idea of what it would be like.

Mownt is a short RPG made for the IGMC 2017 contest, so I went in expecting something fairly basic considering the month-long development time. But what I found ended up being one of the most interesting RPG Maker games I've played this year. 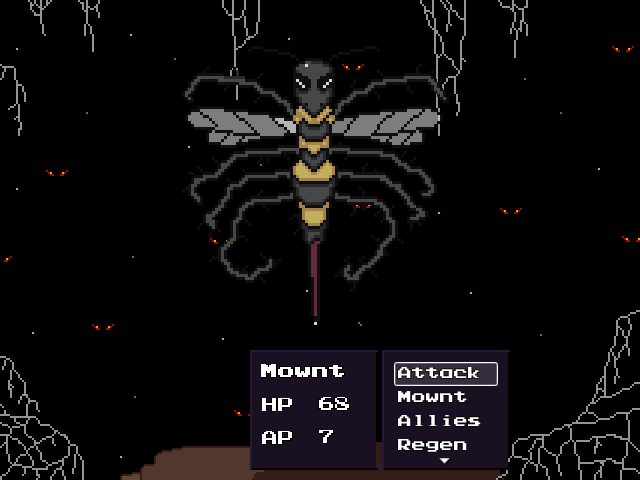 Mownt pits the player as a member of the titular race of insect people, which are sort of a grasshopper-like creature with basic telepathy. Your goal is made clear immediately: Your people are faced with the threat of a rival race of ant people called the Colonists, and you must make choices that will lead your character to a prosperous life, ultimately boiling down to your decision to wage war the oncoming threat or lead a life of independence.

Regardless of the path you take, the Mownt will frequently find himself in battles not unlike those found in zDS's previous game Three Ghostly Roses. Your character will always fight solo, and has a small handful of abilities available to him from the start, each with varying usefulness. You will fight a handful of battles on each playthrough, ultimately leading to an ending in the ballpark of five and fifteen minutes apiece. Each playthrough you complete will carry your progress over to the next, where your character's level will increase, unlocking a new ability, and may have enough experience to purchase MP upgrades at various points around the map.

What's interesting is that the choices you make will have a direct effect on your abilities in battle. Along the way, characters that you befriend or otherwise ally yourself with will be available as summon abilities. For instance, choosing to start a family at the beginning will give you the “Family” summon to restore large amounts of HP. The catch is that this will also have an impact on what ending you will receive and if you want to see them all you will have to forego gaining them as much as you may want otherwise.

This makes the combat a lot more varied than it initially suggests, as almost every playthrough will require you to use a different skillset, with completely different tactics. And for the most part, every ability has a place and a use, with the sole exception being a telepathy skill that you start the game with that I almost never used. And by the time I unlocked the final two paths, I had enough HP to brute force a lot of the endgame anyway. Aside from that, the battle system is finely-tuned and most of the fights were a joy to play.

Visually, the game has a sort of Dragon Quest vibe to it, with serviceable custom pixel art. Battles were a bit too darkly-colored at times, and the very brief battle animations made the combat fly by and was sometimes difficult to keep up with in some of the more complex encounters. Nonetheless, every enemy I fought was wholly memorable and it's inspiring to see a whole set of custom assets being made for a contest game.The music is similar to that found in Three Ghostly Roses: very low-toned metal, and generally setting the stage for the many grim occurrences that happen within the adventure.

Mownt is only completed once you have unlocked all of the endings, and a good handful of conveniences are given to you as you complete more of them. You'll be able to skip trivial encounters and see any endings you have finished already. One thing that irked me is that you always start the game in the Mownt village, while the portal that chronicles your progress is accessed by talking to an NPC. I had only checked this after my first ending, not realizing that another NPC had eventually appeared inside that portal that would have let me skip certain sections of one of the longer branching paths. Unless I missed something, I wish that had been a bit more clear. 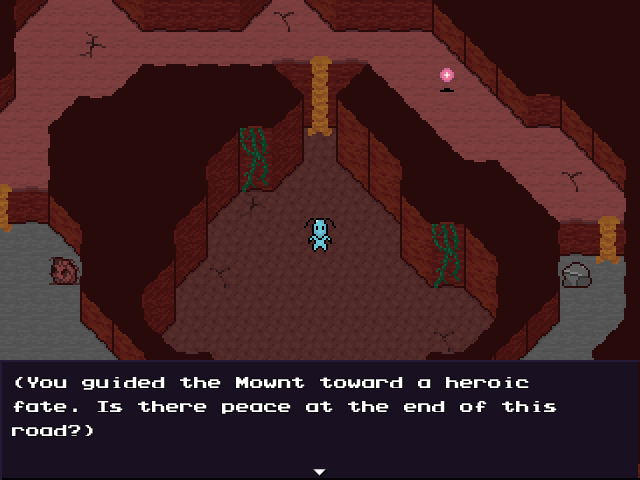 Once you finish six endings, you will gain access to the final two, and I had everything wrapped up in just over an hour. The twist as to what unlocks the final two routes is a bit out of left-field. But ultimately everything eventually ties together in a meaningful way to both the player and the Mownt. You will see your Mownt cherish his happiness, you will see him suffer, and you will see him fail time and time again. And while you may feel a deep guilt about what you are doing throughout the course of the adventure, the ending will leave you feeling like you were part of something much bigger.

Overall, I found Mownt: For Peace to be a fun and meaningful adventure, and very impressive for what it accomplishes in such a short amount of development time. It builds on the formula of Three Ghostly Roses well and I'm excited to see where zDS goes with his next game.

I for one am glad you liked the ending. That has been more or less mixed as it depressed some folks.

I do plan on making it more clear about the clinger fight skip. Perhaps i can have the player start in the room where you see list of endings got opposed to the Mownt area.
PsiSteve

I don't think there will ever be any major changes, but there have been talks of a possible sequel down the road.

Anyway, thanks again for this review. I'm glad you had fun.
Pages: 1