1 reviews
Save to Dropbox
Traverse a world of magic in this classic role-playing game full of exciting battles, dungeons, and secrets. Lost within the turmoil of Astravia's past, you and your companions must find a way to unite its people before the Cataclysm brings forth another age of ruin.

This game is in active development. The demo has been released to allow players to get an idea of the game before launching the first chapter.

Journey and explore various dungeons, caves, and towns with challenging puzzles and quests.

Build your team with a selection of characters and interchangeable abilities.


Story
The world of Astravia is in conflict; severed by unrest between mysticians and humans who fear their magic. Once seen as heroes, the flow of time eroded mysticians’ feats into myth, and so anyone who shares their likeness in the present day must instead hide from the ruling country of Valica and its brutal knights.

Thus, the wandering mystician Oliver must tread with caution as he escapes the woods of a Valican territory. Spared by a mysterious assassin and at a loss as to how he got there, the stakes are raised even higher when Oliver realizes he must pass through Valica's capitol in order to find answers about his own origins.

"Legends of Astravia", and its story, characters, and themes within © 2022 Studio Alemni LLC

Additionally, I am disappointed to admit that life has gotten in the way, and the time I've been able to put towards development has be heavily reduced from what it was at the beginning of the year.

However, I am currently investigating some options that may permit me to get a little help with the project in order to mitigate the loss of progress I've had in the past couple of months. If all goes well, the pace of development should improve.

Release Date Change
I'll start by ripping off the band-aid: I have set Chapter 1 of the game's release date across all sites back to "TBD". The anticipated release for the end of this year was already a pretty soft deadline, but I'd like to call it early to ensure anyone following the project and expecting to play a full game by the end of this year is not mislead.

It has been very challenging to uphold the same momentum I had a couple months ago, and I'm just not certain that I can pull through for the rest of Chapter 1 at the same pace. Game development is kind of like running a marathon--and I've used up a lot of energy sprinting with both the demo release, maintenance, and other things discussed in the prior log.

I think the new date won't be terribly far off--Spring of 2024 is feasible. But I'm not going to set any formal dates until I am certain.

With that out of the way, let's see a little progress.

Mordin Village Progress
The next area of the game, Mordin Village, continues to be worked on. Being the first real "town" area, it will have a lot of additional characters, some side quests, and a big portion of the main story. 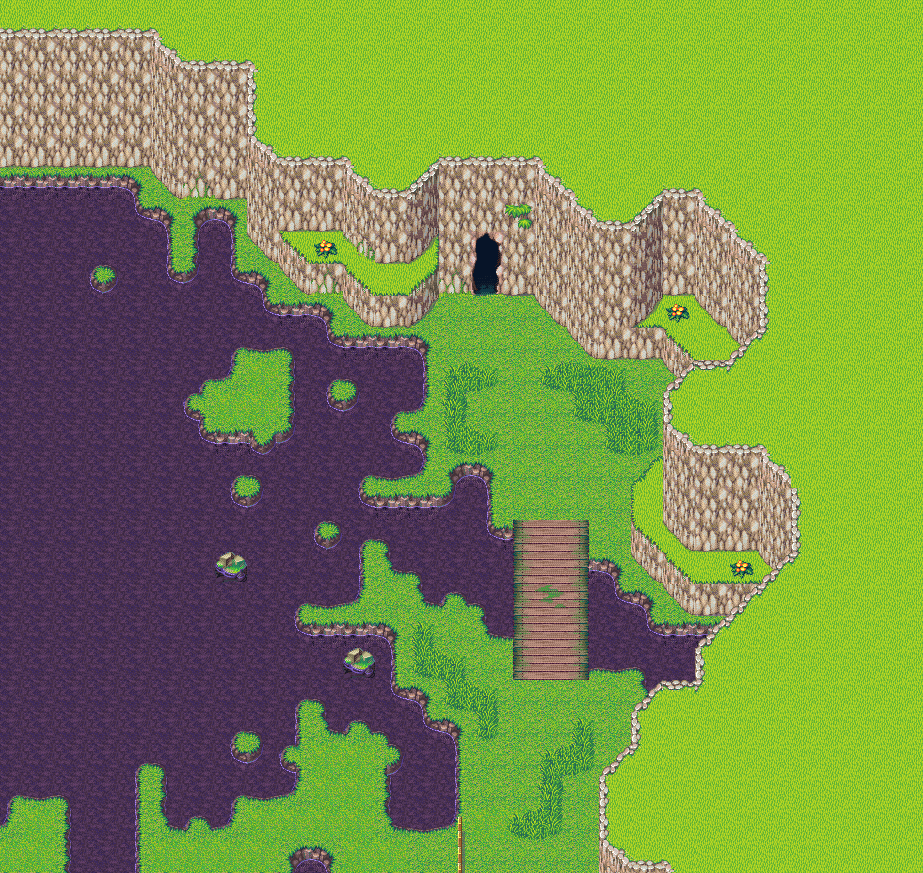 The base maps are finished now, and just need to be polished and have the actual events added to them. I think the new structure of the town is much more fitting, and makes it feel like home. Also, by splitting the map up into a couple of separate areas, it will help prevent any lag present in the original. 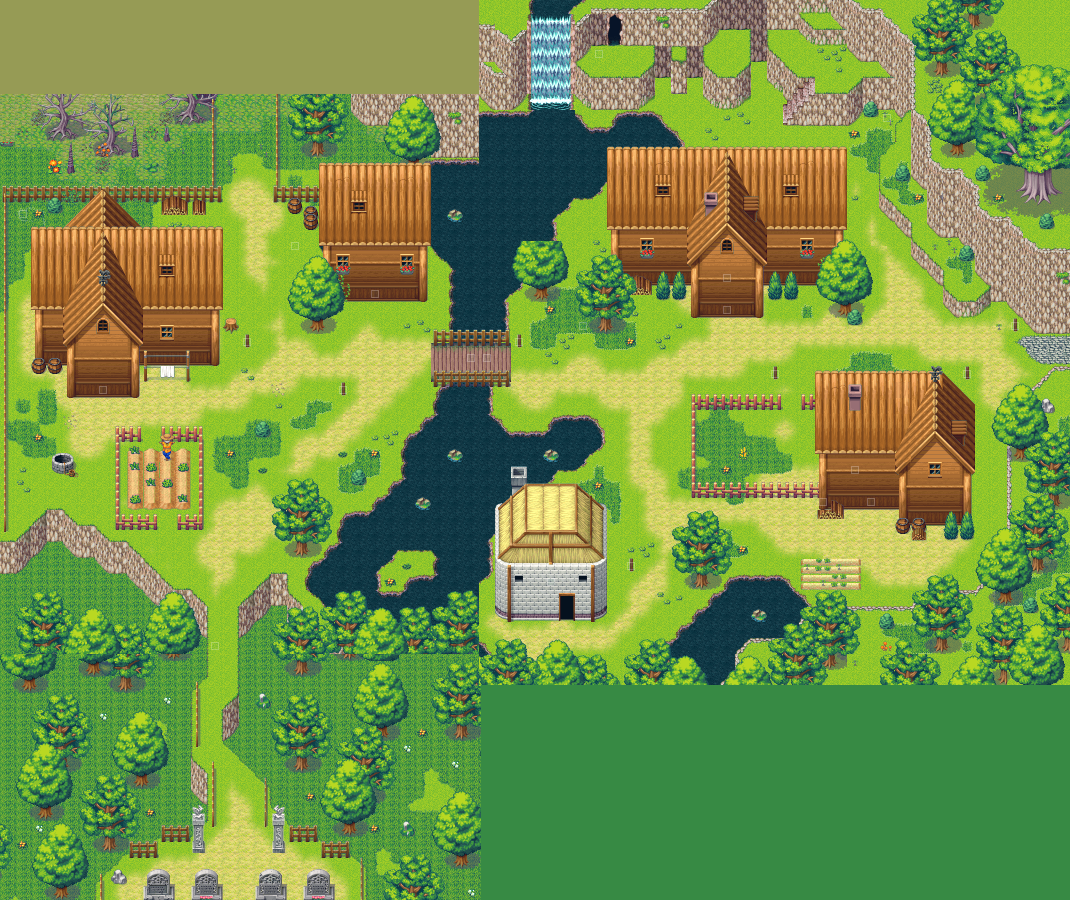 And here's an in-game shot: 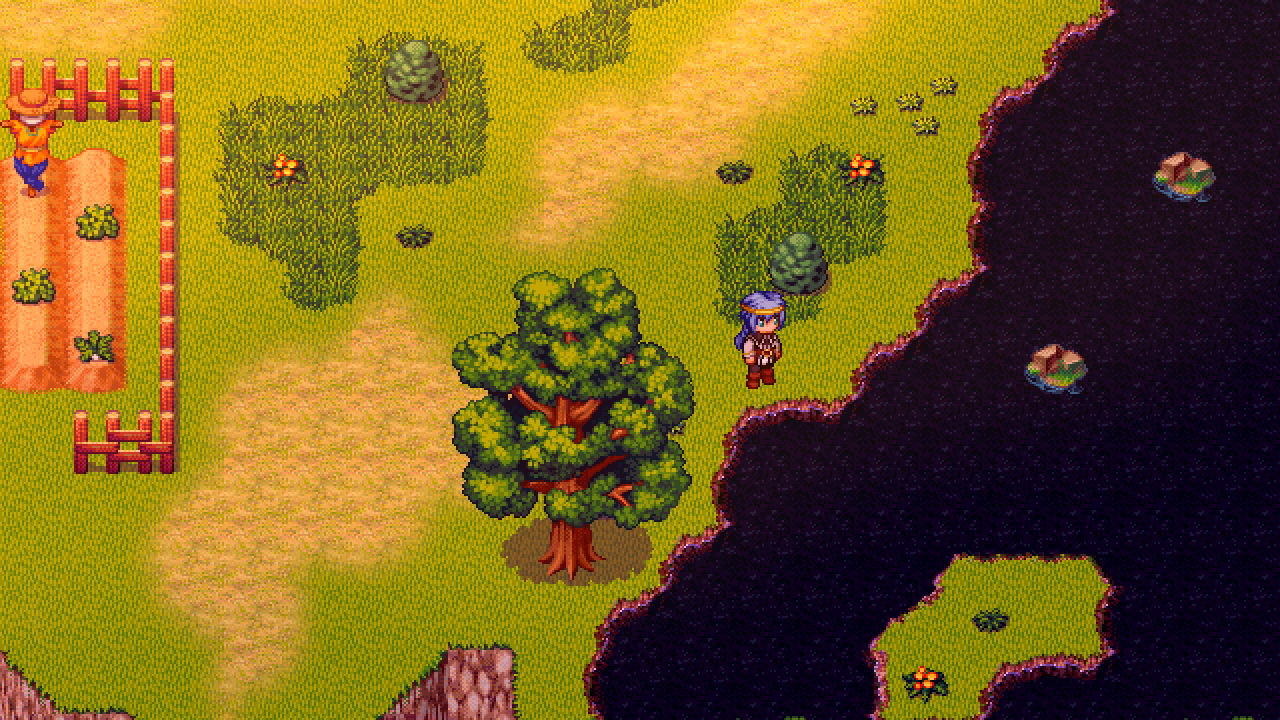 NPC faces have been put together as well. My goal for the various towns of Astravia is to give even minor characters a bit of agency, and not have them be just scarecrows that sell you items. Nearly every member of Mordin Village will have their own personality and distinct relationships with other members of the town.

Engine & Features Progress
I was able to address some pretty big problems with object collision (i.e., walking into an enemy or door). In the demo, it was pretty apparent that certain enemies would seemingly cause a battle to start even though they were several tiles away from Oliver, or the doorways would trigger in an unusual way. This will no longer be an issue.

I have some improvements in mind for wall collision as well, that will hopefully both help with performance and also some various issues reported with clipping. These are pretty intensive, and will take me a bit more time.

The battle system changes discussed in the previous log are still being worked on, and just a few more features need to be added / tweaked.

That's all for now. As always, thank you for your patience and continued support. I know many of you are eager to play more of the game, and I am so eager to share more of the world with you. I hope to have more fulfilling progress updates in the future.

The beginning battles could be quite difficult if I didnt get the better sword, especially if I stumble into one of those 3 mushroom groups. In fact I died once to one of those. Where was teh escape option? Also big thing, defend is literally useless. It doesnt seem to decrease damage at all whatsoever.

Anyway the demo is pretty good but there's a moderate heaping of cliches. I really like all the secrets and stuff, they can be easy to miss but dedicated secret hunters will get a good challenge. Pays off too, the better sword in particular is EXTREMELY useful.
Jaiden


Thanks for the feedback! Yes, demo is quite short right now, the game is still heavily in progress, so I can't wait to release more.

I have received feedback that those battles are too tough. The troop of 3 is definitely not supposed to be there, so I'm going to fix this next update for sure.

The escape option was touched upon in the battle tutorial, but I think I need to make it more clear to the player.

Well, dang, defend is indeed useless. Thank you for pointing this out, that's definitely a bug that will be addressed next update as well.

I'm glad you liked the mapping and the secrets. This is a sort of weird XP/VXA hybrid, but the mapping is all done in XP.
Starmage

Close
02/26/2018 08:29 AM
I have tried out the demo and wow! I really am enthralled with how atmospheric everything was! The mapping was very nicely made and I noticed it is using the XP tile-sets, and I've always loved the XP tile graphics. xD

The battles were fast-paced and fun (though I did quite a few times with the shrooms >.< ).

Still, I know it is in demo phase, but I can already tell that this is going to be a great game! :D
jpetersjr
0


Thank you! I hope you enjoy it :)
Shade_Hunter

author=OzzyTheOne
Only now I have realized that I was not subbed to this gamepage yet. I fixed up that mistake!

OZZY HOW COULD YOU

I'll be sure to be better about updates here for you and all the lovely subscribers.
NoBody13

author=NoBody13
How come I've never seen this? Looks so good!


Thank you so much! I've been neglecting updating the RM page I admit--I have monthly devlogs, but never get to posting them here.
NoBody13

author=NoBody13
How come I've never seen this? Looks so good!

Thank you so much! I've been neglecting updating the RM page I admit--I have monthly devlogs, but never get to posting them here.


I will definitely be here for all the updates :)
JosephSeraph

Close
03/09/2022 09:20 PM
ok i just realized one thing and now i have to ask HOW DID YOU MAKE RPG MAKER XP FEEL SO FRESH AND MODERN AND RESPONSIVE AND CLICKY
i REALLY thought it was MV like omg
no compatibility issues, no weird lags and hangups, no RGSS crashes or whining, nothing. Just pure unbothered bliss. I'm shocked
Jaiden

author=JosephSeraph
ok i just realized one thing and now i have to ask HOW DID YOU MAKE RPG MAKER XP FEEL SO FRESH AND MODERN AND RESPONSIVE AND CLICKY
i REALLY thought it was MV like omg
no compatibility issues, no weird lags and hangups, no RGSS crashes or whining, nothing. Just pure unbothered bliss. I'm shocked


Golly thanks! Well, the secret sauce to making XP buttery smooth & MacOS compatible was mkxp (same sauce that To The Moon & other Freebird games used).
As for the lack of RGSS crashes, hopefully that's just because I've gotten good enough at writing Ruby code!
Pages: 1