Sandy and the Christmas Card Caper

Sandy and the Christmas Card Caper is a short adventure for Sandy Seltani, a shy little witch (already playable in Landy Land, a game made 1 year before this one, go and check that one, I already talked about it here and it was fun!) that is tasked by the school principal of the Bellinghouse Boarding School to deliver some christmas cards. A simple premise for a short story that it's very typical of Healy's style (I reviewed a bunch of other games from this developer in the past), so I know exactly what I can expect here: many humorous dialogues and interactions, including with many items of the scenarios that are useless for what concerns the story and the task but surprisingly amusing, and funny characters that comes to life due to the use of different expressive facesets and other carefully chosen resources. 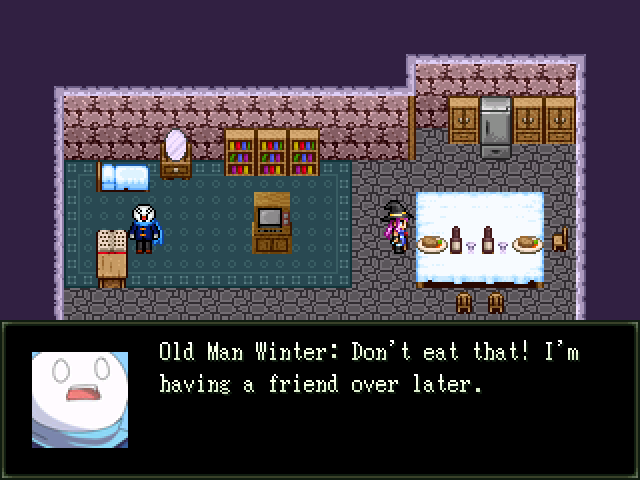 Oh sorry, I just checked if it was made out of plastic!(see Landy Land for this! Or just the review!). Anyway now I'm sad it was not for me!

So the gameplay is simple: we go around looking for people and deliver the cards while exploring the school and taking to quirky characters. As I said before, take your time and try checking the various environments for added fun, for example do not miss to use the television in Sandy's room. The various characters are also likeable, especially Sandy of course, and the story is light hearted and complete with a little twist. Nice! There are no puzzles or battles of course, but for a 20-15 minutes comedy game there is enough content, and this was also made for a Secret Santa, so it's pretty perfect as it is.

And now let's speak about the aestetics: mapping is ok, I mean there are about 14-15 maps and for the most part they use RTPs or resources from the White Screw Shop and VIPRPG. This is a good thing since all these are similar in size and style so they complement each other perfectly and makes the game more interesting than using RTPs only. This means the presence of lots of facesets and charsets that aren't the usual Alex, Zack and Falcon (even if there is Burns, and Sandy is just a little variation of the pink haired witch Carol but these are exceptions), that surely help making this game look different from the other Rm2k/Rm2k3 games.
Finally the music: unsurprisingly there are many typical Christmas songs and you may even change the one you are listening to in a particular room, so that's ok, fits the theme and I guess that there is not much else to say.

Final Verdict
Christmas Card Caper is a cute comedy game and a really nice Christmas Secret Santa. It's cute and competently made, and entertains so much that I'd probably take it as an example if I'd need to make a small project, due to so many funny little scenes and interactions that greatly enrich with a particular atmosphere an otherwise standard fetch/deliver task. No really, I'd like to see more adventures of Sandy (ok I know she also appeared in Landy Land that I reviewed some times ago, still... I ant moar!)!
Well done, and Merry Christmas!