The What-Iffers in: Final Fancy

The What-Iffers in: Final Fancy is a puzzle game about a group of friends who like to roleplay in VR. It’s not a very long jaunt, but it packs some good stuff into a small package and doesn’t overstay its welcome. It was made for IGMC 2017, which partially explains its shortness

I think they’re mostly RTP? One of these days I swear I’ll pick up later RMs and learn to recognize this stuff. It doesn’t make much difference to me because it all fit together just fine and there were no inconsistencies in the visuals. That said, the maps tend to be rather visually bland without much going on in them. It’s not bad mapping, but it could use some smaller details here and there.

Again, pretty sure it’s all RTP. I recognized the sound effects and I remembered one of the songs from the older RM days (restyled for the newer maker, of course). It’s standard RPG stuff that didn’t jump out at me much, but it still all fit just fine (the credits song is a sweet remix though).

Gosh, I hope I’m not making this sound too bland. There’s good stuff in here, I swear!

This is where we start to get into the charm of this game. As before, the What-Iffers are a group of student friends who like to put themselves into various game scenarios through some sort of VR thing called L.U.S.I.D.

This time, they decided to play around in that very popular RPG series, Final Fantasy Fancy. There are five members of the group and their instructor...or something. The game doesn’t get real heavy into the details, but it seems as though their club is sponsored by their school. Or something.

Each character has their own voice, but I dunno how I feel about the way that effect was achieved. It’s done by making every character noticeably distinct, by which I mean their dialect varies drastically. Hearing them all talking together in real life would be weird. Diversity is nice, but sometimes you feel like everyone’s a token, y’know? In spite of this hangup, they have a pretty good dynamic between them all. There’s the ‘normal guy’ John, the formal-n-serious Shemri, the chipper-with-an-accent Cherry, the likes-to-use-big-words Adrian, the drill-sergeant-esque Noab, and the obligatory-self-insert Aubrey. They’re written well and the dialogue flows naturally enough, but they’re a little rag-tag for my tastes. 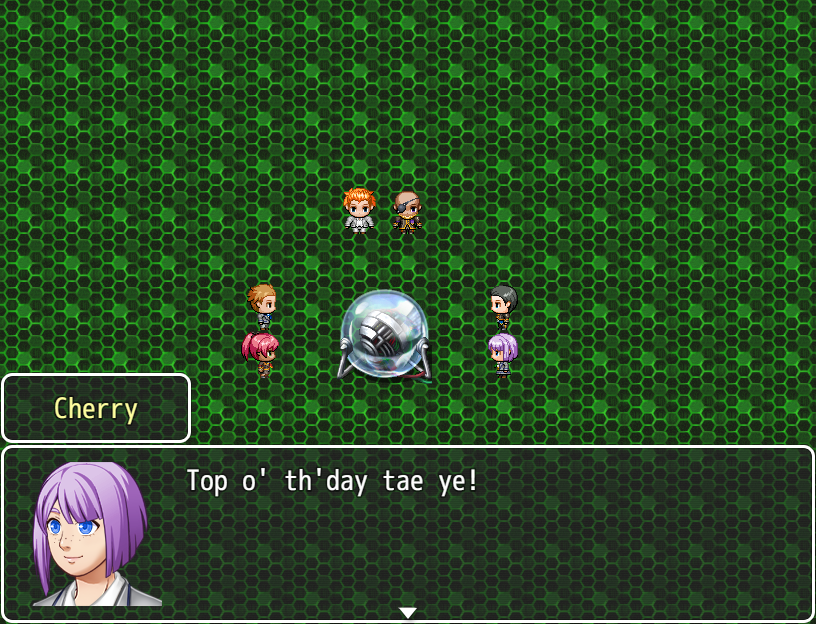 So they all hop in this game together and awaken into their roles. Aubrey, John, Shemri, and Cherry become the hero party, Adrian assumes the role of villain, and Noab is their ghostly tutor man. They’re all trapped in Adrian’s prison of puzzles that he designed to keep the heroes detained so they could not fulfill a prophecy about his defeat. That’s all the more complex the plot gets, but the characters all have some banter at the start of each puzzle, so you still get to know them and see as they enjoy their time together. Tutorials and primers are told through their dialogue, so the writing merges with the instructions. It’s a nice touch!

One thing that did bug me a little about how it’s presented is the use of ‘OOC’ moments and text emotes. The face sets already have different expressions, so...I don’t really know why the emotes are necessary. I can understand the need for Out of Character better, but people unfamiliar with the acronym may not get what that means. 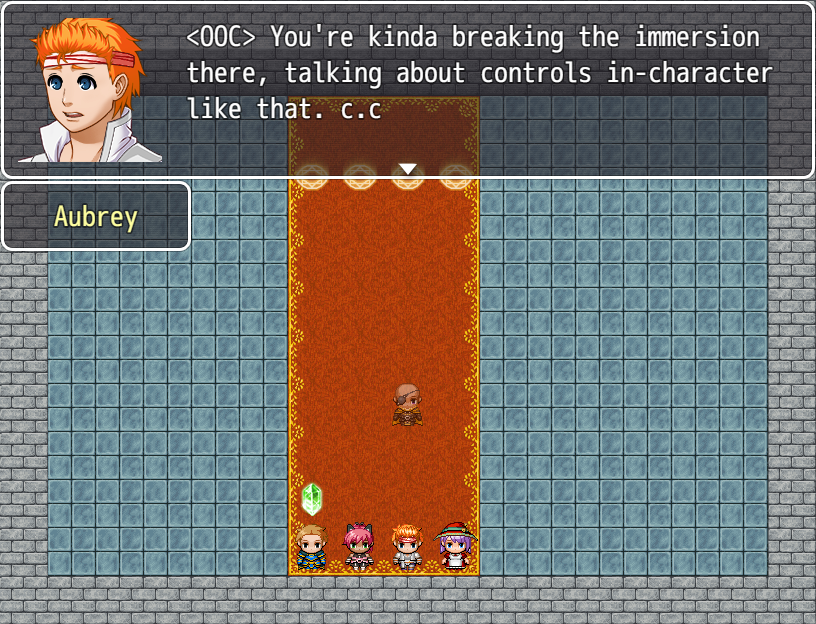 And you pointing it out is making it worse! >_>

<OOC> I’m nitpicking. I need to move on from here. XD

This is where the game really shines. It’s a puzzle game, yes, but it puts some very clever mechanics to use in a lot of interesting ways. The goal of each puzzle is the same: have one character occupy each of the demonic summoning circles to clear it. You can only control one person at a time, but you can cycle through them at will, and the cycle goes two directions so a character you need is always within two presses of a key.

On top of moving independently, each character has their own special ability to contribute to solving the puzzle. Shemri has the ability to jump over gaps, so she’s needed anywhere you have to cross a pit. John has a magical barrier that can block the flames from fire imps. Aubrey can swap places with anyone in his direct line of sight. Cherry has a fireball that can destroy ice golems. The first set of puzzles cover the basics of all these mechanics. After that, it’s your understanding of how to use them vs. everything the dungeon has to throw at you. I gotta admit, the first step out of the tutes is kind of a doozy. 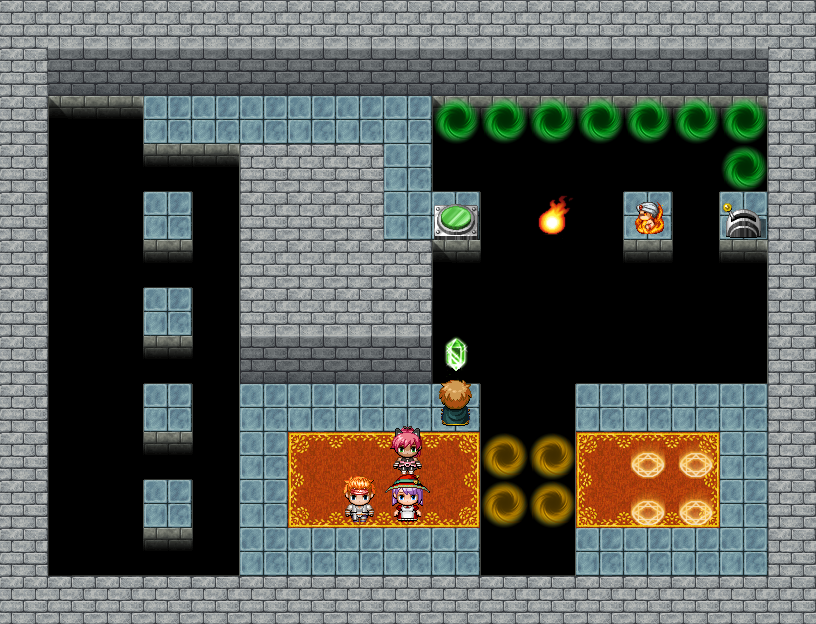 The training wheels are off.

It would’ve been nice of the developer to back up that fire imp by even just one tile. The timing required to solve this puzzle is remarkably strict. You need to be conscious of which keys you need to hit before attempting it, or you’re gonna get burned. When hit by a hazard, you have to start the puzzle over. Most of them aren’t long enough for this to be a problem, but the tight timing on the one shown here seemed like a bit much for out of the gate.

This game does have mercy on you, though. First, it’s not required that you clear all the puzzles to advance in the dungeon. There are three cells with six puzzles each, and you only need to do five of them to move on. You’re also given hints on how to beat the puzzles if you fail them three times. 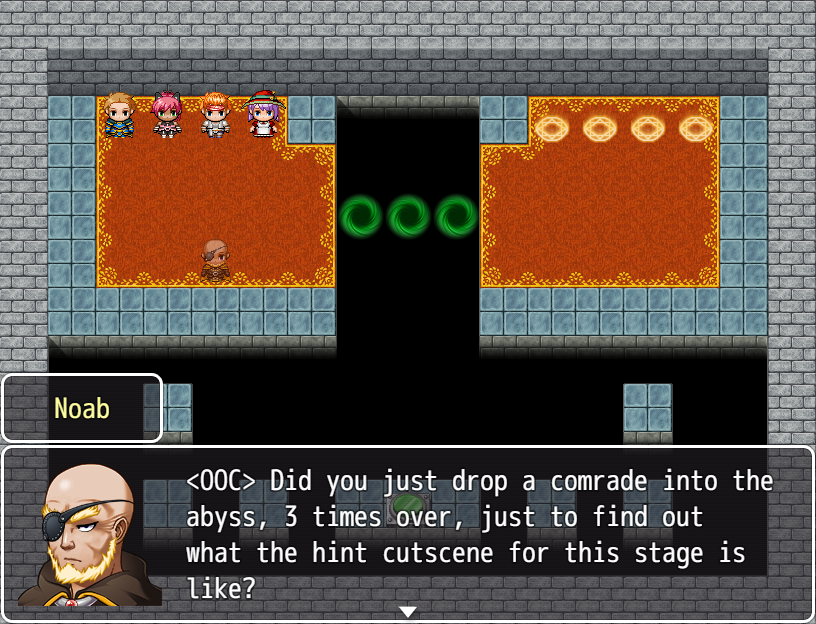 No, I accidentally made Cherry burn them to death. True story.

The hints are delivered through dialogue as well, so you can glean some additional characterization from them if you like. And even if you still can’t solve them, you can reset or exit a puzzle at any time from the pause menu.

There are 18 puzzles in all, but with the first six being instructional, the other 12 comprise the meat of the game. It makes good use of all these mechanics and some of them can really make you think. Some are more gimmicky than others, but it’s all very clever and well put together. The only one I didn’t like was the old classic rock-pushing nonsense.

This game is short enough to clear in just about an hour, but it’s an enjoyable brain teaser. Although I did have fun with this game, I also ran into some technical difficulties while playing it. Some of the custom controls for character swapping will also advance text. Any dialogue can be repeated by visiting the puzzle again, but that’s kind of a pain and something to watch out for. Of greater concern were the slowdowns I often experienced and a nasty little crash as well. 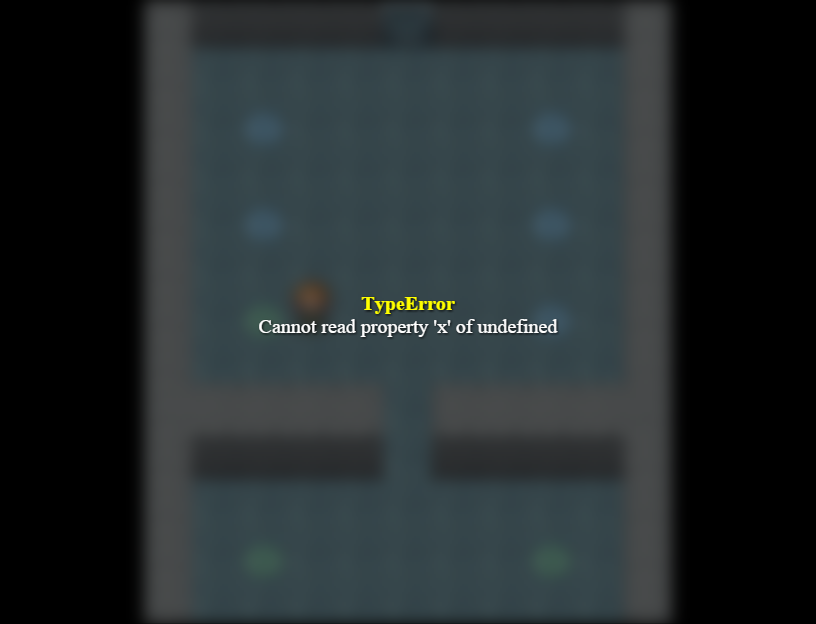 X, huh? You mean that button in the top-right corner?

Although annoying, the technical problems didn’t detract from my liking of the game. It’s worth your attention for the time it asks of you, especially if unique puzzles are your thing. I feel like this could’ve been applied to a full-blown RPG to great effect.

All things considered, I give it a...