0 reviews
Foreword:
I started this game long time ago in the year 2013, but I cancelled it later because I thought it wouldn't fit to the standards of a rpg-maker-game at this time.
But since 2017 I continued developing this game, because I met some people who motivated me continuing it. This game will play in the Doom-universe and will also have elements of the Doom-bible and novels of it - but it is not required reading them before!

Plot:
On the research station Phobos scientists discovered portals to another world, portals to hell. A group of marines were sent to rescue the station and the scientists. Only one marine, Flynn Taggart, managed to stop the invasion and close the portals. After his return to Earth everybody thought humanity was safe. However, later, demons appeared on earth - the same creatures which the marines fought on Phobos.

Another marine, Hudson, will encounter these creatures and has no idea what awaits him. 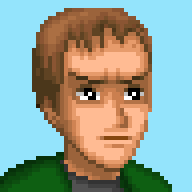 Hudson Anderson
He is the protagonist. He has been a member of the marines for years and fought in Afghanistan and Syria. Even with all of his experience he was not prepared for what happens to Earth. 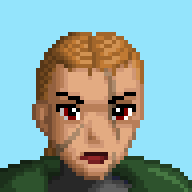 Pandora
No marine, and her name is actually Jaqueline Summer according to her fake identity card, she stole the marine-armor from a dead marine. She grew up on the streets and was a member in a gang but her life changed when the invasion began after her gang was killed. Now she fights for her life, but will she survive? 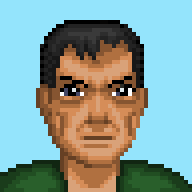 Flynn Taggart
The only survivor on Phobos after beating the invasion and closing the portals. Now he has to encounter the enemies again. He is the expert in knowing the enemy thanks to his experiences on Phobos. 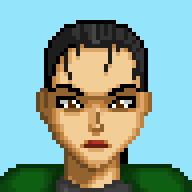 Lorelei Chen
Comrade of Hudson who fought with him in Syria and Afghanistan. She intimidates most people and is talented in boxfighting. If she gets wounded she pushes herself too much forward instead carring about her wounds.

Gameplay:
It is a shooter game, which orientates on the original games Doom 1 and Doom 2. You can shoot and change the weapons with the number-keys. Furthermore you will encounter enemies attacking you from distance or in close combats. And you can choose between four difficult-grades, even nightmare for the really hard ones! And some items will also appear (Berserk, invisibility etc.).
Beside the action-battlesystem you will also get varied boss-fights (for example a boss-fight in a first-person-view).
But I cannot add any feature in the doom-game, for example Monster infighting (monsters will fight each other, if someone shoot at one of themself), that will end in a complicate "code" that would cause buckings because I have to do this for each enemy in the game individual. I'm just glad that I could implement enemies that can shoot at you without problems.

Afterword:
Well I still work on this game - nothing playable at the moment. But I'm happy that the battlesystem works like I wanted, that was a big chapter for me :D Now I can create the levels and some features. That will take its time but I will release at least a demo-version of this game, with the first episode.

Doom is copyright by ID-software, I don't own anything on Doom! This is just a fan-game which is free and I don't want to make profit with it. I hope it is no problem to present a fan-game like this in this forum. 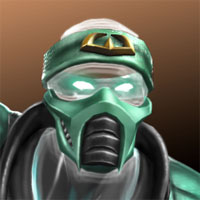 I do my best to release at least a demo of the game this year.
Red-Cube

Close
01/24/2018 01:25 PM
Well I've planned many features for the game, so it takes time to implement them into the game (for example the boss-fights in first-person-engine or some other actions during the game).
And the first demo will also have the first episode which includes 8 levels with story-elements, awesome boss-fights and some secrets you have to discover. And 8 levels per episode (inculding bonus-levels) are planned for the complete game, which makes 24 levels ;)
Red-Cube

Once he and Carmack were best buddies though. I think if you can bring Van Halen together, you might as well succeed with them.
Clades

Close
02/07/2018 09:28 PM
Hm, well we can give it a try.
The goal is persuading him with the story of the game. Look at the game Undertale, it was made very simple with the Game-Maker but it got a huge fanbase just because of its story and the idea of the game!
So maybe we can do it with Doom too (even though I doubt it) :P
Red-Cube

Back to the topic:
Is it possible to slay the demons that brought us "Doom 4" in this game? You know Doom 4 aka "Killmove - the game", right?
Clades

Well like I mentioned it in the description: its gameplay orientates on the old doom-games (Doom 1 and 2), but with a few limitations. I didn't (still) play the new one.
I thought also about making brutal fatalities in the game, the player can do :D But that would take more time and the game won't be finish!
Show
But if the fullversion is released maybe I'll work on a Doom - Brutal Sky, say the brutal version of Infernal Sky :P
Red-Cube

But you could do some nice charset animation for killed enemies. I think it's much more fitting if you want to stick to the original.
Clades

Close
02/09/2018 08:48 AM
That's a good idea... But that would take more time <.<
First let me finish the regular one, then I can consider adding these features. And also I've planned for the fullversion a new individual graphic-style, that should fit to the chipsets (the rtp-chars in the game are ugly as fuck, I made them 5 or 7 years ago and was too comfortable making new ones. You'll see these only in the demo-version).
Red-Cube

Close
02/10/2018 01:02 AM
So you're planing to do a whole episode (I guess that's what featured in the demo) with inferior graphics and inferior game design and once you've done you add up more?
Really dude? Really?
Clades

Close
02/12/2018 03:52 PM
The brutal version is just an option.
But for the fullversion I'll definitely make better graphic sprites, so that would fit to the rest.
And keep in mind, the demo-version is just a demonstration ;)
Red-Cube

Speaking of, why don't you do a remake with the MV and sell the Pre-Alpha state as Early rip-off? :D
Clades

For the last one: I guess ID-Software will be happy as fuck when I use their franchise for making money lol
Red-Cube

author=ClAids
Na, even for an Alpha-version it is too unfinished for it :P


Dude, you still didn't get the concept of early access, did you?

author=Clayfighter
For the last one: I guess ID-Software will be happy as fuck when I use their franchise for making money lol


Well you have to rename it then. Call it "Boom" or whatever. I'm sure nobody will know.^^
Clades

author=Pink-Cube
Dude, you still didn't get the concept of early access, did you?


Sure, but it bound the player for at least an hour or two hours, not for fifteen minutes^^

author=Rattle-Cube
Well you have to rename it then. Call it "Boom" or whatever. I'm sure nobody will know.^^


That's the idea, lol. Then I have to change the name of the enemies for example ArschWeih, Baron of Heaven, Femancubus etc. :D
Pages: first 12 next last