Intro
The Duelist Master is a Yu-Gi-Oh! inspired visual novel game sets in Duelcity where a tournament to be the duelist master begins. There are 24 episodes plus one episode about the character introductions in total and you can watch it in any order you want (although it's best to read it from top to bottom in order to understand the story).

Music
The background music makes me excited; i like them especially the one being played in the last battle. I also like the sfx that is used when the LP is being reduced since it reminds me of Yu-Gi-Oh!.

Graphics
The game's mapping are decent. The only strange thing that i find is that Brice's room in the tournament that looks very big. I also like how the card sprites are being made to make it look similar to the card.

Story
Since this is a visual novel game, you'll mostly just "watching" people duel. However, although the story is the main selling point of the game, there are so many cropped texts and grammatical mistakes. I find it hard to follow the story in the first few episodes because of that since it gave me a headache. 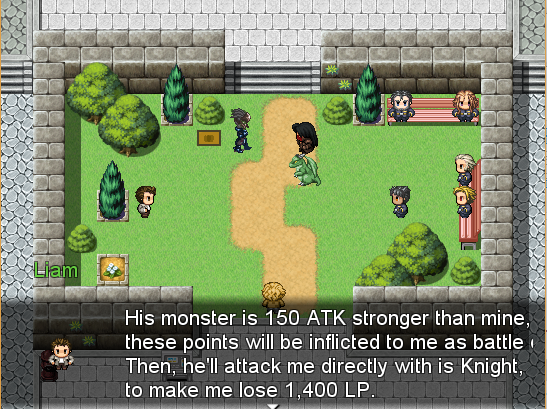 
As for the story itself, it is quite decent. I can't really sympathize myself with the main characters; in fact, i find it hard to remember the character's names. Sometimes, the duels are also using forbidden cards and limited cards that is more than allowed (2 monster reborns in one turn? Really?) even though the tournament should be following the rules for not using it. Well, other than that, i have no problems with the story and i don't really think those two points alone ruin the whole game. It's still enjoyable for me and there are also some scenes that i find it funny (such as the ending of Brian's battle in Castlenge).

The game
As i said before, the game is a visual novel game so you should expect to not getting anything order than reading a story. You can select the episodes that you want to play in any order that you want so you can just "watch" an episode and come back later to continue the story. The only thing that bothers me is that you can't return to the episode selection once you select an episode so you have to restart the game if you want to do that. The episode selection also automatically returns to the first episode after you "watch" an episode instead of selecting your previously selected episode.

The game also offers "Connaisseur Mode" to skip the rule explanation and give you a question that will give you a password to the bonus content when you start the game. I didn't activate it at first in order to get explanation of the terms that i don't understand since i only know the term until synchro summon (i have no idea about both XYZ and pendulum summon so i was hoping to get an explanation), but i still have no idea what it means after i read the explanation in the first episode. In the end, i ended up restarting the game and activated the Connaisseur Mode just for the bonus content. However, the questions are mostly related to Yu-Gi-Oh! anime, and the later arcs at that so if you haven't watch it like me, you have to resort to google for the answer. 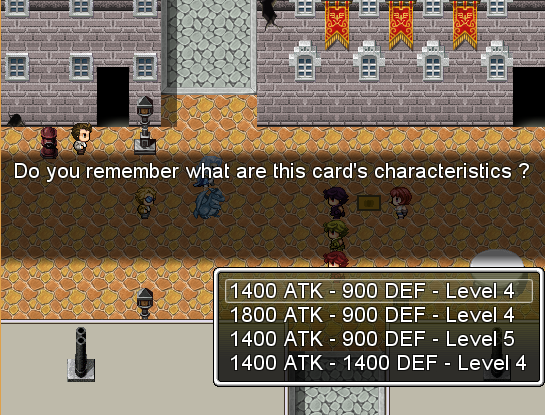 
Since this game is about Yu-Gi-Oh! duels, there will be a scene where the people are dueling against each other. However, in the duel, it is hard to keep track of the monster's attack and defense since the attack and defense are only displayed once right after the monster is summoned. I also think it might be better if i can see the card that the players are using in order to understand the effects.

Pros:
- 24+1 episodes.
- You can "watch" in any order that you want.
- Episode recap (if the duel is not finished in the previous episode).

Cons:
- You can't exit the episode once you select it.
- Lots of cropped texts.
- Unclear explanation.

Conclusion
This is a visual novel game about Yu-Gi-Oh! which might interest you if you're into Yu-Gi-Oh!. Close
06/10/2019 07:56 PM
Honestly, I didn't expect to get a review on this because it's a very original "game". Furthermore, you liked it and you gave a nice score.
That's a nice way to support me to keep working on that kind of game.

Actually, I'm working on a sequel (not very much now, I'm focusing on Sorcelleria and the event Abrupt Ending Party). The Duelist Master 2 is inspired from another anime arc: 5D's (I think you know what I'm talking about). A darkest atmosphere and a main character struggling in the sewers with his friends.
A screenshot, maybe? Though the characters are XP-style, the game's still made on VX Ace.
aquatorrent
4291

Close
06/15/2019 02:51 AM
to be honest i didn't think that i'll enjoy the game at the first sight, but i went at it anyway and i enjoyed it. well, i don't know that much about the series after gx (i followed the manga but i couldn't find any after gx so i gave up) so i'm not sure if i understand what you meant. the screenshot looks way better than the previous game though. keep it up!
Pages: 1