A great prologue or a nice short story...

Vega Legacy is a short sci-fi game set on a mysterious planet: Tayla, the protagonist, escapes with a pod from a damaged spaceships and lands on this unknow planet. The adventure starts from here, it is good and entertaining, not too long and addresses both the protagonist identity and the story of the planet.

Gameplay
The game itself can be divided in three mainly different parts:

Dialogues is self explanatory: these are the typical cutscenes in which you have just to read a lot and you cannot interact at all. Yep, totally linear and no choices, but this is rather common in rmk games. Many cutscenes features some npcs in order to explain what is happening/what was happened where the main character is not present. So sit an relax since they are well done and I also found to typos, if I remember correctly.

Exploration are the sections in which you have to find something, for example a shelter (in the beginning) or someone you have to talk to. Wander the map and find your objective, and do not worry if you stray from the path as the game will tell you that you are going in the wrong direction. In the base part it was a bit harder UNTIL I found the terminal with the useful map of the two floors.

Combat. Yes, despite the fact that there is no party, since we play as a single character, Tayla, combat is present and it's in real time! Combat is really easy as our character attacks spinning around, so it doesn't matter the direction you are facing AND how many enemies are nearby, as you will attack everyone! This is very basic as there are no experience points to be earned or healing items to be found, but these sections aren't that long or difficult at all. 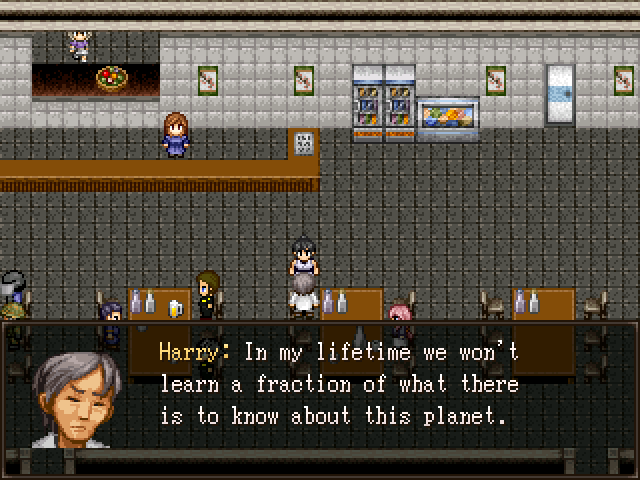 Always remember that if a character has a portrait AND a name, it will be important!

Vega Legacy is a short story but there's a lot to read (optionally too)! I know that this is just one episode, but it works well at a single short story, even if the end leaves a lot of questions, but even if ending "in media res" it's still a pleasant adventure.

Graphics & mapping
Graphically the game use various chipsets from various sources but also some original art and for the most part it's coherent (even if some charsets looks better and more detailed than others). I found mapping to be just ok in the outdoor areas (but not bad) and very good for the interiors. I also appreciated the use of drawn cutscenes that illustrate the most significative and dramatic moments.
Speaking about sounds they found them but be ok, but I loved the music used in the base even if I do not recognize the source.

Any problem?
Ok, so any bad things?
Well the game is well made and detailed, there are some minor imperfections, like the use of a vehicle that levels a bit out of place compared to the scenery (both due to the perspective and style). Then there are some "missing" events: for example you have to fight the monster by yourself with your club in the second part, and then you discover that you have a soldier with you. Or for example when you try to use the inaccessible stairs in the base there is no mention of the impossibility to use them. Ok, well nothing much and only minor issues. I also won't mention other things that probably would make sense of there was another episode after this one.
A final thing is that during the last part there is a gory scene, that while being just on the "pixelated level" was really sudden and unexpected (it reminded to me "E.Eve return the heaven" and "D.Doomsday Door, two japanese sci-fi rmk games that have more scenes of this kind, and they too make use of custom cutscenes).

Conclusion
Vega Legacy is an interesting game, not the usual action sci-fi with the classical two warring factions, but a quite deep short story. Did I like it? Yes! It's not boring or frustrating, instead it's rather easy and you always know what you have to do and where you have to go. Also, no problems or errors with maps, dialogues or game breaking bugs.
I just wish there was a sequel or a second part, just to reach some kind of conclusion. 3.5!

Close
11/03/2019 03:04 PM
Thank you very much! When I get the chance I'd like to improve the combat system and give leveling and max health boosts.

Also, I do need to correct you. Except for the vehicle graphic and the pixellated cutscene images, the game exclusively uses White Screw Store graphics. All characters and tiles are White Screw, as is the window skin.
TheRpgmakerAddict

author=pianotm
Also, I do need to correct you. Except for the vehicle graphic and the pixellated cutscene images, the game exclusively uses White Screw Store graphics. All characters and tiles are White Screw, as is the window skin.

Really? For example the little guy in black on the left side the screenshot seems a bit different from the White Screw Store style. Because I have seen some (very) little style difference between the guards like that guy and the other charsets (they are also a bit shorter). Hm weird. :)
pianotm

Close
11/03/2019 04:19 PM
I mean, I think I changed some shirt colors to create uniforms, but I thought I'd just done straight color changes.
TheRpgmakerAddict

author=pianotm
I mean, I think I changed some shirt colors to create uniforms, but I thought I'd just done straight color changes.

I checked the files, and you're right of course! :) My mistake! Anyway nice choice of resource, I liked them, and nice game too!
Pages: 1