Shooty (AND the Catfish this time!)

It's been many a month since visitorsdreams released a small demo for Shooty and the Catfish, a Gameboy-stylized RPG with his signature quirky charm and lovable character design. It was an earnest attempt to transition into a combat-focused game following the success of the cinematic Flatwoods, and while its heart was in the right place, there was quite a bit of room for improvement.

Now, many months later, Shooty and the Catfish is back with so many improvements that it's hard to believe they are even the same game!

Shooty and the Catfish: Episode 1 is the first part of the adventures of the titular guns for hire. While the characters and their personalities remain mostly intact from the old demo, the story has been completely overhauled into a new scenario that explores a village overrun with a zombifying fungus. With the new story comes a markedly improved script: Shooty and Zaat the catfish are noticeably more fleshed out than they were in their previous iteration, relying much less on edginess and more on wisecracks and tongue-in-cheek humor that made me chuckle on more than one occasion. 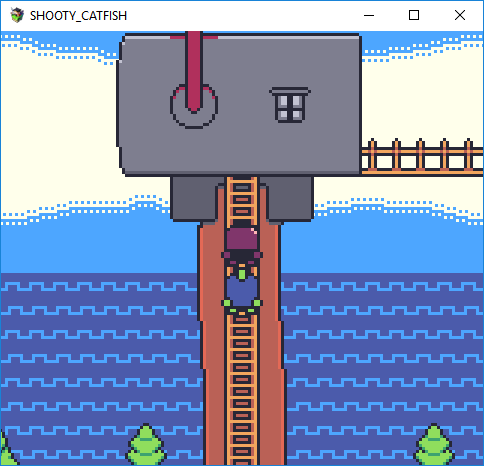 The game's visuals have also been overhauled, now sporting a more "Late Era Gameboy Color" that reminds me of many of the great GBC RPGs that we all enjoyed in the final days of the system's life and the new look adds a surprising amount of personality to Shooty's world. Mostly everything is clear and crisp and works out for the better.

I say "mostly" because there were a few quirks, most notably that the UI adheres perhaps a bit too closely to the limitations it seeks to emulate. Particularly, while damage popups are present when attacking monsters in battle, no such numbers are to be found for your own party members. Your current HP is never displayed in battle either, save for the HP bar, so just how much HP you have is a bit of a crapshoot. A few menu errors, just as some text pushed way off to the side but still barely visible in the status menu, are a little irksome but are not much of a problem otherwise.

Though it would be helpful since there have also been a few improvements to the game's combat system. Zaat the catfish now comes along for the ride as a second party member, and can unleash powerful attacks for finitely-available currency. Shooty himself retains the ammo system present in the demo, but thankfully his moveset has been rebalanced so that the gun play abilities don't render his regular attacks useless.

Since encounters are still finite, rationing both characters' consumables as not to run out is imperative. Encounters are also less frequent that they were previously, with more enemy variety and some of the most charming monster designs that I've seen in ages. If there's one thing Shooty and the Catfish excels at, it is certainly characterization and charm. Though I do hope future episodes will add even more depth and strategy for battles when I'm fighting these hilarious monsters: there are no elements or weaknesses to exploit or status effects to speak of, and encounters don't amount to much more than "deal damage and heal occasionally." For a short episode like this, it's far from a deal breaker. 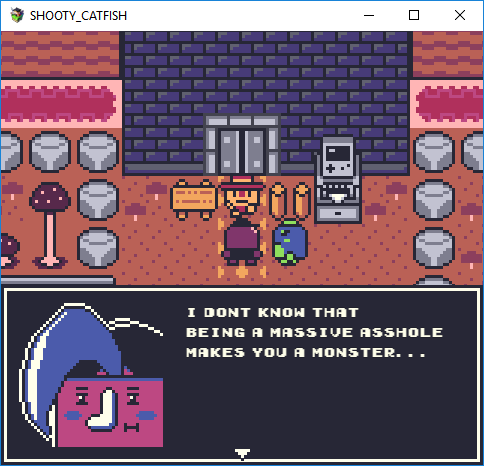 But despite its gameplay flaws, Shooty is a remarkably charming experience with wit and ridiculousness that will make players smile.
Episode 1 is a massive improvement to its foundation and I'm excited to see more of it.

If you've got an hour to burn, you certainly can't go wrong here.

I will admit the UI is still not where I would like it to be, theres certain information that MV just does not want to show running at such a low resolution. It was never meant to run the way I have forced it too and all the things you can see came about through a lot of jerry rigging. Hopefully someday I can sort these issues out (you would think shrinking the font would help but nope...), if not for this series than for whatever I follow it up with.

As for complexity, each episode will add a new firearm to Shootys skill set and they will have buffs/debuffs. I dont have plans for status effects but things like stunning an enemy or risking getting a 1 hit KO but with a 25/75 chance of missing, stuff like that will become a part of it. The last episode is also mapped out about the size of 3 dungeons combined so itll all come together in the final episode (hopefully).

Ive always been someone who would rather play something that has average gameplay but is interesting for all its other aspects than something that plays great but has no personally and I think thats always going to be reflected in whatever games I make because the gameplay is the least interesting part on my end development side. Maybe one day I will find a healthy balance, but probably not, ha ha.

Thanks for taking the time to write this up. Your a legend!
zDS

Nah! I need to get around to playing this too!
visitorsfromdreams

author=zDS
APRIL FOOLS, it's a scathing review after all

Nah! I need to get around to playing this too!

It was April 2nd when it came out for me so in your face!
InfectionFiles