Do You Want To Quit

Name: Do You Want to Quit

Story: You play a young woman who doesn't want to leave the house. Your mother convinces you to come and join her at a campout. She basically coaxes you to travel through a forest full of deadly obstacles. Mother of the year! 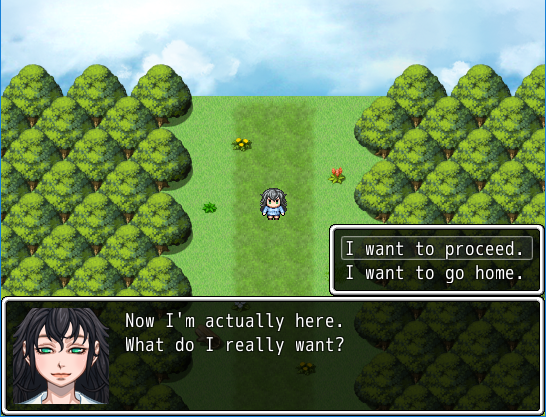 If I were her, I'd really want a comb. And coffee.


Gameplay: The game is incredibly short and is quite simplistic, given the subject matter. I feel like being able to make the important decision to go forward and continuing or ending the game on a button press undermines what the game is trying to tell us. It lacks the tension and uncertainty that one would expect you to generally try to build, to demonstrate to the player what that feeling can be like. The puzzles that result in certain death if you fail is a nice metaphor for the fear inherent in trying to leave the safety of one's home. There's really nothing more to say about the game. So far, I think the review, at this point, is actually longer than the game.

Graphics: Using the RTP character generator, the developer has somehow, someway, managed to make the most bedraggled looking, exhausted-looking, scruffy looking, barely conscious character in the history of RTP characters, and somehow, it's just amazingly appropriate.

Sound: Wholely RTP sound effects, and the music, I don't think the main music was RTP, but I didn't pay close enough attention to it to be certain. That's not a bad thing.

Conclusion: There's not really much here. It's a simple, first game that has likely taught the dev some important basic mechanics for RPG Maker VX Ace. There's nothing wrong with it, and it simply is what it is; average, short, and with a message that's hampered by the limitations of basic gameplay. Nothing more, nothing less. We're lucky if our first games were something this well constructed and functional.