Hello everyone! Welcome to my review for Sacred Earth: Desire by Skie Fortress! This game is supposed to be a sequel from a previous Sacred Earth title, which is still in its demo phase. This game is a very cool hybrid between a Visual Novel and an RPG! The aesthetics are top-notch!

I was already pleased seeing the game's way of presenting itself like a true Visual Novel, featuring some cool character artworks as well as some wonderful backgrounds for it, while the characters talk to progress the story. Very alluring and I simply loved it.

You play as two siblings Gunnar and Veili who are parts of the Vanguard. The two are sent on a mission,along with an S ranked Vanguard to help a girl with her research. Now, I am not really sure what happened before this game, all I know is that there was some kind of grand incident that changed the course of their lives now as we know it. The game has a deep and interesting lore that keeps you intrigued as you try to uncover the mysteries that the two siblings are facing. The characters and their interactions are fun and entertaining, especially with how they are presented in the game. Reminds me so much of the classic Tales series. I just loved it.

The battles are pretty neat! It's a side-view battle system that has combo aspects to it as well! Attack is substituted by Chain, which allows you to do a combo chain attack with the character's weapon. A very cool twist to the usual JRPG turn based battle system. I really like that! I also love the idea of using Master Quartz to determine the skills that a character learns, pretty sweet concept. The balancing is decent enough, but there was one monster in the ruins that completely wiped out the party with its flame attack. XD 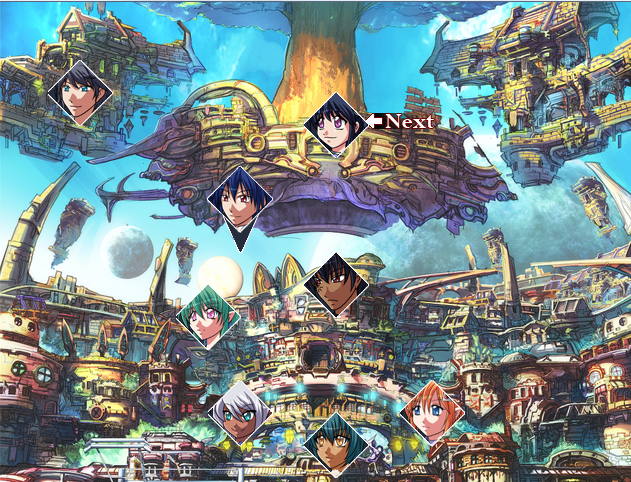 I love how the world map and level exploring is given this twist. Makes for an interesting interactions with different characters at different places.

The game has tons of cool custom artworks and sprites, so kudos to the dev for that!! I can really see the effort and love put into making every bit of artwork in this game. I really really love the animated battler sprites and the animations that they do with their action sequences. The tilesets are superb, really gives the classic RPG feel to it. Again, the Visual Novel aspects of the game didn't fail to deliver the perfect aesthetics for character and background arts. :) The aesthetic is a beautiful anime, old school RPG-esque, that I really really adored.

Music is amazing! So much JRPG goodness to them, like I'm playing one of the PS1/GBA RPG legends or something. Really cool stuff!

It is a very well put together Visual Novel/RPG hybrid game that will not fail to amaze you with its custom assets and artworks! They're very lovely to look at, and the characters are really fun! I'd rate this game a 5/5 if it is a full version. ;)

Close
04/21/2018 02:39 PM
Thank you for the review! I wasn't really expecting anyone to play it given my relative lack of presence around here, but I was pleasantly surprised. I'm glad you enjoyed it.
Starmage