A different kind of Rpg - a semi-review

First thing: the title is awesome!
Ok, let's be more serious:
I call this a semi-review since I've still to finish the game so maybe I'll change my idea, but this needed a review, as this is a game that deserve to be played.

This game is different from most Rpgmaker games I found for various reasons:
first he puts almost immediately into the action with little backstory... and then explains it "with the dropper"!
Second, in this game the exploration is bi-dimensional, a bit like The Spirit Engine games, for those who played them. It's an interesting concept that I've never seen being used in all the Rpgmaker games I played before. So you can move in two directions only except from when you have some forks. Same goes for combat: exactly as what happened in the Spirit Engine, you move until you trigger combat, then you've to win, as you can't avoid the fixed encounters. 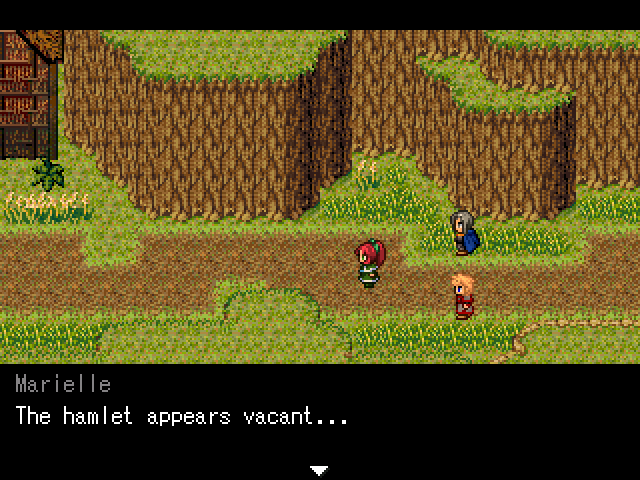 Charsets are mainly edits, but they are well done, colorful and well animated, I liked them even if they are a bit generic (and the are no facesets). I mean, this is a classical low fantasy setting, nothing weird or bizarre (there are even rifles!), so that's ok, even if the chipsets are the usual ones I've seen soooo many times. The final result is simple but effective.
Story is nice, really different from your usual Jrpg and told through nicely animated sequences. I like the serious tone and enviroment, also music is a nice selection.

BUT I like even more the combat system, really stategic: you need to earn some points to be able to use certain abilities and moves and this mean planning. Here you can't just chug your MP potions to unleash the most powerful moves, not at all, you've to use
strategy and learn to use each character ability. Also different enemies require different strategies, and, most importantly, you do not level up BUT you spend experience points on skills that have to be unlocked and equipped. And of course you cannot equip them all but you have to choose and change depending on your strategy to create a sinergy among the party members. Also please mind that experience points are shared so you have to plan the advancement, but this system is in my opinion classy and well done! 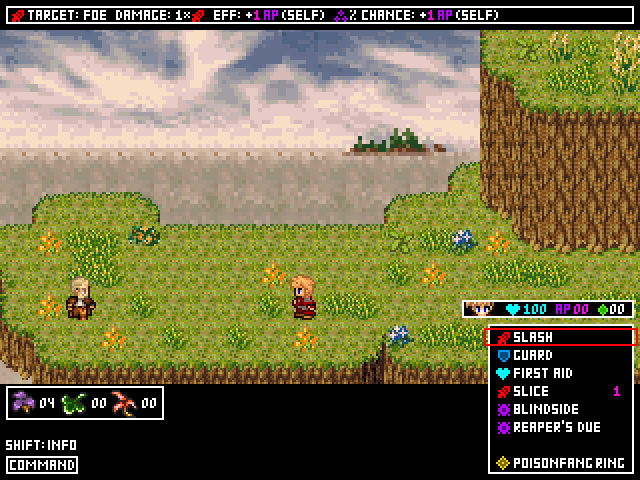 Difficulty is ok, quite Hard but fair, I mean that I cannot spare the healing resources, but at the same time they were sufficient to progress. But yes, this isn't an easy game in my opinion, here combat is really dangerous and not just a filler or a walk in a park.
And for example one of this problem is that you have just one save that is replaced every time you save! Well, this is not a casual game in my opinion, or maybe I'm not really good at it.

There are also some optional quests that may be done for extra gold and experience. Oh it's worth nothing that while you find and buy trinkets that give you abilities like for example poison immunity, the focus on the character's growth and abilities, not on its equipment.

The only flaws I saw in this game are some spelling errors ("immediatelly" said by Orben, and another word on the dialogue with the Elder, but I can't remember), the lack of shops where you can sell items, but no bugs or other problems, anyway as I wrote before I've still to finish it. So far so good!

Besides the combat system, that I found really well done and interesting, I also must stress the beauty of the little animations: characters act, move and express themselves in detail. It's a beautiful little world that comes to life, and also a great story told through several scenes. My only complain is the one-save-slot and the difficulty, but this second issue is maybe due to my lack of skills on the strategy department. That's why I'm going to play it MORE!

author=Deckiller
I found the difficulty to be just right, but I may or may not be a masochist. (It's fine.)

Hey I know I've to "git gud"...I suck at strategy games anyway I see on the comments on the page that I'm not the only one.
It's ok, it is not frustrating at all, but you surely can't expect that combat is a walk in a park like on other games where you one-shot weaker enemies.

Aaaand I found your games to be easier than this, but maybe that's me of course! ;)
Pages: 1