NB: This review is for the badadaptation version of Celestial Descent, there are other versions available on the download tab.

Celestial Descent was a game entered into the RMN 5th birthday event, the theme of which was Badaptations. The idea was to make a bad video game adaptation of a TV show, film, song, comic, book or any other medium, though not of another video game, within a 5 hour period. VideoWizard submitted Celestial Descent but he thoughtfully retitled the game so that you would have no doubt whatsoever that the game you were playing was intended for the event. 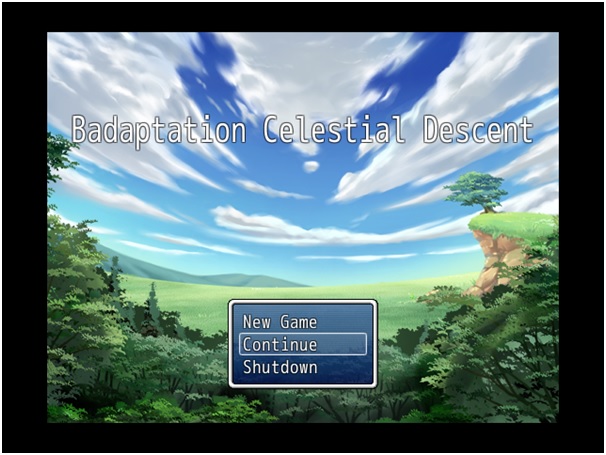 Well I'm in the right place then.

Unfortunately that is the only thoughtful thing about this game, and I use the term game with reservations, since whilst it does have some of the building blocks that we associate with an RPG game such as a main character, a couple of maps and battles it doesn't actually have anything made out of them.

What it does have is encounters on every square of the blessedly very small world map, and for that I blame tardis in no small degree. If you check out the world map screenshot on the gamepage (none of which are actually in this rendition other than a version of that map) you'll see the reason why. The developer decided to take up the challenge that was laid down there and then subject the poor dopes who downloaded it to the tedious experience of fighting exactly two slimes every step. Still you persevere, because in the near distance you can see a village and surely there will be a reason for all of this and perhaps a clue as to what this is supposed to be a badadaptation of precisely.

It's a forlorn hope

The village when you finally reach it is populated by a single armoured individual who has made it snow for no reason that I can fathom other than he likes snow, but then I can't fathom the rest of this offering so I suppose I shouldn't be surprised, a woman who is complaining about the snow and six more slimes, which chase you. 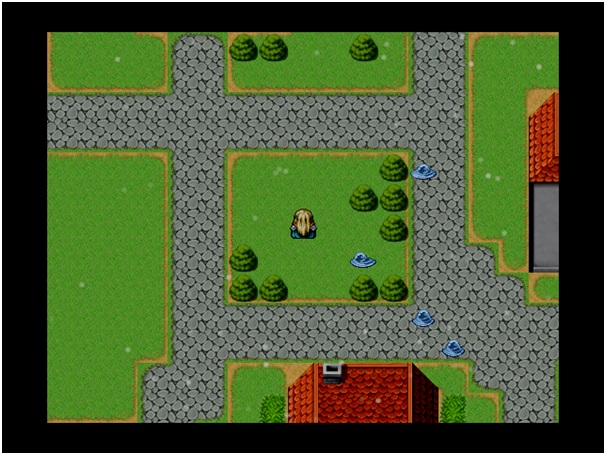 You can't even take a peaceful walk in the park these days.

If they catch you rather than entering into yet another battle against slimes they transport you back to the start of the world map so you'd have to fight every single step again to get back to the village. Luckily for my patience the slimes in the village whilst relentless are slow, so by the time I let them catch me to see if that would progress something I knew there was nothing in the town to interact with so I could just exit out and be done with it.

Having read the gamepage I believe VideoWizard's idea was to make a badadaptation of his own game, since it apparently got less than a stellar response from the community when it was released. I suppose that is one way with dealing with criticism, but it's not a very effective one, and also since it contravenes the rules of the contest pretty much disqualifies itself from the event.

Go spend your time on something else, this isn't worth it.