Basic Rundown
Konazi Island is the story of a young ugly kid and his journey to take down a militant band of fish-like humanoids known as The Gold Team, encountering many rivals and few friends along the way.
You live on a secluded island, far from civilized land, with a handful of rejects like yourself to call your neighbors and family. One day, however, the lifestyle of being the town errand boy meets an abrupt end as an expedition up a mountain leads you to encounter the new kids in town, The Gold Team, and they're after some simple-minded livestock. These guys mean business, and you'll go from a world of carefree fun to a world of hurt the second you try messing with them; but with innocent lives on the line and a mystery to get to the bottom of, you're not left with much choice.
Will you prove victorious, or crumble under the pressure?

Notable Inspirations:
-OFF and HOME (The large focus on puzzles and the protagonist wielding a baseball bat)
-LISA the Painful RPG (The choices that mean something as well as affect game play instead of just story)
-Earthbound/Mother 3 (The art style)
-Wadanohara and the Great Blue Sea (The ocean setting... not much else, though)
-Spongebob Squarepants (see above) (also a few jokes too)
-Jak II for the tone and inspiration for the protagonist's lingo

The full demo will feature:
-The first 3 chapters and first act of the game (this one only covers the 1st one)
-An length of roughly 10-15 hours (this one is about 3)
-A taste of what will come later <3

The full game will feature:
-9 chapters split into 3 acts.
-An estimated length of roughly 40-50 hours.
-Difficult battles that test your ability to consider your actions and deal with rough situations.
-Overworld battles (that don't just take you into a battle screen).
-Puzzles that make you think and use the world around you to your advantage.
-Pretty much no teammates with a few minor exceptions here and there.
-An interesting and dynamic story with twists and elements that cause you to question how much hatred can do to you.

Ambition and More on the Remake

Yo yo yo, you know the deal. Matthew here dropping some mad updates on this game, yet again!

I'm only really putting these here as not many people are gonna check up on the blog, so this should be showing up on the main page for everyone to see!

As you all know, the Chapter 1 demo is out and being constantly updated (do be sure to download from here, and not GameJolt as this version is updated live). In the near future you should expect to see the addition of Chapter 1.5 and maybe even Chapter 2? Of course, though. I don't want to spend too long on it, as I should go into more depth about the future of the game.

As you all can surely tell by playing it, Konazi Island is not a traditional RPG. It has many... unique elements in the overworld and a bit more going on than one of these usually has. This is all because Konazi Island is an ambitious first project, we both have a lot planned for it and we plan to deliver, even if it does kinda take us a while. And a while it certainly took. This project begun all the way back in July of 2016, and in that time it has made rapid, slow, rapid, slow progress. Why is this? To be perfectly honest, the project is a bit too ambitious for our own good, and we're pushing RPG Maker 2003 to its limits here (hence why the game is like 300 MB). To be honest, it's getting pretty friggin' tiring, it has for most of its development time honestly.
A lot of it boils down to one thing: 2003 lacks any form of script support outside of dynRPG (which I'm not using, as I value animated pictures and the other options newer versions of 2003 allow over script support) and not much room for the more complicated questions. Honestly, it's taken quite a toll.


Due to all of this, we've decided to remake the whole game up to this point in RPG Maker VX Ace. 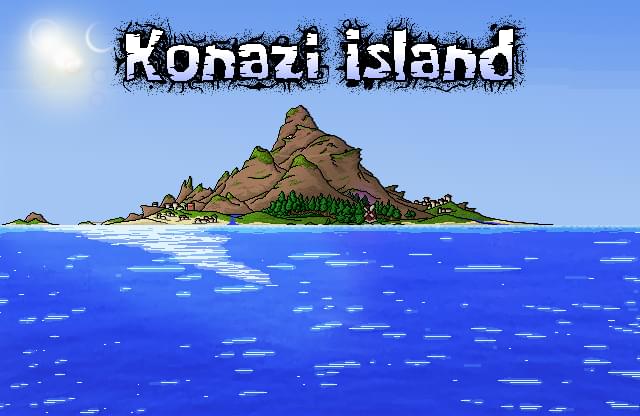 This is the updated title screen graphic of the game, and more updated sprites can be seen in the Discord server.

Honestly, we're just remaking it at this point so that our stupid ambition doesn't cause us to release the game 8 years from now (it would honestly be faster to remake the entirety of Act 1 than to continue from where we are now).
Worst part is, even with what we've managed to pull off in 2003, it can still
end up feeling choppy and not translate perfectly to the grid-based movement required.

At this point, all we care about is making the best game possible. The "wow" factor of being able to pull off cool things without the use of scripts isn't worth a potentially shoddy product.