All aboard the Midnight Train!

Midnight Train is a game divided into four parts (or chapters) that... uh well, if I had to define this game I'd call it an adventure of mystery and puzzles: this time out alter ego is Luna, a mute girl that is travelling on a train. After a short prologue she notices that the train has stopped in the middle of nowhere (in the sense that it is all dark!) and everyone disappeared except for a wannabe detective named Neil (that was asleep so he did not notice anything!). Exploring the surroundings they enter an abandoned building hoping to find an exit: here there are two gift boxes addressed to them, each one contains a pocket watch and a message that tells them that they have a limited time to reach the next train before it leaves the station. This is just the beginning of a mysterious adventure for the determined Luna and the weak but clever Neil, a journey where they will have to use all their wits and skills to survive the deadly traps and solve various puzzles created by some mysterious suprenatural entity or organization (I won't spoil but mind that this is a game of mystery and fantasy in a sort of victorian setting)...

Ok first thing, do not worry! I feared that the game was timed but from what I understand this time limit is just a narrative detail, you can take your time to finish the game that is divided into four separated chapters lasting more that one hour each (ok I partially lied since there ARE some timed sections/puzzles, but I found the quantity of time available pretty reasonable to complete the tasks without much hassle). 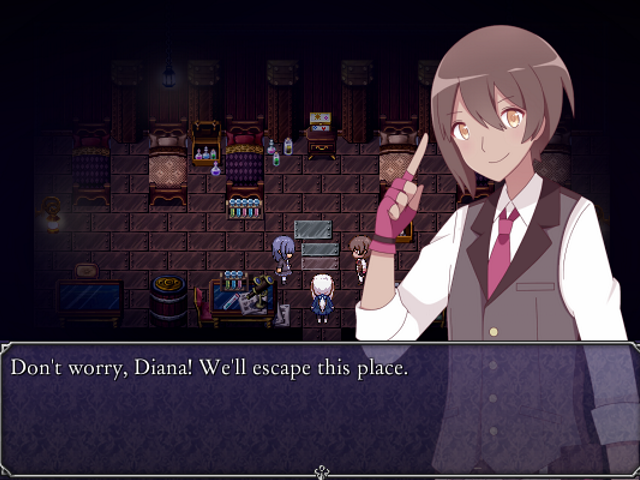 As mentioned before the game is about puzzles, and I admit I found most of them pretty easy (the solution was often more logical and simple than what I expected!), normally you just have to explore the surroundings to find a solution or some clear hints that explain what you are supposed to do (even if there are places where you have to use your head for example
Show
in one area the code number used to unlock a blocked door is written upside down, but you have to learn this by yourself!
).

In most cases the game requires to examine various spots, collect items and then using them from the inventory after you move to the right spot (es: take a key from the floor, move to the door, open the menu and activate the key to unlock the door). Then there are some crates and lever puzzles, but I guess that every player can easily figure out what he has to do, anyway there is the option to ask for hints (ok... but I admit I never used this feature, sorry!)

But wait there is more! The game also includes some simple action and stealth sections where the player must be quick to react, jumping moving spikes, avoiding debris or creatures (and in some cases even intercepting them to defend a hapless character... uh Neil!), shooting and so on, all in real time of course. Normally here making a mistake means instant game over, but the game saves just before these dangerous sections.
In other cases you can save your game using one of the many blue boxes scattered around the abandoned complex, but do not underestimate the traps, because in some places a game over awaits who carelessy interacts with everything (eh, I learned this lesson the hard way!). 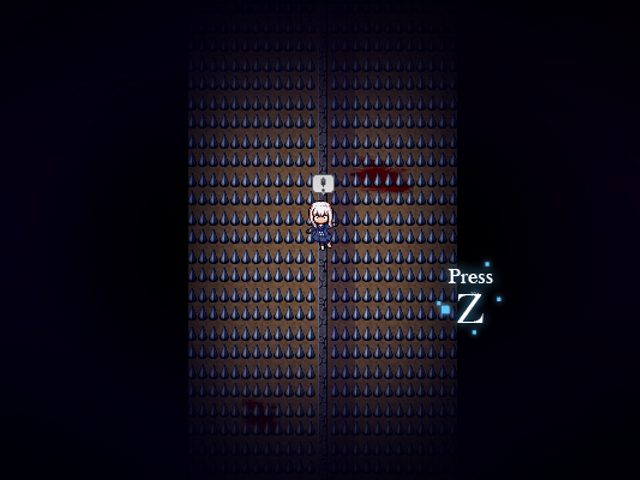 Luna is walking on a thin ledge! Let's press Z or it will be instant game over!!!

Oh and let's not forget the parts in which you have to follow Neil's deductions by choosing the correct topic! Here you must have followed the adventure in order to give the correct answer. Nothing difficult, but another activity that makes this game a really varied experience (despite the total absence of combat and other more typical rpg features like inventory management. But ok, this is clearly an adventure geme, despite being made in rpgmaker!)

But Luna and Neil aren't the only ones lost in this weird location, they will meet other characters that seems to be lost like them, for example Diana, Selene and Apollo, but the real question is: can they be trusted at all? As you can probably expect during this adventure we will learn their stories, including Luna and Neil's past that are clearly linked to the mysterious adventure they are living.

Visually the game is pretty good: the enviroments are for the most part boring, but these are dungeons with enigmas, so you can't expect to visit beautiful landscape, in any case each chapter has a sort of different "theme" even if it's just slightly different. But it's ok, this is a prison and we have to escape. There is no time to waste, so everything that can be interacted with is usually linked to a puzzle, so there is no risk to be confused or diverted by the main objective.
But if the enviroments aren't very different (though they establish an interesting victorian/steampunk fictional world in which the story is set) they are well done and I found no bugs or problems. Then, speaking about graphics, there are several pictures that illustratesthe most intense and dramatic situations, they are really pretty and detailed, as are the characters' busts and charsets. I liked the visual style of this game, it's coherent and distinctive. 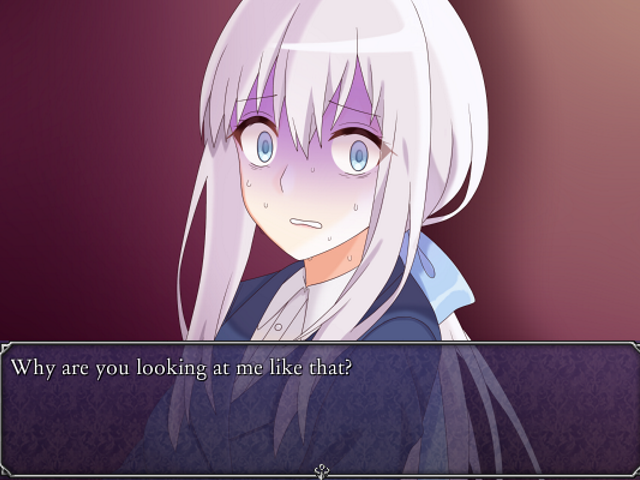 Luna? Don't worry, I liked this game, so you should not fear my...

... final verdict!
The Midnight Train is a fun and well balanced game for pretty much everyone that likes adventures and puzzles. Uhm the most difficult parts were probably the timed ones, especially the ones with the deadly spikes that will make you regret every mistake! But difficulty is about average from the beginning to the end, and I liked this because I could concentrate on the story without losing too much time and patience on puzzles. What? Oh yeah the story is good, I'm glad that you asked, there are various twists that I am sure not everyone will expect, also the cast is small but interesting and well written.

This is not a horror game but there is violence and some gruesome deaths (well at least on the pixelated level, nothing extreme at all!) if you choose badly (I know I am saying this again, but watch where you walk... I did not expect some traps at all!). Yes, despite the cute look of the characters there are some strong themes, anyway it's a well written autoconclusive story with extremely well designed puzzles. Oh and the game is long about 9-10 hours (more or less. I had to add up the time listed on the last saves of each chapter since these are stand-alone, so I may be a bit wrong! But not too much!).

So what? 4,5/5 is not a rating I give easily! But I had a lot of fun, I solved each puzzle and tasks they threw at me, and I also felt really clever doing that!
All aboard the Midnight Train, now!