Road To Paradise - The Staircase

Life Is Full Of Disappointments (so what's another one?)

So, this project has been around for a while and unfortunately while I appreciate the subscribers and downloads that it's gotten, they aren't ANYWHERE NEAR the amount I was looking for to indicate a level of interest that justified continuing this project as a commercial game. The other half did much better than this half (wish I knew why), but it still did not have enough interest to justify continuing commercially. And I stand by my resolution that this would be continued commercially, or not at all.

So: I am putting this game project on Hiatus as soon as I'm done with this post. A friend told me that (I'm paraphrasing) nothing is ever gained by cancelling something or deleting it, because leaving yourself the option to go back and pick up a project years later has no downsides, so that is why Road To Paradise will be on Hiatus, not Cancelled.

Please understand how much I appreciate the comments, feedback, and reviews that I've gotten. I am very grateful to everyone who played this, especially if they found the time to tell me what they thought.

Sorry to any of you who were still interested in/anticipating this project. I have at least one or two projects that I'm at least several months remiss in uploading game pages for: hopefully one of those will grab your attention like it did mine.

This Also Needs A Review 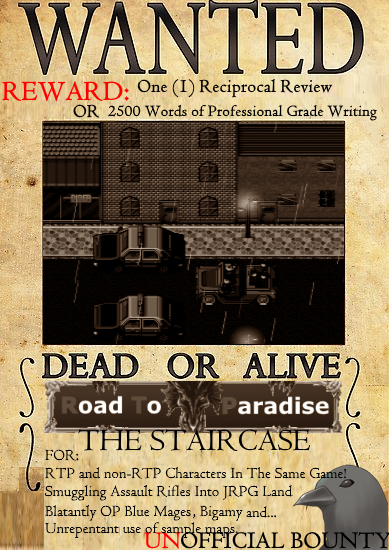 Even if it's not a good review, I feel like even an average review would help a lot to dredge this up from obscurity. We've got the review bounty thing going on (and I'd be reviewing games myself if I could find the time, I really would), but if a bounty isn't posted for this by the Review Pirates, I can offer my own bounty. I can't award maker score, but I might have even better things to offer as incentive.

So, how bout 'it, anyone want to hook a crow up?

It's out! The Staircase is finally out you guys!

I sincerely and dearly hope this launch will go more smoothly than that of The Staircase's sister game (which is a pretty damn low bar).

Road to Paradise: The Staircase - Episode I: Downstairs done officially got released. As of now. Please play it when you get a chance. Everyone, like every single person. I made this thing. It was hard. No one paid me. I made it for you to enjoy so enjoy it. Hopefully you will all enjoy it very much. The word of the day is enjoy.

Release Notes
* Up until the last minute there was a known bug with potion identification: enemies on the fifth floor always drop un-ID'd potions. Well, I sort-of patched it. They still drop the un-ID'd potions but when you go back downstairs from the fifth floor, the potions get auto-ID'd.
* There have been some reports of file corruption so if something is borked check for that. I'd say step 1 in the face of any weirdness, try a re-download. Similarly if it throws a 'font x is missing' error, it's most likely something effed up in the download process: there is a Fonts folder included with all necessary fonts.
* That said I'm sure my game is crawling with bugs. Help me identify them!
* There are two difficulties. Hmm. Talking about difficulty in games can feel kind of like a minefield. In this case, you have the opportunity to experience the game's events as a rookie or as a more experienced veteran. Obviously, playing as a veteran is harder. It's also how the game was originally intended to be played but puh-leeze like whatever on that phrase. It's not like some invisible...let's call him a "Game Genie" is secretly watching you, judging if you're playing the game in the correct, kosher, and sacred way. Play however you want.
That said if someone literally put a gun to my head and demanded I give them a more straightforward, unalloyed explanation of the game's difficulties, well first off, I would be TERRIFIED and i would scream and scream and Oh My God how did they get into my house???? how did they get into my house??

* Oh, and finally, I'm aware that the *actual spoilers*
Show
dragons at the end
are kind of a hodge-podge of different clashing artistic styles. Having cool, unique/different looking dragons was more important to me than being stylistically coherent here.


At least I hope so. The public beta is all ready to go (and it's not too optimistic of me to be hoping for a smoother launch than with The Dragon) but seems to be getting corrupted somehow during compression.

I have offered up a plea unto the community seeking aid in getting the game compressed for distribution without breaking it. I spent money on art assets specifically for this game, I need to at least make a gesture of protecting them and it.

One or two (or six) people pointed out to me that Agency FB is not easy to read so I switched fonts/typefaces for The Staircase to 'Hack'. 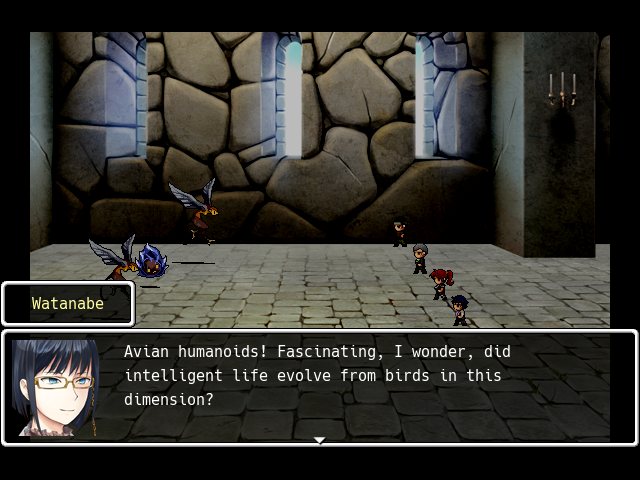 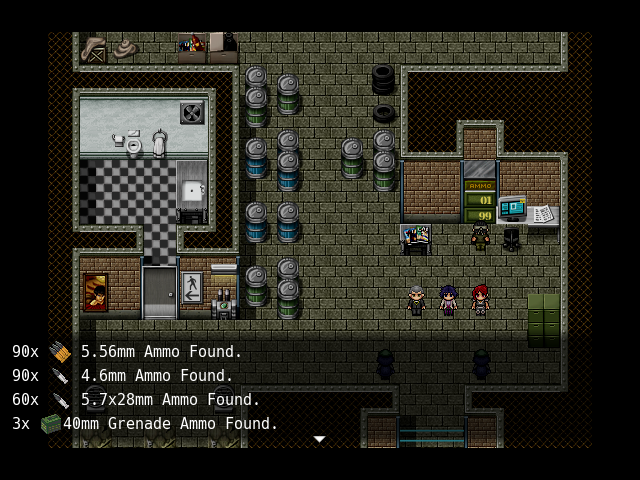 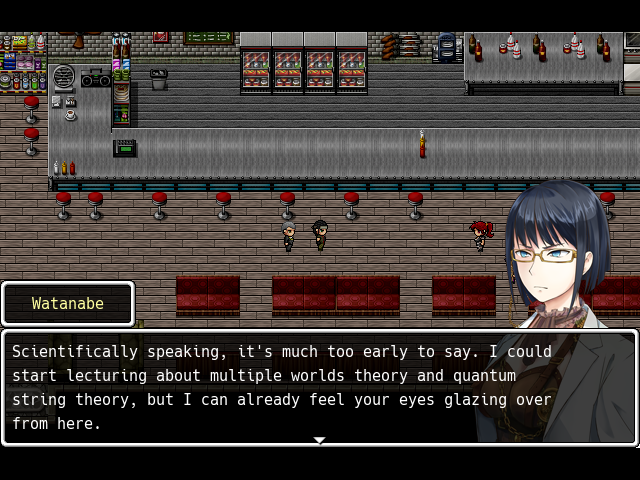 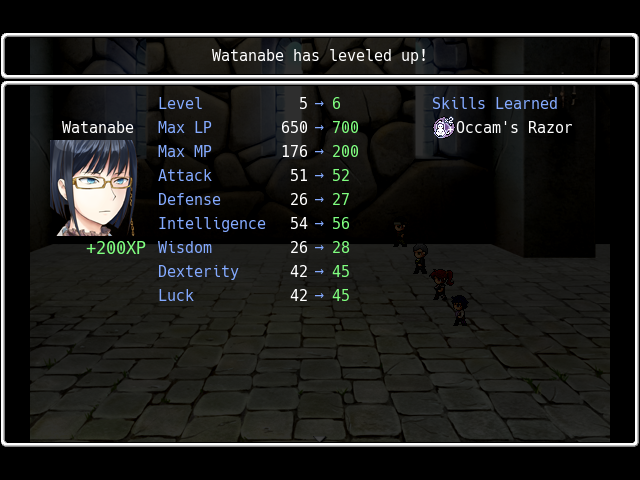 Better? Worse? What do you think? If the consensus is that this is a good font, I'll go through and finish rejiggering the rest of the show text commands and item descriptions in the game to make sure the text fits, since Hack is obviously much less compact than Agency FB.

I suppose I'll quiet my unanswered clarion call for more alpha testers at this point. As you might have noticed I posted a few...dozen?...screenshots, with more coming on Wednesday. Many of them are hosted on this page so I can show off some of the game's many features.

As a seasoned CIA operative, one of the skills Simmons has available to him right off the bat is called "Lift", allowing him to pick pockets. Unlike in many other RPGs (right now that glare is directed in the general direction of FFVII, but that's just because that's the one I'm playing now) stealing actually succeeds far more often than it fails. Items that can be stolen range from useful to powerful (with the exception of gold, a stealable item from only one enemy; team Earth has not figured out how to make use of gold yet). Stealing is a crucial strategy to stock up on potions which are more effective than the gear you brought from earth, or flat-out fulfill functions it does not (like restoring mana), and snag magical equipment early on.

Simmons receives a +25% to his steal rate when he has used Stealth on himself. 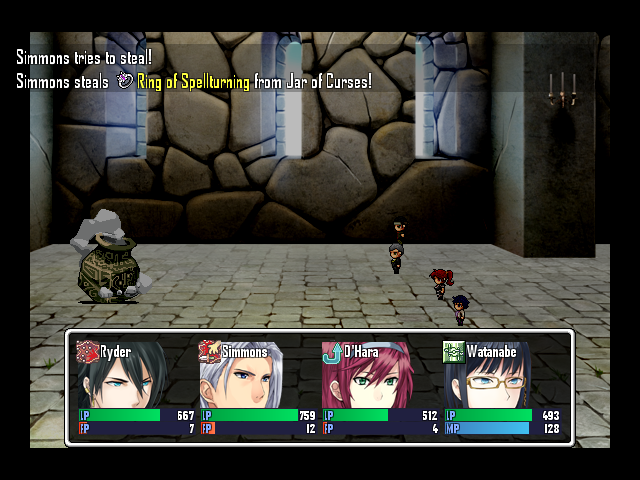 Reflect is a very nice thing to have.

The next major feature I'd like to tout is Watanabe's ANALYZER. 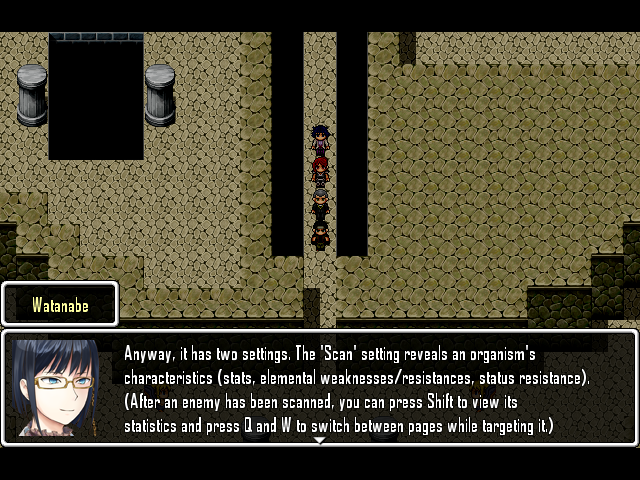 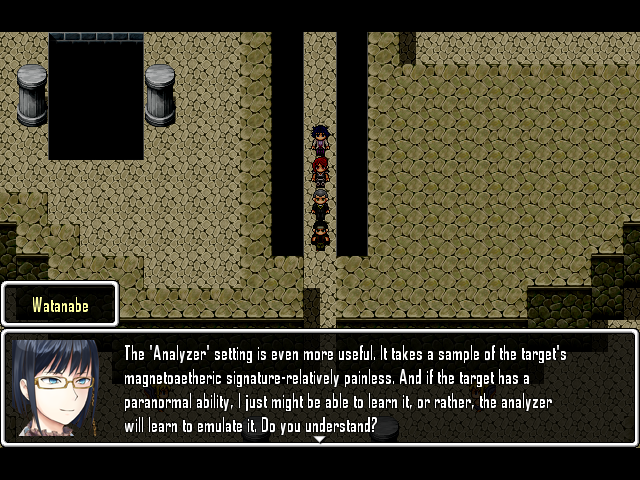 Well, she's probably explained it more succinctly than I could. Here are some shots of it in action, none of which are super exciting, largely because it seems that when hitting print screen I have to choose between screencapping the animation playing or the pop-up effect, and I generally choose the latter. I plan on figuring out one of those gif maker things one of these days. 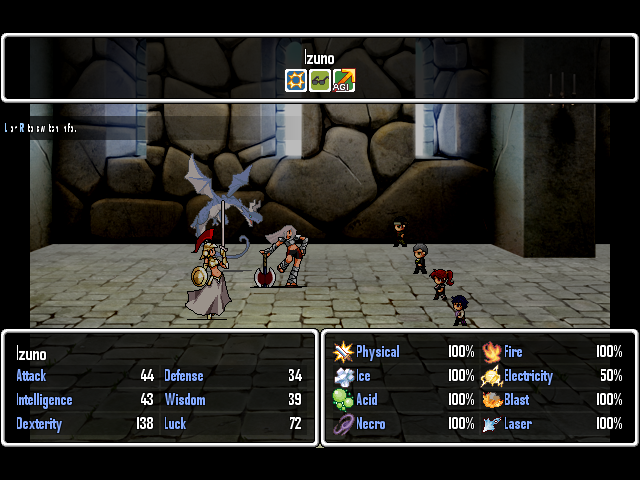 Here she has scanned default-Izuno, and therefore really has him dialed in. She can see all of his stats, elemental resistances, and his susceptibility to most status effects. (Incidentally, Izuno's Dexterity is only that crazy high because of the Haste that Teos, not pictured because grenade launcher, cast on him.) 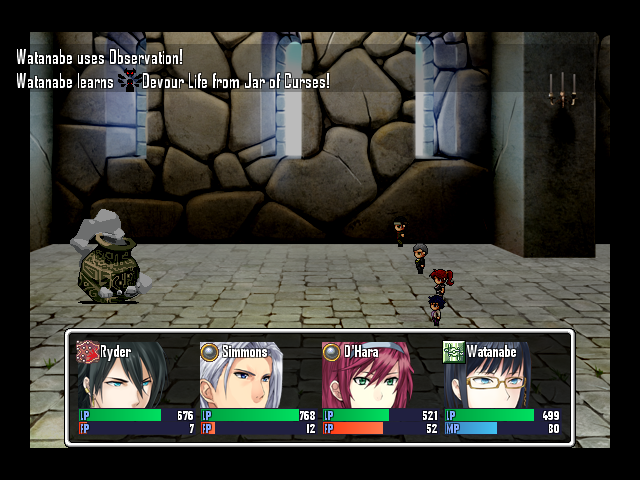 Watanabe can learn some very powerful skills by using Analyze on the right enemies. There are two categories of skills she can pick up using analyze, Sorcery, and Enemy Skill, but that distinction won't matter much until later episodes, where Sorcery will become an option for several characters but Enemy Skills will be unique among PCs to her. 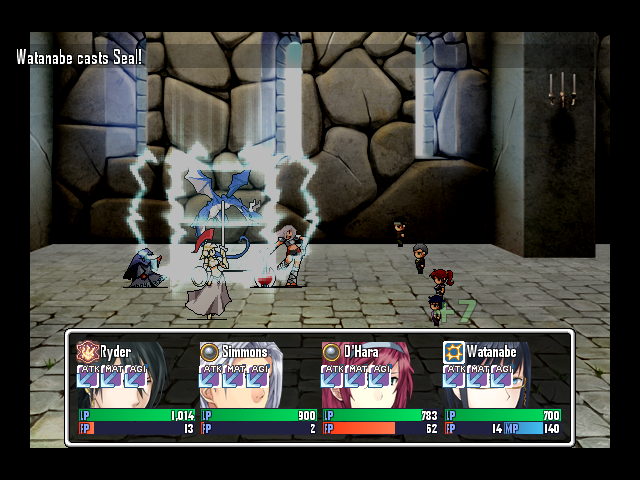 And here you can see her in action using one of those powerful enemy skills.

Depending on how many enemy skills you harvest, which ones, and how fast (it is possible to get several skills from a single foe) Watanabe can quickly go from being your weakest party member when you go down the staircase to your strongest half an hour later.

FEATURES DISCUSSED NEXT TIME: Identifying unfamiliar items, being unfamiliar with everything in general (okay, not a feature, more of a theme), and end-of-episode report cards: Research Points & Ordnance Points.

Looking for a couple more playtesters for this! I know a lot of y'all are busy with IGMC, but it can't be all of y'all! Come on, guys! Earth specops vs. RTPland!

Anyway the rest of this is addressed mainly TO the great playtesters I already have who I HOPE are automatically subscribed to this game by being playtesters. I was dumb and forgot to include the font AgencyFB in the game's Fonts folder!

Solution: download the font here and install it, please. That should fix all "text off screen" issues. AgencyFB is a much more compact font than Centaur which I think it's defaulting to.

I need a couple (two to four, to be precise) of seasoned JRPGers to playtest this here game, where you take an American Special Forces team quasi-legally sent to Africa on a harrowing journey into...RTP land. kumada has agreed to help out and he is awesome at playtesting. I believe JustAShyDoge author of the currently buzzing Cate Quest has told me he's on board. I needs two more!

Qualifications For Testing
A Lot Of Attention To Detail
A Little Bit Of Patience
That's about it really...I don't need to be treated especially gently, so as long as you're not so sharp tongued you'll make me want to cry/quit the project, you're qualified.

Questions, comments, critiques, all welcome (I don't have many screenshots up yet and the ones I do have may have been radically altered; someone told me something about pixel clash making me a bad person and it effected me deeply ;) )

Thank you so much!
Pages: 1