It's time for a fresh new start

Oh boy, where do I start? Maybe let's start with the game page itself because as soon as I looked at the list of characters in the game, with one-line descriptions for each one ("Player's Mom - The player's mother"... ok), I knew that this was going to be something else.

Now, let's name the good points, I liked the graphics for most of the characters, they look nice and consistent enough (Except for your father, he looks low-quality and out of place) and I appreciate people making Visual Novels in RPG Maker. It's amazing how it has all the tools right there to make a decent VN without needing a lot of scripting knowledge, making it more newbie-friendly than some of the more specialized programs, like Renpy. 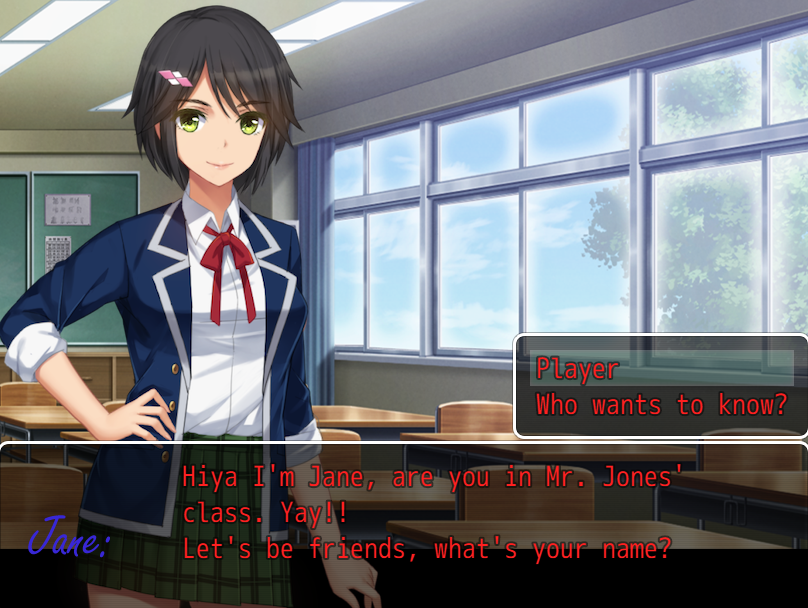 Here comes the harsh part though... As a VN, this game fails in the most important aspect of them: the writing. There are so many problems with it that I don't know where to start. I'm not a native english speaker, but yet I could still identify many spelling and grammar errors, I suggest to the developer to run all the script through a spell checker, there are many websites online that can help you with it. I personally recommend Grammarly.

But then comes the next part, and probably the hardest to improve because there's no easy way to do it. I'm not even sure how to exactly describe it as I also have problems with writing, but one way to put it would be: Things happen just because. Here are some examples: When you go back to your home after school, you find the abandoned house where the Babadook lives, and then it starts to haunt you. Why it didn't haunt other people that have walked that same road before? Why nothing happened on the way to the school, only when going home? There's also absolutely no build-up to the Babadook haunting you, you just walk in front of the house and *boom* now he's chasing you.

Another example, your father mentions something about needing a key to open the house where Babadook is, if I recall correctly, it was thrown down a well so nobody could free that monster. Then the next day, a girl finds the key because she just walked in front of the well that day, it's too convenient and ridiculous. Another problem is that it seems you are introducing various characters, but with only a few lines for each one, it's hard to care about them. There's even a scene where a new girl joins the class and some random guy instantly falls in love with her. Ok, that's fine, but are these characters important to the story? They never appeared again (though the demo is too short to say if they will have a more important role later on). And finally, everyone agreed too quickly to go to the abandoned house even though your father already told that the Babadook lives there, so why would you even want to go? 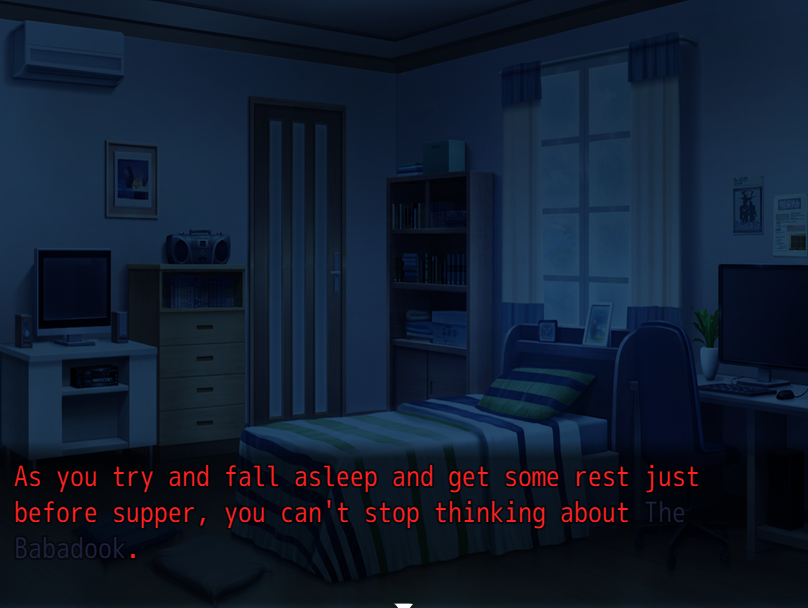 There are also some other problems: Why is all the text red? Why not just plain white so it's easier to read? There's also the issue when people name the Babadook, the text turns into a dark grey/blue color, making it hard to see in certain scenes. The name of the characters should have some kind of outline, because again, they kinda blend with the background, making them hard to read. Why are there so many save points? Sometimes they are back to back too, but the game is short enough that you won't need them, making them completely pointless.

My recommendation to the developer is to take a few steps back and really examine what they have in their hands. Try to look up tutorials on how to improve your writing and how to tell a consistent story. Honestly, I would even dare to suggest to scrap this game or put it on a long hiatus, focusing on other projects while building up their skills. Again, the most important aspect of a Visual Novel is the writing, so I suggest to practice a little more before tackling a project like this. Maybe even ask for a little help from a beta-reader? Or maybe start with a simple rpg story that doesn't require so many "nuances" in the way a horror story needs? The game has a release date for the full version in August 2020, which is a little excessive, but perfect enough if the developer takes the road of improving their skills before working on this project again.

author=Frogge
This entire review is secretly a grammarly ad

What can I say, it just werks
Pages: 1