I have added a belated dedication to this gamepage. That is all. Carry on.

A couple of people have commented that some of the screenshots are difficult to see or even that they had to squint and strain their eyes to play the game in the darker parts. So fortunately, I happened to be using a partially transparent solid black overlay and not the change screen tone command to accomplish the "mood lighting", so brightening up the entire game, luckily enough, could be done by changing the opacity of a single image. 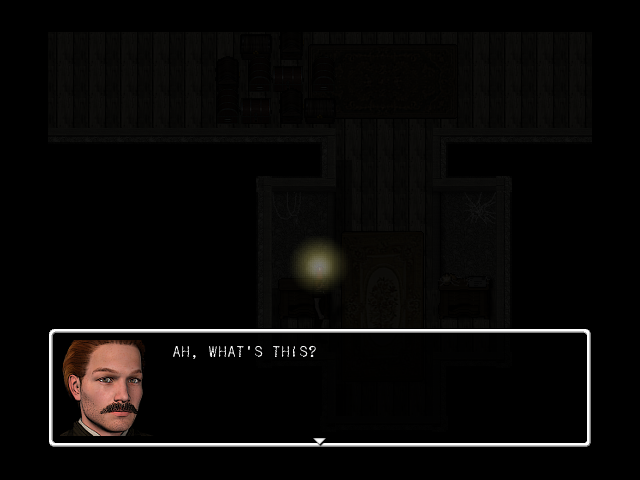 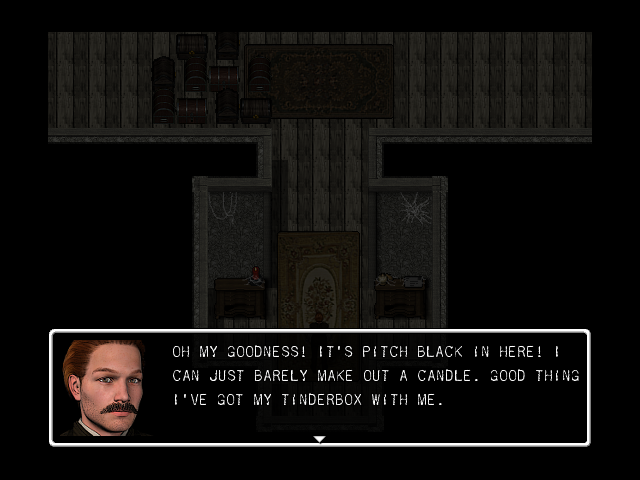 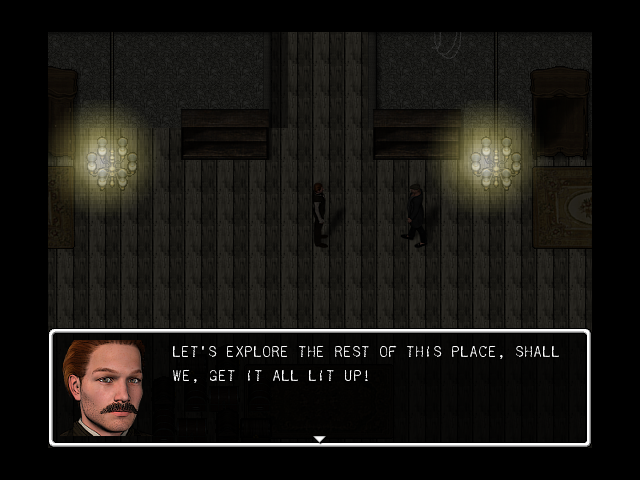 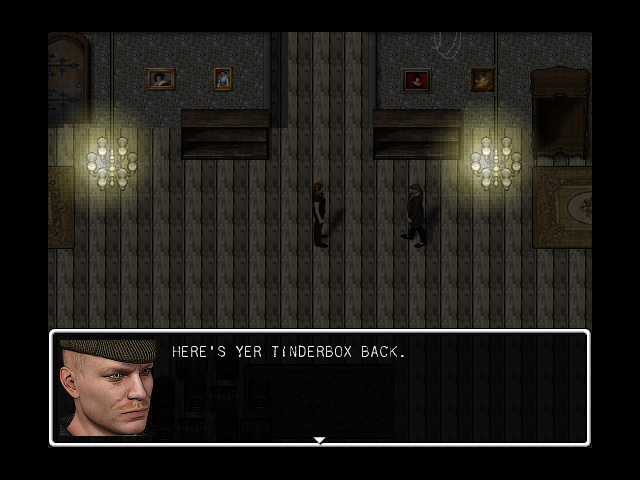 Hopefully that strikes a better balance between atmosphere and visibility on most people's monitors, but of course it's tricky because all monitors are a little different.

Coda: As you can see, I also added a cellar door and family portraits to the great hall.

For the July Theme Roulette event I got "Abomination", which is defined as:

noun
a thing that causes disgust or hatred.
"this bill is an abomination to all mankind"
synonyms: atrocity, disgrace, horror, obscenity, outrage, evil, crime, monstrosity, anathema, bane
"in both wars, internment was an abomination"

The first two things I thought of were Lovecraftian Horror and John Carpenter's "The Thing" (not in that order). Initially, I wanted to do a game set in space where you didn't know which member of the crew was a horrible monster. While I own the sci-fi tiles, none of the monster sprites I have in that mostly-RTP-compatible style are remotely scary enough for such a game, even supported by the most immersive soundtrack and setting: a little RTP monster coming at you just isn't scary.

So, the second thing I thought of was Lovecraftian Horror: I own PV Games' Mythos horror pack, so I had the resources to do a game that was a period piece. The next thing I thought of was the 1978 story "Jerusalem's Lot" by Stephen King which is a Lovecraft homage/pastiche about a creepy old mansion with a sanity-shredding abomination slumbering below it. The reason I jumped to adapting this story--besides that it's one of my favorite of King's--is that it has a lot in common with my original idea. A small cast trapped in a enclosed space in a tense situation. Most of your classic Lovecraftian Horror stories are in the 1890s-1930s period, as were the resources: King's story was set earlier, in 1850, which prompted me to do a LOT of research about technology and society during that period. What I neglected to do was read the story to completion before initiating gam mak. As a result of that, and of the necessary particulars of adding interactivity, the story of my game differs substantially from the original work: particularly, the ending.

To say I bit off more than I can chew is an understatement. I wanted to include a lot of King's prose in epistolary form, I wanted a simple but unique battle system, I wanted to implement maximum atmosphere by making the illumination in the house player-controlled, I wanted to make the PVGames tiles, that is the maps, look good, I wanted situations where you had to run for your life from a huge monster that was going to tear you to shreds, I wanted it to be scary, and poignant, and most of all I wanted a Sanity system that felt true to the Call of Cthulhu roleplaying game and Lovecraftian Horror in general. Having bitten off more than I could chew, and having lots of free time, I worked on this game feverishly, putting 8-12 hour days for about a week. While I do have a technically complete build of the game compressed as I type this, the deadline extension has given me time to polish and tweak which I'm grateful for.

In closing, Chapelwaite is a dark game in every sense. In the sense of simply being hard to see, I implore players to adjust their monitor brightness up so the game is easier to play. All I can go by is my monitor and my eyesight, via which even the darkest areas are still visible. In the other senses of the word dark, in Chapelwaite you are doomed. A variable called Doom tracked in your save game files gradually increments as you plunge headlong towards your inevitable doom. In the mean time, you have numerous opportunities to go mad or get slaughtered ahead of schedule. So yeah, Chapelwaite is some heavy stuff.
Pages: 1