A Boy and His Slime

A boy and his time crystal

I was asked to re-review this game because it had been updated, so I have ammended my review to reflect my most recent playthrough. 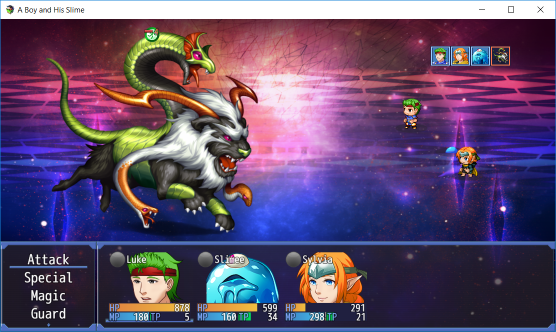 Lots of bugs dealth with. Last time you couldn't kill the Chimera.


A Boy and His Slime is a very much a game which focuses on gameplay. The basic premise of the game is that a Demon Lord is coming to destroy everything in seven days and you have to stop him, however this isn't possible and you'll have to use a Time Crystal to travel back to day 1 losing most things but getting to keep a few things. The game then sort of settles into a pattern where you try to accomplish a goal for each cycle of days. Each day you have a limited (at least in the beginning) amount of NRG which you can use to train raising stats, clean (gets you money), talk to girls, give girls presents, recruit girls but just for the day, go into mini-dungeons and fight bosses! Hopefully that is an exhaustive list. When I mentioned girls they are the other party members, you always have your main character Luke and his Slime but you can recruit one of three female characters to join you on any given day. For the final boss all three will join your party. Additionally there is an affection system with the three females but I'll talk about it more later.

To unlock additional bosses and dungeons you simply have to work your way through them. Some of the dungeons have a puzzle element, e.g. in the fairies' forest you are in a looping map with four directions and have to work out the order to go those directions (the game even offers hints if you get lost and wander aimlessly). In the dungeons encounters are handled by on screen enemies which works well. Combat varies a lot, while I would say generally the encounters and bosses get harder as you progress (barring a big drop in diffculty between dungeons two and three), with the time crystal mechanic the difficulty often ends up coming in spikes rather than a gradual climb.

The time crystal mechanic used to be handled by a new game plus plugin which worked but has now been replaced by a fully evented system and the result is much smoother gameplay wise, also this time I know the game took me just over five hours to play through. The game tells you mostly what you get to keep, equipment and achievements (basically powerups some of which only take effect on your next play through) and also most of the red portal bosses are one timers. While I get the impression this is an early RPG Maker game it avoids a lot of beginner mistakes, is finished and is fairly fun. In the last update the developer has dealt with a large number of bugs which really brought the game down, the only bug I found in my last playthrough was that the game didn't properly track the number of times I used the time crystal. 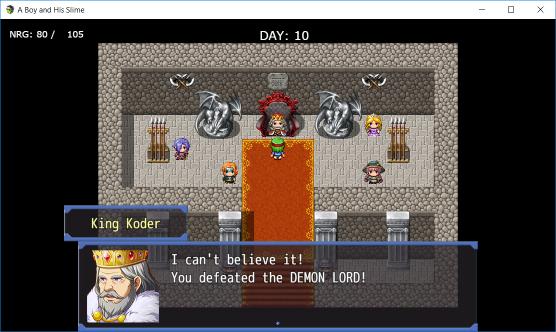 Sadly you still can't talk to any of your comrades.


The game also has some new content such as a puzzle area, though the puzzles seemed far too cryptic and I only managed to solve one. The game has several cool ideas such as the Hatcroc is a repeatable boss which gets harder each time you fight him and you can choose what seemed to be the best head slot items for your party as a reward. Which leads me onto wrapping up this review, a boy and his slime is a fun and interesting game with cool ideas, though be warned it seems to be on the harder side of RM games now.

If you want to give it a go I recommend cleaning with the maid 20 times to unlock the improved rewards and lower cost cleaning. Then stock up on the fire and ice defence items which should let you clear the early content. Once you get to 2000 and 5000 gold remember to talk to the chicken. You'll need to visit most of the dungeons with each companion to get every reward (it seems to be based on their affection whether or not they will unlock their map obstacles). Have fun!