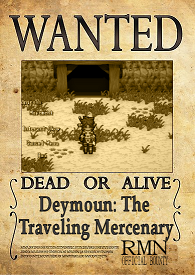 While, I'm aware that I'm too late to claim the bounty on this game. I'm also willing to admit that I'm not sure if I ever would have stumbled across this title if wasn't for the Review Pirates event. As a result, I do feel the need to thank the event for giving me another short game to play and review. After all, I've been trying to move up the ranks for a while now.

"Deymoun: The Traveling Mercenary" was developed by drassray using the Smile Game Builder engine for a game jam on another site. And while I'm curious to take a look at some of the other games that resulted from that jam. I'd probably be better served by focusing my energies in putting together a review for this game at the moment. So, I suppose it's time to dive into the story.

Story
Summary
You play as simple sellsword who travels the world in search of adventure and well paying jobs. After all, when your constantly on the move and stopping at inns on a regular basis it really helps to keep a full purse on your hips. Though, it appears that Deymoun is a bit on the unlucky side when it comes to the latter proposition.

Pros
On the plus side of the scale the game is a rather brief RPG that lowers the scale from saving the world to saving a single person. And, I have to admit that it's a nice break every now and again to go from having the entire world on your shoulder to just having to worry about saving one young life from the clutches of evil.

And while the game is short it also tries to flush out things about Deymoun's past over the course of the adventure. So while we don't learn everything about him. We do learn why he's a loner that prefers to avoid getting attached to others. As well as learn that a lot of his old enemies are still waiting in the wings. So the game definitely has sequel potential.

And, I'll admit that it's a nice touch that the only inn in the game appears to be owned by a married lesbian couple. After all, I can't think of that many games on this site that just casually include obvious gay or lesbian characters.

Cons
I wish the game dedicated a few more scenes to Marie.

"Deymoun: The Traveling Mercenary" is a very simple turn-based RPG with touch encounters. In fact, the combat in this game is so simple and straight-forward that it's hard to really get all that invested in it. Especially when you factor in how mind numbingly easy the combat is. Which is why I'm honestly thankful the game is rather short. After all, if this game was several hours long I'd probably find myself railing about how the game's combat is an Achilles heel that just kills any enjoyment you can have with this game.

The game is definitely a bit rough around the edges in a few places. After all, there are a couple of places where the main character is able to partially phase into solid objects like walls. 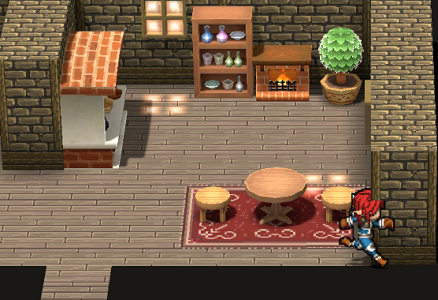 I'm the ghost of the last Elven warrior!

I also noticed an odd instance where one of the NPCs has a different look when you talk to him then the rest of the NPCs and PCs in this game.

On the left you see the normal look of the characters and on the right you see the one oddball that stands out.

And I'm not entirely sure how I feel about the normal look of the characters in this game. On one hand, I like the simple design with it's obvious fusion of shapes since it gives the game a retro feel. On the other hand, I'm kind of disturbed by the lack of a mouth. After all, it makes everyone look like they were silenced by that evil witch from "Buffy the Vampire Slayer".

I'll admit that I was a bit disappointed by the fact that the game doesn't have any sort of background music on the title screen. Though, I've been running into a lot of games like that as of late. Outside of that I'd say the rest of the music is passable, but not particularly memorable.

"Deymoun: The Traveling Mercenary" is a rather simple turn-based RPG whose only achievement will be helping someone find a way to kill 20 to 30 minutes. This isn't to say that this game is a bad experience that will leave a bad taste in someone's mouth. It just means that this game is just another forgettable title amongst all of the other average games on this site. As a result, I'd say this game is really only worth checking out if your looking for a quick game to play and review. 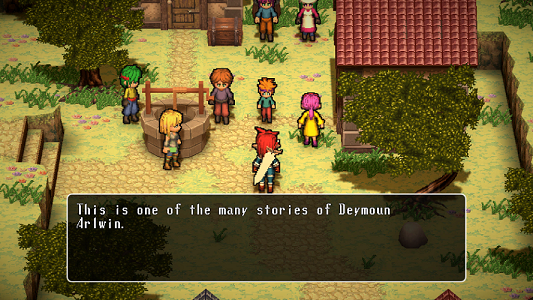 Close
02/09/2019 08:01 PM
Thanks for the review. Glad it could be somewhat enjoyable. The reason for the mixed character graphic on that one part is a throwback/easter egg referencing a previous game I made for a different jam. I had a friend actually making the character graphics for this one but they were unable to deliver in time which forced me to rush the mouthless 3D rendered ones I ended up using. So, it's no wonder it threw you off. Thanks again! :D
Pages: 1