Alex is a two-day collaborative game created by several makers of the old Gaming World forums (30 of them!) that made various maps, minigames and cutscenes in just two days. There were glued together to create this Frankenstein monster, or better, a Rpgmakenstein monster!

The game is, as you can probably guess, about Alex, the famous rpgamker2000 RTP hero that after a short intro will be thrust into multi-dimensional portal and will have to wander several different worlds, dreams and dimensions to reach his home.
Well... more or less this is the plot, but being this made by different makers in a really short time expect lot of weirdness, nonsense, pop culture and videogame references, and just a common element, that is Alex! 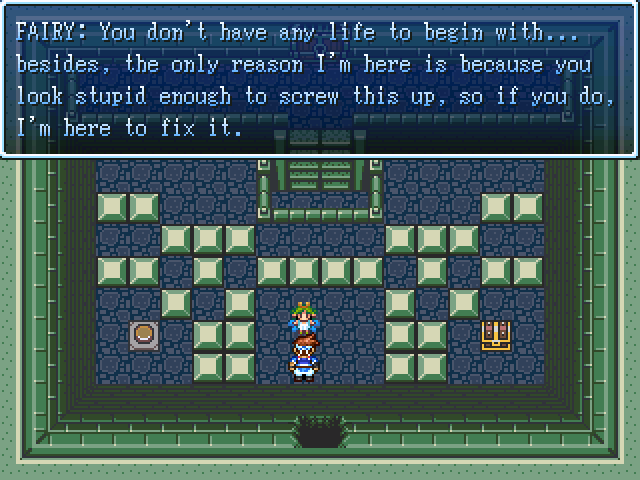 Remind to save often because in some cases screwing up is possible and there is no way out!

Now you understand whi "follow the white rabbit"? Like Alice in Wonderland, our hero Alex in Rpgmakerland will encounter jawas from Star Wars, morph into Link from Zelda, solve some puzzles (from labyrints to crate pulling and sliding puzzles) and quizzes, complete simple adventure games and fetch quests and explore some locations. There are also a couple of non-interactive cutscenes and lots of humor, but I won't describe every single map and minigame, just mention those that impressed me (in a good or bad way!).

The first jumping minigame is not bad, pretty easy!
To tell the truth most quizzes and minigames are doable, I also liked very much the crate puzzles and the music puzzle.

The cart driving part is nearly impossible, luckily it can be skipped! (and I'm sure everyone will do that!).

The factory part was really long and difficult because you need good reflexes and timing, and you also need to reload if you fail too many times activating the alarms, because it's possible to screw up, creating a loop in which you fail even before controlling Alex! And this means forced reload! (happened to me a couple of times). Luckily the escape part is easier... still I wished it was shorter due to some difficult moments.

A couple of cutscenes were really entertaining, two of them instead weren't bad but a bit... well confusing, as they did not make sense and Alex wasn't even in them, anyway the facesets, charsets and enviroments of those were pretty cool, and also well animated. Even if they seem not to fit the rest, they were short and well made. 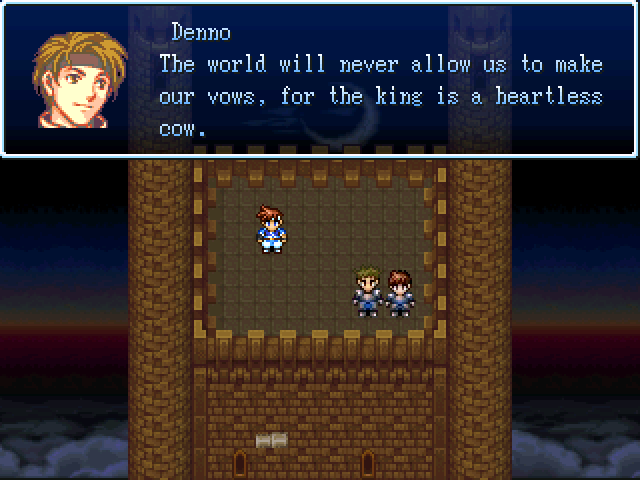 Poor guys! By the way this is the intro of the first minigame and it's not that bad!

The quality of the maps is extremely varied, some maps are totally simple and nearly empty and/or have some errors (but I found just a couple, and nothing game breaking!), others are extremely polished, detailed and well done, sprites, facesets and chipsets comes from various sources, so don't expect a boring Rtp game. But expect a lot of weirdness, instead!
I especially liked for example the warzone map, the village map seen below and the over-crowded city in which you have to wade among a ton of Rtp men, women and children to reach the exit, these were very detailed and well built parts an maybe fit the dreamlike theme more than the rest.
Graphically there are some interesting edits and sprites I've never seen before, the difference of style is occasionally present for humor reason, in any case this doesn't happens often, and given the particular situation of the game (both the multiverses story idea, and clearly also the collaborative characteristic of this adventure) is quite well motivated.

Same goes with writing, some parts are betters, others have typos and look rushed, but in the end nothing it really terrible and there are some clever and interesting part that will nicely fit a larger context. 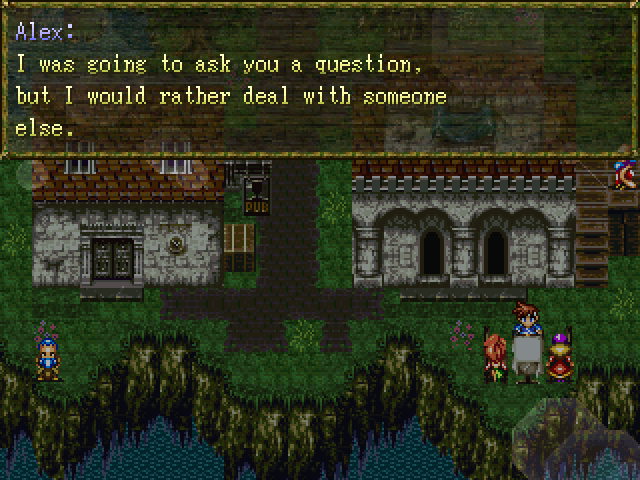 Ow that's harsh. Honest but harsh! Not every map is playable, for example this is a pretty nice cutscene!

Verdict
This is a nonsensical game that despite the varied quality of the various parts, has no terribly annoying or horrible and broken sections. Some parts taken separately would have gotten 3/5, others 4/5, nothing really deserved less than 2.5/5 so, considering the collaborative part and the short time, making a sort of sum of all the ratings of the different parts and considering the fun and humor of some of them I'll give 3,5/5 to this strange adventure (it's about 40 minutes to an hour long).

This monstruosity spawned some sequels and now it will be interesting to see if these will be better or worse than this one! So 3.5/5 it is. I'm glad I played it

I've just a question... where is now ALEX II? Hm it seems it's sadly unavailable.
It seems that I'll have to skip to ALEX III, but uhm, ok!

Another cool review, drawing attention to a mostly forgotten game.
You managed to explain the essence of this game in the review.
I think you were reasonable with the comments while still encouraging people to play it.
It's definitely worth a playthrough for RPG Maker fans, specially the old-school ones.

Man, I had a lot of fun playing this short game. You really need to put yourself in the mindset of when this was released to truly appreciate the insanity!

30 people making random stuff independently to then string it together as a "game"!

I love projects like these since they are usually very charming.

I found the cart driving part pretty manageable, and I'm not trying to brag or anything, I just figured out it controls like in A Link to the Past, where you need to press the direction you want to turn to, right before you reach the curve. This makes it playable.

Also you can skip the factory entirely if you talk with the guy right next to you when you teleport, apparently the main developer in the game thought the factory part was crap and so they made it entirely skip-able. I thought it was a cool section, even if it required a lot of save-scumming, so I didn't skip it.

One of my favorite segments was the demon summoning, and I won't mention what happens or talk about it much so I don't spoil it for other people, but it was really funny and I load my save several times to try out all options available!

It's a shame that there were probably a lot of private jokes only understood by the folks at Gaming World forums, now all lost to time.

If I'm not mistaken there is no ALEX II, they purposefully skipped it and that became an inside-joke.

I'm not sure how many games in this series were released, but there's talk of at least 5. RMN only has 3.

In order, it should be this game you reviewed, then ALEX III and then ALEX IS.

Might I also suggest taking a look into another chain game classic: Easy Mac.

It's not as high quality as ALEX since it's an older game and people were still figuring out the program, but it's just as charming and silly.
TheRpgmakerAddict

Oh yeah, the factory part was my least favourite of the bunch, but I did it anyway so it's doable (the beauty of these projects is that some segments are really easy, the others can be skipped so there is no impediment to enjoy and finish the game because you can also save anytime)! But there were SO many parts in this and Alex III that I really wished were longer!

Oh yes! Right now I am playing Alex III and it's twice the fun of this one! Better maps, minigames and plot (Alex & Carol looking for each other with two parallel bizarre journeys is double the fun!), I am really impressed! I plan to review that and Alex IS too.

Maybe some jokes cannot be understood, anyway there are also lots of recognizable references and homages to FF VI and VII, Metal Gear Solid, Pokemon, The Way series, Demon Legacy and many other games.

The problem in finding these games is also because another series with the same title do exist...but it's german! Anyway these lost classics are still very enjoyable at least for me!
Pages: 1