Hello!
I really wanted to like this game as it is one of the rare sci-fi/post apocalytic rpgmaker games. And also it's a game by J-Man, and I had a lot of fun with his Phantasia serie.
There are many good ideas here, but unfortunately some problems ruined an otherwise good experience. So, this time I will star with the bad things:

The Bad
This is a decent games marred by problems: one is the extreme linearity, but extreme in the sense that if you try to do something unexpected, you will face a (often game braking) bug. Es:
1) You re-enter the prologue building! A wrong cutscene starts and game freezes!
2) You go back to the cell not using the vent passage? A wrong cutscene starts and game freezes!
3) You visit the rebel camp after the attack and go to the office... you meet someone that was not supposed to be there. But the game at least does not freeze!

Then there are a lot of small problems like typos (habtis, theif, bitcin, peice, organsims, nessecary) and the fact that in combat the command Defend sometimes disappears (often during the boss fights, where it would be really useful!) 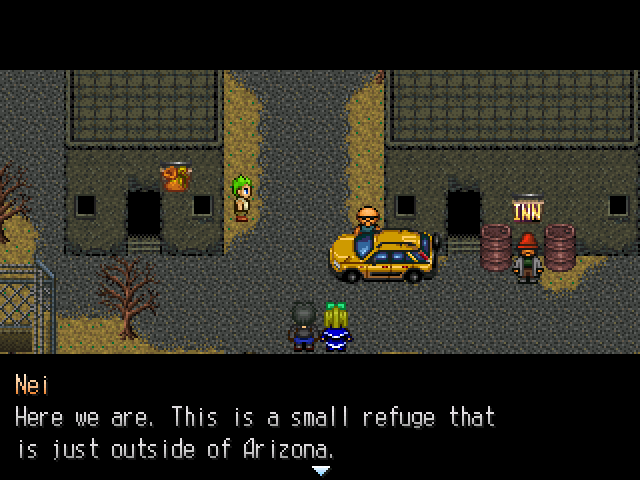 And then there are the huge game-breaking problems such as one map with closed exits due to rubble in the way, a password that will be refused even if correct (because you have to include the exclamation mark too!) and lots of stupid things that... well yeah these are stupid things that would be solved in few minutes with a playtesting, and that's even worse because there's also...

The Good
Yep! I'd have given a score of 1 otherwise. Because this game has many nice features too:

Mapping is from average to good: maps aren't exceptional, but serviceable, dungeons are small and not too complex. I like that but I liked even more the choice of chipsets, as there is a perfectly appropriated selection for the different locations, and that's unexpected, considered how hard is finding modern chipsets especially if you have to create a sci-fi/post apocalytic.
I liked a lot both the setting and the enemy sprites used.

Ok, since I spoke of enemies, let's speak about combat: side view battles with nicely animated characters (even if they do not match the corresponding charsets), nothing unusual as you have the usual commands such as attacking, using skills, using items and (sometimes!) defending or run away.
Difficulty is ok, you can grind for money & power but it's not necessary to spend a lot of time doing that as the only hard opponents are, of course, the bosses, but the difficulty is variable as they randomly choose their attacks, so it's not always too hard.
Random encounters instead are another matter as I noticed that you can always flee from them with ease.

BUT what I liked most is how the four characters are totally different: the male protagonist is a gunman that can unlock different abilities by earning blueprints and bringing them to a helpful npc. He also regenerates MP in combat. The female protagonist is the classical elemental mage with weak attacks and strong elemental skills whose MP are regenerated with the rare ether. The robot is totally different: he never level up, but he can be upgraded with programs, can use two guns and cannot be healed but has to be repaired. He's also clearly immune to poison, diseases and has no MP.
Finally the cyborg instead earn his skills by levelling and can recover the MP only by resting.

Weapons are different kind of guns, some of these even attack everyone, others have some kind of element affinity. 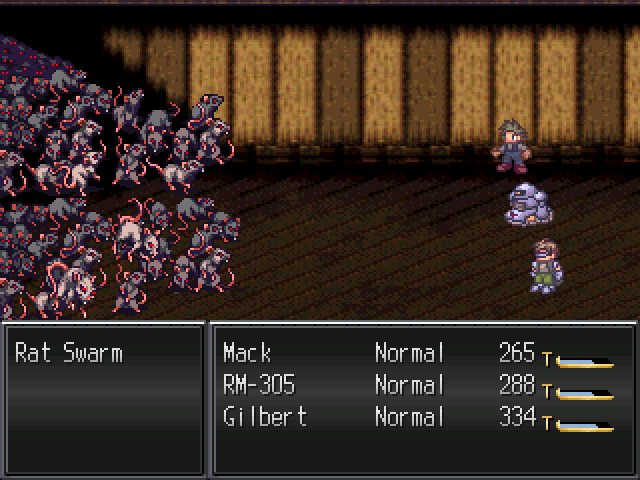 The... Ok?
Well story is not overly original, predictable, music is decent and dialogues are ok (except for the typos, of course). Don't expect an epic tale or a great adventure, as, from what I've read, this was supposed to be a game for a contest, so it was done in a short time. If only also these bugs were removed it would have been a nice little game!

Final Thoughs
A pity, this could have been a nice entry and I expected a post-apocalytic Phantasia, but... the game is marred of little imperfections that destroy and otherwise pleasant experience and fun adventure.
It's clearly a shame as with a little effort more, the result could have been totally different. And the rating too.
Well, better luck next time, then!

Close
04/15/2019 12:42 PM
Umm... While I appreciate the review. You're probably better off playing the remake of this game Lost Land Ruin VX, as it's a LOT more complete, more playable characters, and a lot less... problems. :P

But thanks nonetheless, haha.

This game didn't age very well, hell, I don't like it all that much, the remake fixes a lot of the problems I had when I made this on rm2k3. So if you're tempted to give this game a try again, play the VX Ace version instead. :P
TheRpgmakerAddict

author=J-Man
Umm... While I appreciate the review. You're probably better off playing the remake of this game Lost Land Ruin VX, as it's a LOT more complete, more playable characters, and a lot less... problems. :P

author=J-Man
This game didn't age very well, hell, I don't like it all that much, the remake fixes a lot of the problems I had when I made this on rm2k3.

Well I love the old sprites/chipsets taken from Albion. I guess that I'm getting old! :) I also think that the main problems/bugs could be easily fixed so... I'd be more harsh if there were case of unbalanced combat, bad mapping or sprites that are out of place, or other worse problems. Non-fantasy games are always hard to make due the few resources available.
KyleLascar
120

True words of wisdom that, from now on, shall be known as the First Commandment of RPG Maker games.
Pages: 1