The Misadventures of a Fae: The Three Palantirs

Sacred Reviews: The Misadventures of a Fae

"The Misadventures of a Fae: The Three Palantirs" is a game developed by Frogge and Mirak as part of the Swap in the Middle with Two event that ran from August 24th, 2018 to September 27th, 2018. As such, this game was thrown together in about a month and does surprisingly well for itself. Albeit, this game is filled with minor bugs galore, but I'll get around to discussing those later. As it stands, this is a fairly solid little comedic RPG.

Main Character's Name
You play as Falus, a retired fairy, whose name makes me wonder if the developers were inspired by the word phallus when coming up with his name. After all, it's disturbingly close in my opinion. Albeit, this may just be my dirty mind at play.

Strengths
On the positive side the game is filled with subtle references as well as solid attempts at humor here and there. Albeit, I tended to rush through the story at a break neck pace at times. So, I probably missed a few jokes that would have appealed to me. Albeit, you do have to love how the final boss has a cloak that was probably died by Dartz from "Yu-Gi-Oh! Abridged".

Weaknesses
On the downside, a few of the jokes fall a bit flat. Like I really didn't get the joke about ASMR videos at all. Though, I suppose that might be a byproduct of my ignorance about the topic rather then the joke itself not being funny.

Puzzles
I'll be upfront in admitting that most of the puzzles in this game are fairy easy to solve in my opinion. In fact, most of the puzzles revolve around well time movement then anything else. As such, it's pretty easy to get into the game's groove if you give yourself a couple of seconds to pin down what that groove is.

Combat
On the combat side of things, the game features your standard turn-based combat system that's featured in so many other games made with RPG Maker VX Ace. As such, it's nothing particularly exciting in that regard, but it does catch my attention a little bit with how the enemies are framed on the combat screen. After all, it's not every day I run into a game trying to mimic the style of "Dragon Quest". As for the combat difficulty, I'd rate the game around casual for the most part. Though there are a couple of battles that push that rating up to moderate.

I'll be upfront in admitting that I hated the music in this game. This isn't to say that I didn't like certain songs, but you can only listen to "Ghostbusters" by Ray Parker Jr. or "I Write Sins Not Tragedies" by Panic! at The Disco so many times before you get sick of it. This is why most games don't include songs with lyrics for the most part.

"The Misadventures of a Fae: The Three Palantirs" contains several bugs whose severity ranges from minor to mildly irritating. As such, I'll start with the more minor bugs and work my way towards the more severe ones. Albeit, a few of these may be fixed before this review becomes public. And before I start, I'd like to mention that I found a few of these thanks to Mirak reporting them on the game page. 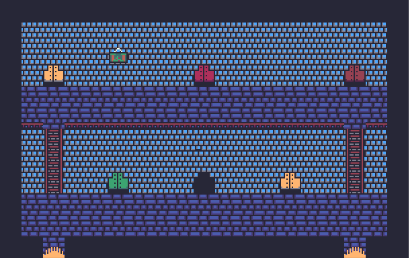 If you look really carefully above the central door on the lower level you'll notice that one of the linese is slightly thinker then the others. This is because the main characters hair is slightly poking out from the other side. To be honest, this bug is only visible for a brief few seconds. So, it's pretty easy to miss if your not looking for it. 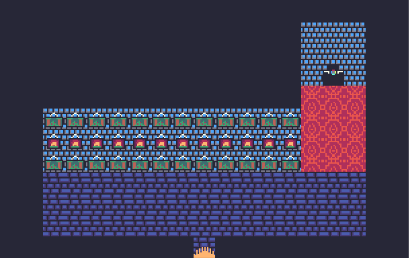 author=Mirak
Btw there's a passage mistake before entering the boss room, right at the door, you can walk behind the walls there.

While, Mirak already reported on this issue. This bug actually goes beyond what he reported. 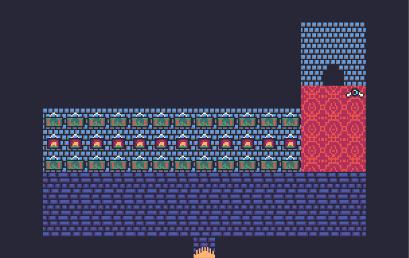 As you can see, you can actually walk through the walls next to the door that leads to the final boss room. And you can also run circles around the event you need to step on in order to be sent there as well. 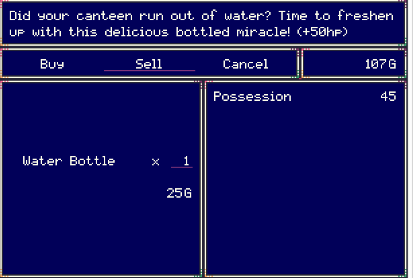 Now you might be asking yourself? What's wrong with this screen? And to be honest, there isn't anything wrong with this screen specifically so much as you can sell water bottles for 25 gold pieces, while only needing to spend 10 gold pieces in order to buy one. As such, you can easily milk this bug for an endless supply of money. And to be honest, I didn't discover this bug on my own but found it thanks to Mirak.

Though, I'll also mention that if you make liberal use of the beds in this game and go after every enemy you can get your hands on. You really won't have much of a need for this glitch. Heck, I was able to go into the final boss battle with over 50 water bottles and an entire lake's worth of chamomile tea. 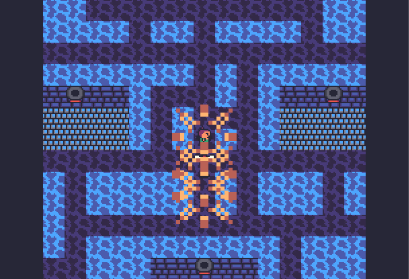 In the final area of the game there's a little mini game where you need to dodge explosions while making your way to switch in order to deactivate them, but if you stand perfectly still the explosions don't effect you for some reason. And on rare occasion if your timing is just perfect, you can walk right through the explosion. Though, I'll admit that the likely hood of pulling that off is rather low.

Even so, I was blessed by good fortune during my Let's Play. So, I can actually make a gif of this bug in action.

As you can see there's a noticeable delay between when the rock stops rolling and when the explosion goes off. This doesn't always happen in this room, but it happens often enough that you'll probably catch it at least once. Especially since you need to enter this room multiple times in order to complete this dungeon.

Well, this covers all of the bugs that I'm aware of so far. Though, I doubt I'll go back through this game in order to find any others.

Despite being a bit of a buggy mess, "The Misadventures of a Fae: The Three Palantirs" is a fairly solid comedic RPG. As such, I really can't bring myself to hate this game despite it's numerous bugs getting in the way. Though, I suppose I'd feel a bit different if this wasn't an event game. Or if this game managed to overstay it's welcome.

I'm so happy about that score, sacred. From watching your reviews, I actually thought you weren't having much fun with this game and my predicted score was a 2 or 2.5, with a 3 at best if I'm lucky. It's a pleasant surprise, I'm super glad you enjoyed your time with it!

I never actually considered Falus' name being close to Phallus, but now that you mention it, that's probably the joke Mirak was going for. I did expect that a few of my jokes wouldn't land so well, this is something I've been pointed out in other reviews. I admit my sense of humour isn't amazing, but I'm glad it wasn't terrible. As for the ASMR joke, it's actually a reference to how so many people on youtube these days just get really close to the mic and whisper really quietly like this and get crap tons of views. (ASMR vids are basically vids that are supposed to give you some tingly feeling of relaxation, in case you may not have known)

I was surprised by how easily you got through the combat, mainly because I never considered that people might stack up on water bottles and spam them to beat the bosses super easily. Like I commented on your let's play, I actually only carried around 2-3 on me at all times and only used them in either powerful troops or bosses, once or twice each playthrough at most. Not to mention I pretty much NEVER used the tea. I might look into making water bottles a bit more rare in a future update or increase their price while decreasing the enemy drops, or just add that in as a hard mode.

For the bugs, the door issue was something I was aware of but simply didn't want to bother spending time on to fix. The room with the paintings bug is definetly something I'll look into in a future update, as well as the fact that items sell more than they cost.

The cannonball and boulder issue I sadly have no idea how to fix. I tried for a while but I just couldn't find a solution (though the cannon one was an oversight I could look into later) so I thought it was okay to let them stay. There's a similar issue in the tar room with the dragons spitting fire where the fire first spawns in the room before going to its correct location. Believe me, I tried literally EVERYTHING to try to fix this, but couldn't find a way.

Thanks again for the review and glad you enjoyed!
Pages: 1