A gate made for dragons or a gate made of dragons?

In this game Iris and Nadya, an archeologist and her guide searching some ruins in the snowy lands, looking for the Dragon's Gate, a portal to another world. Soon they discover something, but what will be hidden there forgotten by the ages?

If you are expecting an rpg or an adventure game (and you were allowed to do that due to that plot) you are wrong since Dragon's Gate is a puzzle game. Or, better, a collection of small different puzzles that the duo of adventurers have to solve to unlock the final gate. So no combat, no quests, no exploration, but for an event game, this is ok. And and also perfect for players like me that like spending some spare time, less than an hour, playing a little game from the beginning to the end. In the case of this game my time was forty minutes (but probably if you already played that you can finish it in half of the time!).
I don't think I have to specify that in this game not only there are no battles, but you also cannot die or get stuck anywhere, I mean there were a couple of bugs from what I've read, but they were corrected, and I found no problems, bugr of errors of any sort during my playthrough. 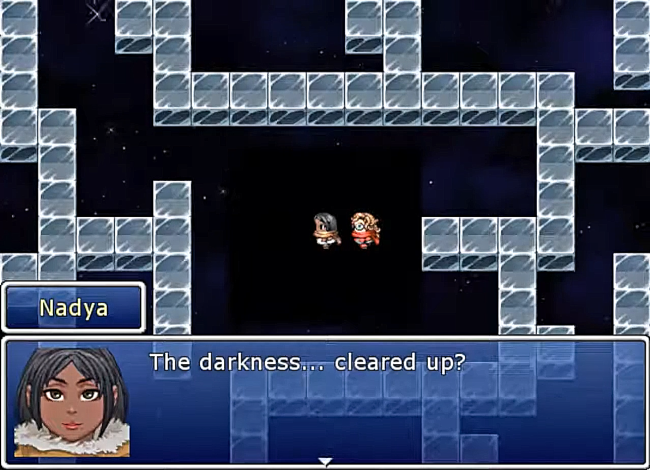 Yes! The Gate is Darkness is activated! You cannot see that, but all was darkness here before, of course!

Ok, I won't waste much time talking about mapping and assets, since it's all basic but in any case it is functional to the puzzles we're going to play. These ranges from finding switches, solving maze or pushing something around, but I do not want to spoil the solutions, since you can also find those on this pace, but also because it's very satisfying solving these six different tasks, even if probably they are not very difficult but they made me feel clever! Ok, it's not a game that can take you occupied for long, still I was really surprised by the variety of puzzles, more than I expected.

I also was surprised by how interesting the two protagonists, ok story is pretty short and there are not a lot of dialogues, still I liked how the two characters are represented with their bickering and sarcastic personalities, I mean I found them surely better than most other protagonist of longer and more complex games.

Final Verdict
Dragon's Gate is a simple and short, but enjoyable collection of little puzzles, I admit that I am biased because this is how I like my puzzles: short and not too difficult to become frustrating, varied and simple. All the rest, from music to graphic, was also pretty good included the adequate abrupt ending, that considering the short time and the swap-in-two aspect of this product is not too bad I guess. I mean I played, I found the Dragon's Gate and I had fun doing this!

This was an interesting game to receive, since I'm terribad at making puzzles. There was at least one area/puzzle from Jeroen_Sol's half that I wasn't sure how to arrive to the solution without looking at the events. I left it unmodified, regardless. For what it's worth, I already felt bad for modifying this area/puzzle because the original version lagged so hard on my computer. ;_;
TheRpgmakerAddict

author=Marrend
Thanks for playing, and reviewing!

This was an interesting game to receive, since I'm terribad at making puzzles. There was at least one area/puzzle from Jeroen_Sol's half that I wasn't sure how to arrive to the solution without looking at the events. I left it unmodified, regardless. For what it's worth, I already felt bad for modifying this area/puzzle because the original version lagged so hard on my computer. ;_;

Well yeah I am terrible at puzzles but I liked thst even if the first one you mentioned was probably my least favourite but uhm it is ok. It was a nice simple adventure.
Pages: 1