Despair, I choose you

Kainworks is a new exciting developer we should all keep our eyes on. This is only his second game and It's an intriguing one. He uses custom graphics and original battle systems for both of his games. We can see some of the ideas formed in his debut, Heroic Tale. That game pushes its retro aesthetic hard. It looks old, it behaves like an old game, the writing is cheesy af and most importantly sources of inspiration are old games. That's where it's interesting and where Kain differs from most developers on this site. Instead of Dragon Warrior or Final Fantasy, he drawing it from games that preceded console rpgs. The game's inspired by dungeons crawlers such a Wizardry. I find that part really good, because the developer managed to find a new way to display the difference between first person and top down look. In Heroic Tale, there's a fog of war, which simulates line of sight of old crawlers.
It was an interesting game albeit a flawed one. Flesh in many ways builds on its legacy. This is a jam game, made in a limited time and restricted by the jam's theme. It had to be inspired by a fictional Famicon cartridge. That said, the game explores the idea a lot and feels like a full fledged game rather than a demo or a prototype. It is a completed game.
The one thing I especially like is that Flesh adds modern influences. Pokemon is one, as your main striking force are sands of monsters you defeat, which allow you to summon (undead) monsters. These help you in battles. They're essential for you to progress. You need weaker companions to be able to defeat stronger ones and this chain continues. You need to choose your battles too. Most of them are avoidable as vile creatures have scripted simple patrolling and the game only really forces you to find several times.
The other game, which inspired Kain must be Dark Souls. The world of Flesh is very dark, destroyed and without hope and it's difficult to survive in it. In other words, you die a lot and deaths can be sudden. Resources are scarce and all items matter. It's rare for me to really need healing items and care about them.
In general the design of this game's very good. Everything connects together in one captivating chain of events. The map is a maze, which subtly directs your progress (you can only access some areas after obtaining certain items). There are many loose ends, which might look like bad mapping, especially because they don't offer any treasures or points of interest. However, they're great in making you frustrated with this damned world. 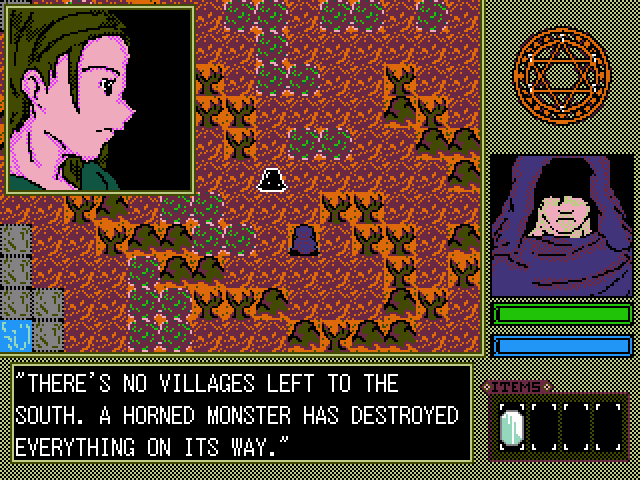 This game takes place in Detroit.


This desperate space works great with writing in this game. You don't follow lengthy cutscenes. Other characters are these lost souls residing in hamlets scattered on the world map. I love the scale here, btw. You talk to both demons and humans and they both share tine bits about the world with you. Some of them give you an item too. I find the mysterious tone enjoyable and not knowing quite enough about the situation is a great motivation to continue playing to find out more about the world, its history, its inhabitants and its geography.

The map might be puzzling in its design, but puzzles aren't meat of this game. Battles are. They're the kind I enjoy the most. You have a minimal amount of options, your character has a very low number of spells and no basic attack, because he's a wizard. Numbers are low and it's all about managing your resources and the game trying to exhaust you to death. I personally favour this approach, but it's not for everyone and some might find battles to be too barebone, not really balanced or just quit because of how frustrating they might be before you figure them out. The game give you minimal information on how you should play and where lies your goal. It's about roaming around and finding out by trial and error. That could be considered off-putting. Kain makes death more acceptable with only punishment being your return to the starting location, but the first five minutes can scare off softer players.

The last thing I would like to mention is presentation. It's a step up from Heroic Tale. Everything looks consistent. Tiles and pixel-art in general is simplistic and it adds greatly to the thick atmosphere of the game.
I really enjoy the UI created for this game and It doesn't bother me that the character isn't actually centered at bigger maps. It's more acceptable than I expected it to be.
The soundtrack consists of retro themed songs by Ocean and it surprisingly fits the grim atmosphere of the game.

Overall, the game is packed with great ideas, which are decently executed. I think there's space for improvement to tighten the game up, make you not only interested but invested in the story and your progress from zero to hero. This is why I rank the game with four stars instead of five. I think you can take it and turn it into something golden and even more enjoyable. The difficulty might be addictive if served right. Here it lingers on the frustrating side, because the motivation isn't sufficient. Battles could be made more attractive too and environment more defined.
The game as it is now is great and a small technical wonder, tho. I had a great time playing it.

Close
01/31/2019 07:40 PM
Thank you so, so, much for... well, many things! First, obviously, for playing the game and taking you time to write such a detailed review, but also for seeing past those perfomance issues and major glitch we already commented about.

As much happy as I am knowing you enjoyed aspects of the project, you made very interesting and valid points about its weaknesses, so I'm taking all these useful insights in hopes of being able to make, in the future, something the player might feel more involved about, among other things!

I'm beyond grateful and I totally mean it! ^^
Pages: 1