Pianotm: The House of Gwendolyn

The House of Gwendolyn is a very atmospheric game made for the "Twisted Fairy Tales" event, and is based on the fairy tale Cinderella with a few twists. The 'death' of your father is by no means an accident, and you are not just a housemaid, but need to brew forbidden, dark potions. Dark magic is involved. As per the event, the base story has been twisted in some form to make it morbid or otherwise out there.

I will try not to get into too much detail of the plot, but the atmosphere will be largely spoiled regardless. It is a short game, and well worth playing if a bit of tedious walking can be ignored. The opening sequence is one of the best, if not the best, I have ever found on this site.

In the game you are playing Ella, whose father was killed, and who is at the killers' mercy, namely your stepmother and her two daughters. Only a magical contract that formed during the last conversation secures your life, but not your safety, as the only condition is for you to not die, and that by the hand of your stepmother. Thankfully, you may find ways to make yourself useful to them, even if that involves dirtying your hands.

Gameplay is "putting yourself to good use", in a nut-shell. You collect ingredients, you cook, you concoct potions, learn new recipes (though only very few are introduced), and you even get to fish and chop wood! 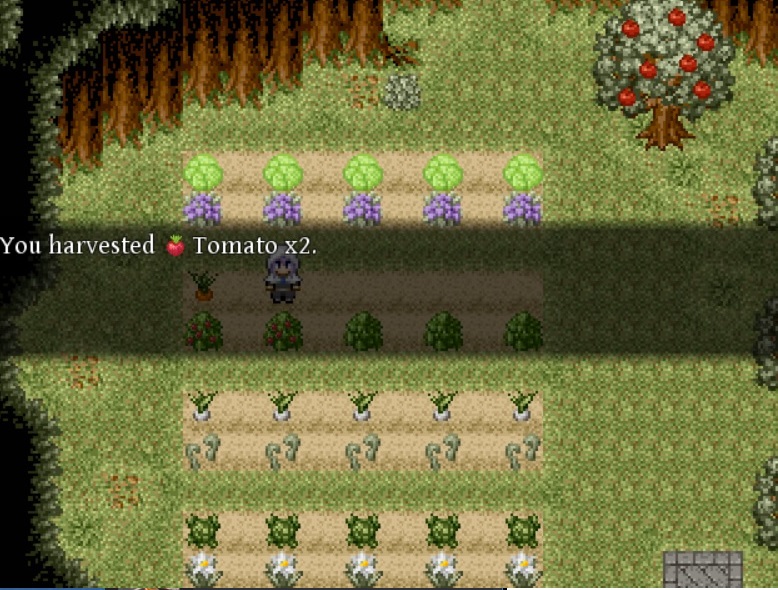 And the music, my god, let's not forget the music playing here!

If this was done willingly, you might as well be playing a farming simulator. While these actions are all kept fairly simplistic in its execution (press enter, done), they provide a great backdrop and could easily be expanded into a long-spanning adventure of serving your killers. Cooking involves a little more input though, and so does alchemy. You wait for the loading bar to turn green, lest you lose your ingredients. I quite like this approach as it needs some patience, but is not tedious either, as you do not need to make loads and loads of things.

Additionally to the farming and cooking things, as much time will be spent on simply navigating the needlessly large mansion and to make sure you are not entering any dangerous rooms or overstepping your boundaries. If you do not have all the ingredients you need - well, the only person who can give you permission to use things is Gwendolyn. So to Gwendolyn you go, hoping she isn't mad at you for needing anything. The list of errands simply continues, and once you cooked one dish, the next day you may need to cook another. You simply do not know how long this will continue, and it might well do so forever - and the gameplay supports this.

What is the only gripe about this is that comparatively, a lot of time is spent walking around doing nothing. The mansion is dreadfully complicated, and while it makes you feel nervous the first time around, once you are more acquainted to its layout, it simply is a huge mess to navigate nonetheless - particularly three main cross-road points that look almost identical, and could so easily be reduced to two with no important rooms being missed. That said, I do think a general sense of tediousness is not bad at all for the story and feeling it gives you - walking around the place to fulfill your duties. The lack of orientation at first made for a really long gap between story segments though, as the one door I needed to enter was literally the last area of the entire mansion I checked, making for perhaps 10 minutes of wasted walking around (and the intro sequence was so good too, I really wished I could have kept the chain going). It would be lovely it was easier to navigate in, even with the additional balconies and other small rooms present - even if that was achieved by just making the hallways a tiny bit smaller (rooms tend to be fairly wide in general, though many rooms also avoid this). Also, this tiny gap in the middle I did NOT recognize as a doorway at first, and by god, these are the most important. 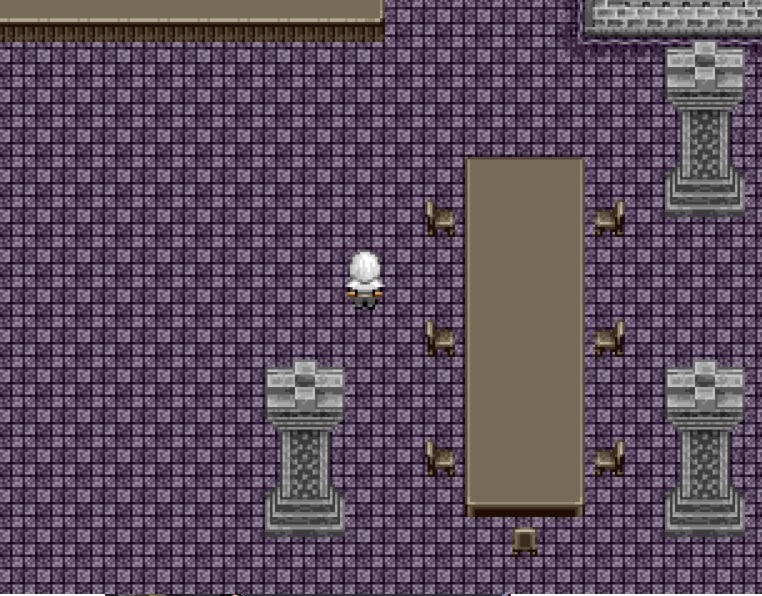 This map though, this map is way too large. It also is not broad enough to hint at the length of the hallways spanning under it. Make it wider, not deeper!

The alchemy makes for a similar tedious element by itself, but is used to great effect as the ingredients involve human body parts, and you are forced to work with them. It's used to great emotional effect - similar to the cooking. Do you want to cook something easy and simple or go all out? Are you willing to share your favorite recipes with your captors? You decide.

There are some major plot points in how Ella handles these chores - or how you choose to do so. You may try to wriggle your way out of them at times, but more often than not, Gwendolyn sees through you and forces you to do what she says as she is one step ahead of you. 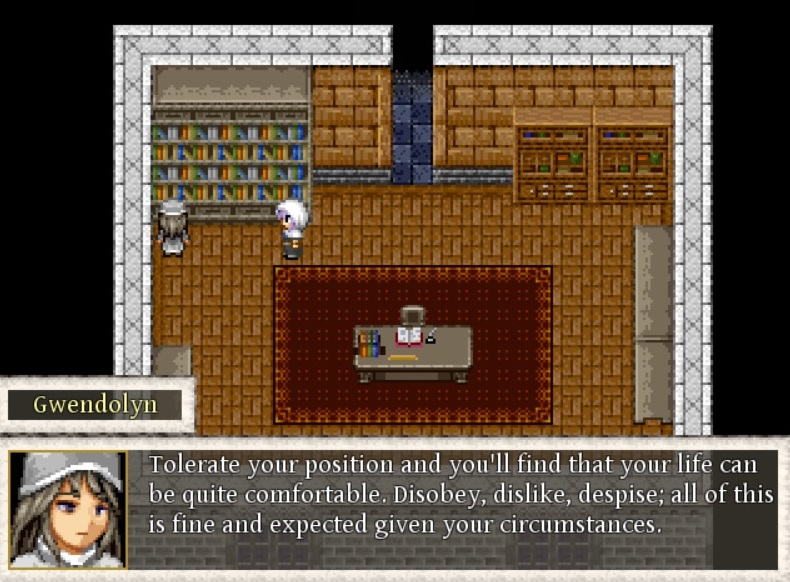 The entire game's atmosphere in one screenshot.


Gwendolyn is at the heart of this story, as she is the dominating party in this house (see what I did there?), even if she has two bratty violent daughters under her tutelage that add a chaotic element to the mix. She rules the game, she appears highly intelligent, and it is through her favor that you may live comfortably or not. She judges, helps, guides and admonishes you. She is also fully capable of torturing and killing people. The dynamic between her and the protagonist is what makes the game so compelling, as there are moments you find yourself genuinely praised, and moments where you wish you could just kill her to be rid of the situation you are in. She feels cold, but she utilizes pain for her own needs, rather than enjoying it just on its own. This is especially apparent as the two daughters who appear sadistic, impulsive and hold pure irrational hatred towards the protagonist are a stark contrast (which resonates well with our knowledge of the fairy tale). The two daughters are important as they keep your stay in the mansion dangerous, as they did not vow to keep your life safe.

This dynamic makes your stay feel like you are trying to tip-toe around danger and try to keep yourself alive while searching for an opportunity to escape or thwart your fate. You feel it in every step and one story path even shows signs of torture as you walk through the mansion. Although there is only one narrated ending, you feel each choice weighing on your shoulders.

The music is beyond excellent in the game - more than just the music itself, the pacing and use of it is on-point, highlighting changes in scenery and mood during story sequences and while exploring inside the mansion (mainly stepping outside). This made the introduction a real thrill to behold. There are classical pieces in new mixing, with a slightly forlorn melancholic undertone to them.
The writing too is wonderful, albeit a bit solemn. Piano's style always been has on the drier, more melancholic side (music included), and this works in his favor for this piece that relies so much on the oppressive atmosphere your protagonist works under. It relies on longer sentences, and the game tends to fill text boxes to the limit. This has the minor issue that a lot of the pacing reading may be lost due to this, and more emphasis could be given if more text boxes were used for the same amount of text. I find that a lot of skilled writers - particularly also those who do well with longer prose texts such as novels, like to fill text boxes up to the limits. This removes some of the pacing that could be added in a game, but this one does not overdo this and it remains a small nitpick rather than an issue.

Most issues can largely be contributed to the time frame it was made under. There are a number of typos that feel simply like leftovers and do not deter much from the quality of the writing, and as I mentioned, some of the pacing within the text boxes could have taken more time. Some words also lack spaces - particularly in the cooking and alchemy menu descriptions, with one description going over the text box length.
Additionally, some of the maps could be adjusted to make them more intuitive to traverse, or a bit smaller and better looking (I am looking at you endless kitchen-shelves). The end credits also do not work as intended, as pressing a key does NOT bring you back to the title (you can do so manually, however, as you can still open the menu in-game). 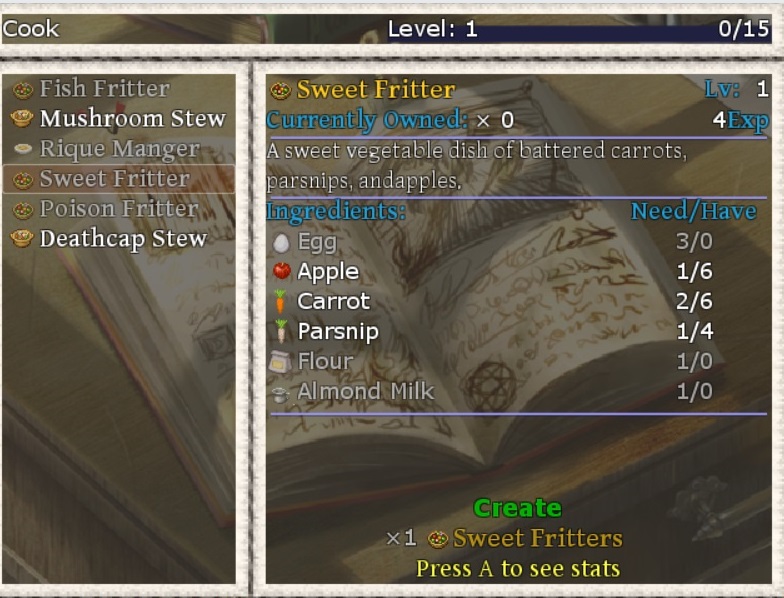 The only real issue could be that a lot of time is spent walking around and doing chores - with walking because you simply need to figure out where that one room was being a bit more tedious. However, this does add to the overall atmosphere, and as such is not completely wasted, it just adds up to be a bit much.

There are few complaints I have about this game. It tells a story and captures the essence of it, and the atmosphere perfectly. Narration and music are on-point and use piano's style to the fullest. Gameplay may drive off some people, and got a bit tedious. Despite this though, I thoroughly enjoyed my time with this game (and dreaded the first 10 minutes of walking around wondering what in the world this mansion is).
Anyone looking for a more subtle, tense horror atmosphere and a nice story should give it a try, though!

Close
04/05/2019 02:14 PM
I am happy I could play the result : )
Haha, I can see why you would feel that way. This literally could be expanded into long-spanning adventures (you could even introduce limited time mechanics), and many more interactions could be planned out. Still, it is a really good game showcasing what you are capable of, so I count it as a win.
Pages: 1