Lost... in an adventure

The Lost is an interesting game, still work in progress, anyway there's enough to play for a good while. But let's start:

The game starts with an experienced party that will serve as a tutorial as most skills will be locked until certain points. And then, after the first chapter, bam! You'll be another protagonist of a lower level in a period of time long before the first chapter, even if you will meet some characters you've already seen and visit places where you've already been. Nice idea! The first chapter is quite linear except for a couple of choices and sidequests, the second one is instead more open to exploration. Well, you have to explore and not stick only to the main quest, if you want to find all the content (and find all the companions) of this game. 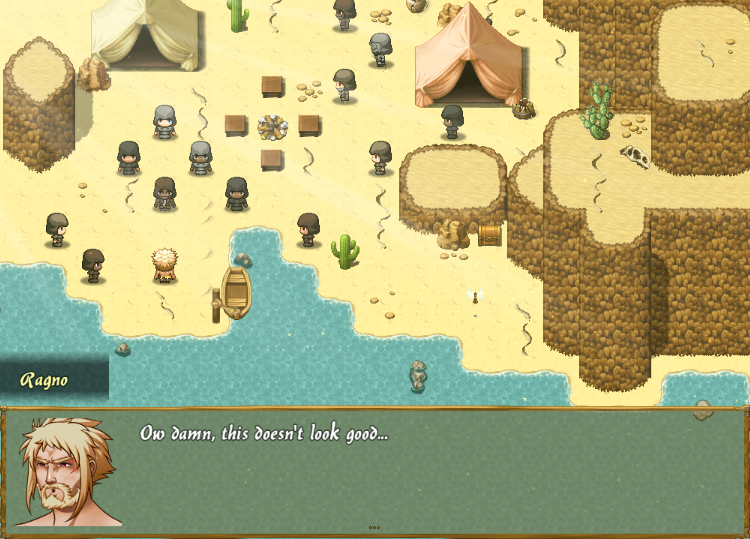 The Good
The first thing I immediately liked of this game was its particular setting: no more Fantasy or Techno-fantasy worlds, no Sci-fi or Horror setting. No. The Lost is set in a fascinating tribal setting of deserts and jungles. This is a peculiar choices as the characters and their classes are tied to this world: you will not find paladins and wizards, but tribal warriors and shamans (that interestingly thy are not limited to healing and cure, but the offensive spells are always "evil" and dangerous for them)
I like that during the game you can make some choices that results in different tasks with different difficulties (for example you can choose to fight everyone or use cunning and deception instead).

Let's speak of combat: you have a side view battleground where character use spells, battle abilities, weapon abilities (and I forgot the items too, some of which can really turn the tables), and do not forget the effect of positioning! This is very tactical but not too complicated, and after some time you will grasp the system rather easily. In the end I found the game quite easy despite choosing the medium difficulty, provided that I do not choose the hardest challenges, but more on this later.

Characters and their world are quite colorful (except in dungeons and during the dramatic prologue, of course due to the night-time too, but it match the drama of the situation). While I am not fond of the Rpgmaker MV super-deformed characters and clean, regular looking scenarios (compared to the more rough and more pixelated ones of Rmk2000/2003) I like the work that was done with charsets, portraits (hey remember that every character who wears a hood or helmet is a bad guy!) and mapping as they fit very well. There are also no differences of style and dimensions among the characters and their enemies in combat scenes (most enemies are humans, plus some beasts and really few supernatural beings), and that's a rare occurrence. I like that choice!

Dialogues are good too and character were interesting (especially Kaan and Kael even if the first seem the stereotypical "grumpy hot-head hero" and the second the comic relief. But hey they stood out as the most interesting members of the cast). 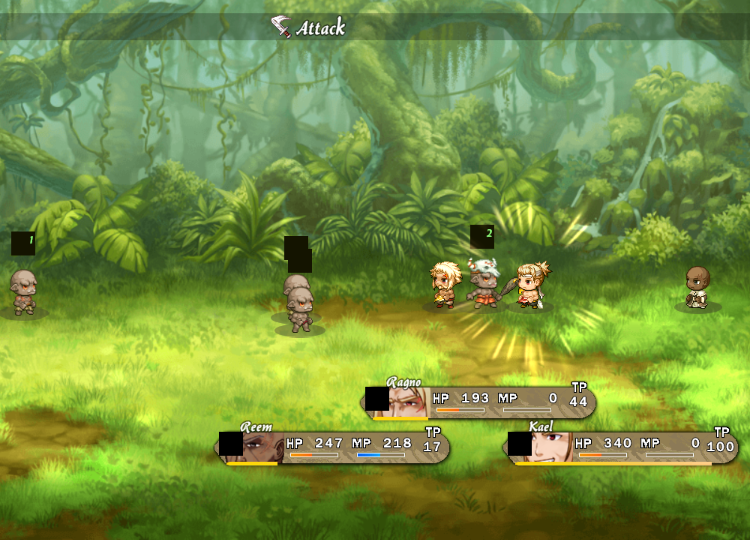 The Bad
I had some issues with this game but I don't know if it's a problem of the game: in combat there are black squares over the characters, instead of the icons, as you can see in the screen above. Also I had a lag spike on the section with the fanged tribesman.

Besides these I had a couple of problems with the game itself: being styled as an open-world rpg, when you start the part with the weaker party the game warns you not to adventure too far and find yourself against a too strong opposition... the problem is that stronger opponents are present in a subquest near the start of that part, and you have three combats in a row. It's true that the game saves immediately before that but I was almost able to win in the beginning... at least the first two combats.

Another problem in another optional subquest was on the first part of the game: here you have a strong party but, being the beginning and the tutorial, most abilities are unlocked. The problem is that the quest is available before some skills, like the use of spells, are enabled, so you have to be careful to reach a certain point before attempting that quest as you are locked inside a cave and you probably won't be able to win without spells (or maybe you can by using the powerful damaging items like the burning crystals, but I seldom did that since I like the combat). I'd prefer had them available from the start as they are unlocked after quite a bit of combats.
I also found a typo ("familair" in the first dungeon) but I don't recall other errors, so it's ok.

A last thing, but maybe it's my problem, I found not every character useful: Jamal is good, but died more times than Krillin in Dragonball... Kael was funny but rather useless, Mikatu instead was better at than him at avoiding attacks. Except for the occasional critical hit they did less damage than the shaman in combat, anyway it's ok. Every player can probably find his playstyle and maybe use well these characters I was not fond of.

Final Thoughs
I had a lot fun exploring the world of the Lost as it's large and there is a lot to do. I liked the little details (such as the world that changes as you complete minor quests like building a well, some stairs and repairing the village). Combat is really fun for me (well, a bit less when those fanatics start to heal and resurrect fallen friends, but ok!) and difficulty is medium.

As the game stands for me it's a solid 3,5 stars but since the main story is not completed yet I wait as it could be better or worse, who knows? By the way I explored every corner of the map and I did every subquest I could. I admit that I was intrigued by the incomplete locations and the parts of the setting that have still o be finished as this tribal-Fantasy is something new.

Recommended especially for the originality of the settig and the good combat system. 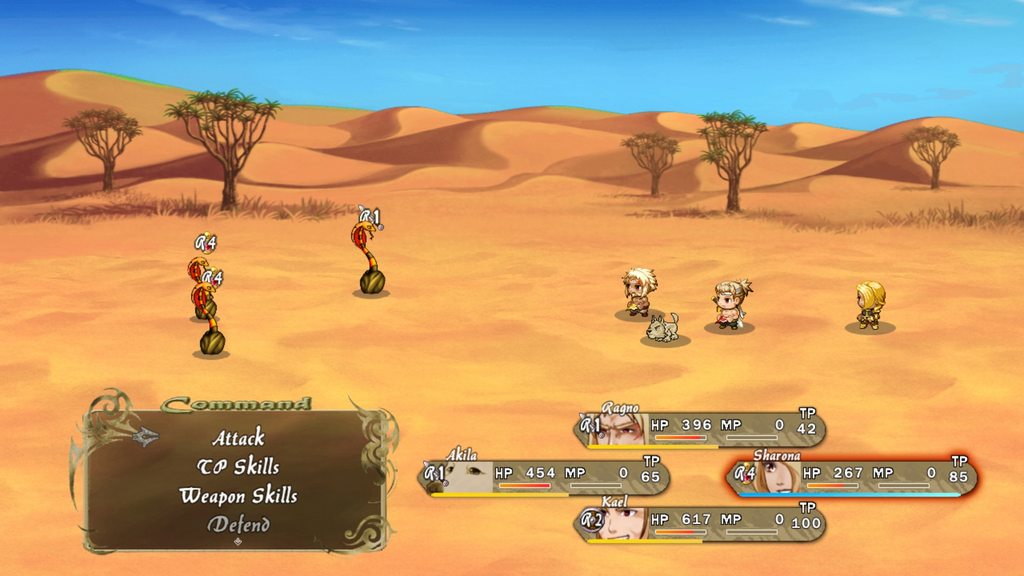 I think it's a download error and that's a big shame as you will have seen those black squares on every combat fight...

You are indeed correct about some characters feeling useless to certain play styles. I have seen with the people playing the game that they all pick their characters that fit their playstyles the best as you mentioned.

I personally like the combination Ragno(damage)- Kael(tank) - Persmerga(damage) - Mikatu (support skills+items). I also change it around a lot to try and balance it out better. I think you didn't use the defend command a lot with the Gaurdian class (the ones in Row 2 (might be a bit hard too as you didn't see any icons)).

Thanks for those really nice final thoughts! It really shows me the strong points of the game.

author=DutchPowerCreations
Thank you so much for you high score of 3 1/2 stars for V1.5.3 of this demo! I regret that there where black squares and the icons didn't show properly. It should look like this;

High score because I did not noticed errors, or problems, balance was good, maybe on the easy side since I always try to spare the resources for harder fights (the Fallen was the hardest one of course)

I do not know maybe the next version will display it correctly by the way I noticed that I was not the only one with that problem. I was able to understand anyway what the number meant (for example when the fanatic leader use his power to use the allies as human shields)

author=DutchPowerCreations
You are indeed correct about some characters feeling useless to certain play styles. I have seen with the people playing the game that they all pick their characters that fit their playstyles the best as you mentioned.
I personally like the combination Ragno(damage)- Kael(tank) - Persmerga(damage) - Mikatu (support skills+items).

My favourite team was Ragno + Mikatu + Reem + Kael/Akila/Sayid/Persmerga(I always need a healer, just in case, and he did more damage than Mikatu and Kael when healing wasn't necessary!)
Pages: 1