0 reviews
Crawl your way out of Hell and emerge into the world of the living as the almighty DEMON LORD. The plucky heroes are out of luck, as this time YOU are the final boss.

No proper final boss has a single puny form. Collect forms from your fallen enemies and combine them to your liking to increase your survivability as you ascend the dreaded White Tower, the looming structure that connects Hell and the land of the living.

Be bold. Be brave. Be THE FINAL BOSS.

A few days ago, I hit a major development milestone: This is Not My Final Form can now be played from start to end. It has an actual ending and everything! However, in its current state the game is an extremely bare bones dungeon crawler with very little in the way of actual story. That's because, by design, most of the story scenes happen in optional content. So right now, the game offers the experience you would get if you just raced to the ending ignoring all of the side stuff: A valid way to play, but not the most fulfilling. The story bits that you unlock by walking off the beaten path do more than provide context, some are required viewing if you want to unlock the TRUE ENDING PATH/<ominous capslock>.

So... Look forward to that! Sometime next year! 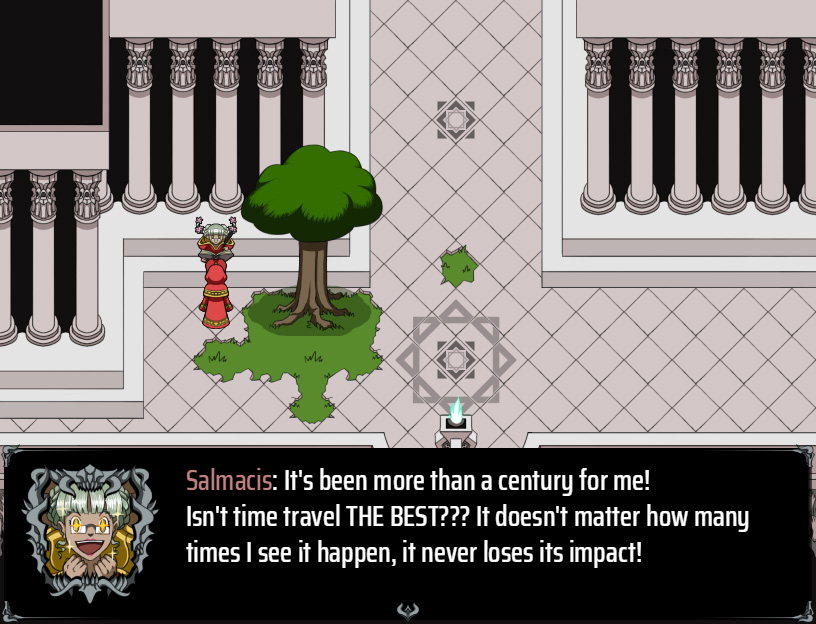 Let us all time travel to the future, away from 2020.
Special attack: Have at you. Shatter wine glass on enemy's face for one million damage

I recycled this map from a previous project, but SSSSSSSSSSH, don't tell anyone.

I do hope that we will actually have more HP than the enemy.... beeing a annoying damage sponge with mean attacks is what makes a nice boss.... No good boss fight under 15minutes.... nah just kidding about the last part but I still have hope for that... =P
Anyways I hope you get enemies to use a sort of strategy....(like a change of attacks if they use a buff on themselves, use a buff/heal after x turns, or maybe even a different attack pattern based on the endboss level.... MV is rather free with its costumisation I am pretty sure you can also make a trigger if a certain switch is on or off.... heck there are a lot of options) because if the gameplay is the same as playing as a hero it would be boring and kinda defeat the point of beeing the last boss. In most cases Umbral Souls was still awesome. If you cant find a stat limit break script maybe work with smaller numbers and costumize the damage calculation instead of using the pre done ones. Maybe even find ways to block certain skills until you reach a certain HP point or MP point (like mana apsorption if mana hits 50%) in the worst case you could add stats that grant skills that you add after X health is lost in a fight. Maybe there are even plugins for that...

Well I do wish you luck with your endeavor. Balancing a game playing as the boss will be a pain in the butt.

But I think the idea of having different forms is nice... will I be able to switch them during combat as well? That would make for an interesting mechanic.
Erilex

Close
10/27/2018 06:56 PM
I'm glad the game has sparked your interest! I will elaborate further on how battles work on an upcoming blog post, but don't expect a huge departure from the regular MV combat system. You CAN switch between forms in battle, though. It is actually one of the game's most important mechanics. More info on that to come soon!
dasgibtesnet
0

Close
10/27/2018 07:16 PM
Hm changing forms midcombat sounds interesting.... I assume it alters your skillset and HP/MP as well? If yes that would make things interesting and add an interesting strategy element.

Also I did a quick google search for something like base parameter control and adjusting limits and came to yanfly's page
http://yanfly.moe/yep/ (his terms of use say free for both commercial and not commercial games but you can read them yourself =P)
Just brows his plugins they may be helpful if you want to make a boss with more than 9999 HP and have more control over stat growth. (I mean come on what endboss has less than..... alright I could name a few but thats besides the point... *cough*)

Anyways i am off for now... yet again good luck.
Mireia

Close
10/28/2018 12:16 AM
I played the IGMC version and really enjoyed both the premise and the aesthetic, so I'm really excited to hear this game is getting an expansion.
Erilex

author=Mireia
I played the IGMC version and really enjoyed both the premise and the aesthetic, so I'm really excited to hear this game is getting an expansion.

Thank you, I'm glad you enjoyed it! Hopefully that means you'll enjoy the intended experience even more!
WheelmanZero

author=StormCrow
Super fascinating premise! If only there weren't so many great games out there for FREE...

One should be ready to pay for something great.... dont misunderstand me I would be happy if it would be available for free later, but monetary gains motivates a creator much more than mere appreciation by his fans.... and it is much more likely to be finished.

(Goes back into hiding.)
Sgt M

author=StormCrow
Super fascinating premise! If only there weren't so many great games out there for FREE...

"How dare people charge for things when people are making things for free" is destructive rhetoric that hurts free and commercial developers alike.
WheelmanZero

Would you look at that, the rain has made a blog post sprout upon the gamepage's fertile soil.
Archeia_Nessiah

Thanks! And yes, I should probably do that. Do you know any good, free for commercial use fonts that look good with MV? I'm currently browsing 1001fonts in search of a decent one, but no luck so far.
Archeia_Nessiah

Thanks! And yes, I should probably do that. Do you know any good, free for commercial use fonts that look good with MV? I'm currently browsing 1001fonts in search of a decent one, but no luck so far.

The game looks fantastic, the art style is at your best and the project overall is very promising.
Along with the thing that have been said, yes the font looks generic but i don't found it that hurtful. If only i had to put a snag to make a constructive criticism I would say that the gauge bars of HP, MP and WP are a bit soulless while the rest of the game's art overflow with personality.

So, that being said you just have a new subscriber, I will stay tuned to the news and read every blog entry!

OFFTOPIC: Funny enough I just recently played and completed (around 3h took me) Doble Filo RPGmXP classic demo that i still had in and old pendrive, along other Hellsoft classics, and I found it both awesome and cringy (in a good way). After stalking a bit about your persona and discovered that you are making a new game my mind just blown!
Ado13

author=Ado13
Will this be on Steam?

Close
03/27/2019 11:22 PM
Ok, on that banner image with the left face, how do you not see a face with the two spikes as eyes and the actual eye as a mouth? I literally only saw that until just now when I noticed there's an actual normal face there.

Anyway, this is pretty cool, will keep an eye on it
DecentTreatment