Story: This is based on an old Japanese fairytale about a young artist who just wanted to draw cats. He was studying to be a priest when the priest of the temple told him he should be an artist. Of course, the boy's father wouldn't understand. The father had sent the boy to the temple in order to stop his drawing. The boy, deciding to leave the church, stopped at an abandoned temple overnight. Unfortunately, a monster lurked nearby. This was made for the Halloween Twisted Fairy Tale jam event. 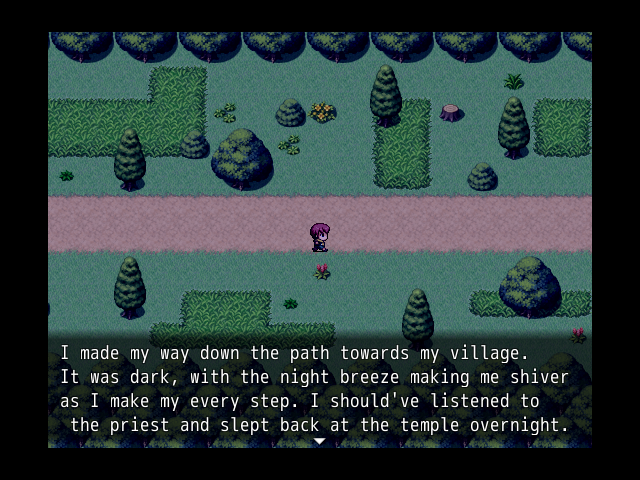 "I walk a lonely road, the only one that I have ever known. I don't know where it goes, but it's home to me and I walk alone."


Writing: The writing in the game is very simple and very to the point. It tells the story from the point of view of a young boy who likes to draw cats on the wall and it doesn't try to do anything else. I will admit that the scene where he finds the crayons is a bit melodramatic but that is the only standout example of overwriting that I can think of. The game is extremely short so there isn't a lot to cover here. Which is good in this case because it means there's little chance to mess up, and in writing, this dev doesn't mess up at all. Well done! This is a perfect example of less is more. 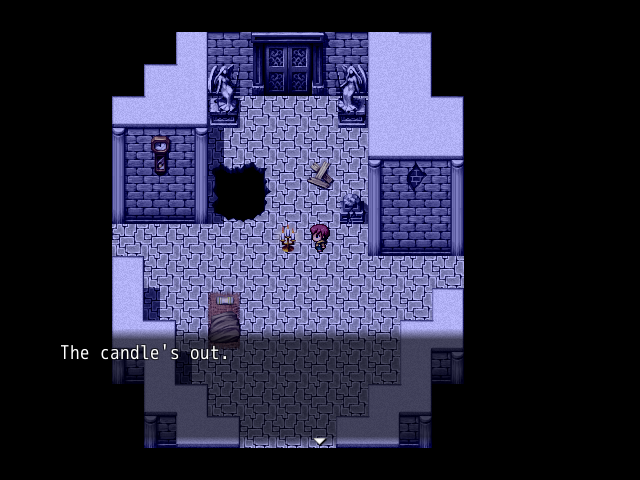 
Gameplay: The gameplay is very simple. It's basic exploration, item seeking and item using. There are a few glitches that I will get into in a bit. There isn't much of anything to unpack. You start with a cutscene, and find what you need to find in the temple. The game has a specific order to it. You have to make your bed and go to bed before you have the chance to find the crayons, but this leads us to the glitches. As you saw in the above screencap, broken switches. Two of these broken switches are minor. You can find the bed sheets before and after you go to bed and you can get infinite keys from the rubble, as an example. However, if you unlock the door and find the mailman before finding the crayons, you can't find the crayons, meaning if you've found the mailman, you've broken the third ending. I spent about half an hour trying to figure out how to draw the cats. I had to start the game over. So, once the monster appears, you have to run from it, leading to the second ending, or if you're not fast enough, a game over. 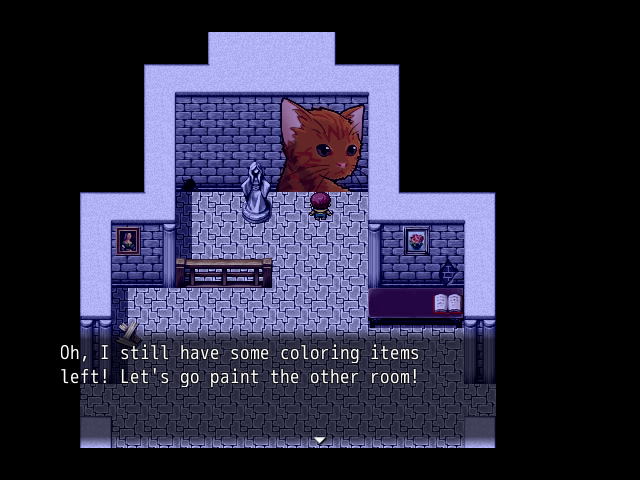 The Church of the LOLCat is really starting to spread.


Graphics: This game uses the RTP, with the exception of some cat art, which appears to have been from a pack that is made to match RTP.

Sound:As with the rest of the game, it is all RTP, and it makes some moderate use of the cat and monster sound effects. The game is presented rather well for what it is.

Conclusion: Being only a 10 to 15 play time, having three endings, and being fairly charming, I do recommend you at least give it a look. Though the game is very basically presented, the fairy tale itself is quite memorable. Give it a go!