Four years after its inception, Indie Game Maker Contest continues to be a prolific birthplace of a countless number of terrific-sounding indie game titles — and each year I as a player end up facing the same disappointment, not finding many of those games nearly as enjoyable as I’d hope. And I honestly don’t know what to expect from this year’s entries — but to save myself from being disillusioned right off the bat, I decided to start with a short and rather unremarkable-looking game called Dolorific: A House by some guy named Frogge. It seemed like a fairly typical RPG Maker horror game, but I figured that in the worst case I would only waste about 15 minutes of my life playing it.

I really didn't expect much going into Dolorific — it being a Frogge game and all — but I was honestly pleasantly surprised. Dolorific, as it turns out, is anything but a typical RPG Maker horror game. Many things you would normally find in one are absent here — no jump scares, chase sequences, or even dialogue. Dolorific adopts a more surreal, mind screw kind of aesthetic. The game continually tries to mess with the player’s brain each step of the way, and doesn’t hesitate to go all out with its mind-bending tricks and illusions. 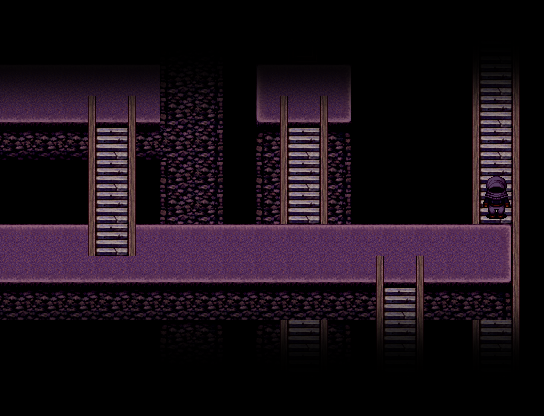 There’s some clever software/code manipulation involved that is rarely seen in not only horror, but RPG Maker games in general — the only other example I can name off the top of my head that does this kind of thing is Oneshot. The game messes around with various features and properties of its engine, such as window size, menus, message boxes and so on. All of that ties in nicely with the puzzles that make up most of Dolorific’s gameplay. Most of the puzzles require a bit of thinking outside the box in order to solve them — I particularly liked the staircase puzzle, which plays around with the concept of impossible objects. That said, none of the puzzles are very challenging, and not all of them are terribly creative — some are actually very basic and are there pretty much as a filler, sometimes barely requiring any thinking at all. 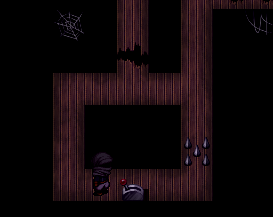 Every RPG Maker game has to have one of these


One area where Dolorific doesn’t depart much from the traditional RPG Maker horror genre is the story. It is mostly presented through the fragments the main character’s memories, scattered throughout the house in the form of illusions; dialogue, as I mentioned before, is absent. It’s all fairly vague and cryptic, but from what I gather the story is about a happy relationship going sour and evolving into some sort of love triangle. Honestly, I didn’t care much about it, nor did I think the game needed it. In fact, I felt like the game didn’t even need to be a horror game at all, and would’ve been significantly better as an abstract game without a story — but that’s probably just a matter of taste.

In terms of presentation and atmosphere, Dolorific also doesn’t feel too different from the standard RPG Maker horror experience. It isn’t very scary, but there’s a certain horrific and unsettling vibe present throughout the game. The audio and graphic resources are all either default or default-style. The mapping isn’t particularly eye-catching, but it serves its purpose very well. A prevalent mechanic in the game is that sometimes the screen size will shrink, effectively limiting the player’s field of view to just a couple of tiles around the character, which can potentially lead to a lot of confusion — but thankfully, the levels are kept simple, and the way they’re designed makes navigating around them very intuitive. My only gripe is that sometimes it’s little too dark, making some of the puzzles a tad annoying to work through (specifically the final puzzle). 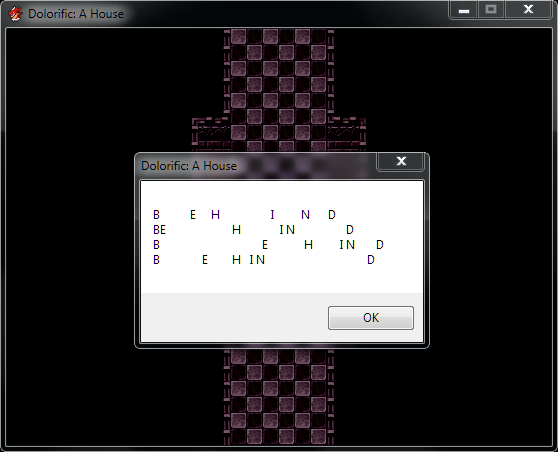 
The music, taken from JDB's Nightmares Music Pack, helps to set a creepy and melancholic atmosphere throughout the game. There are minor issues with certain parts where the music is a bit too jumpy, and there would be occasional random loud noises, even though nothing is really happening on the screen, which feels a bit weird. Otherwise, the music does its job fairly well.

Overall, I was decently impressed with Dolorific. I'm sure there are many better games from this year's IGMC that will claim all the top spots, but for what it is I think Dolorific is a terrific effort from Frogge. The game is not very long, and it isn’t groundbreaking by any means, but it can be an interesting experience and a fun way to spend 15 minutes of your free time.

Close
12/10/2018 03:08 PM
Thanks so much for this review, random dude named Tunger. I’m so happy to read such positive emotions coming from a stranger like you <3 This was a really good review. I completely agree with you on the few negative things you pointed out the particular. The story was absolutely just a filler and the puzzles were too simple. Looking back the game definetly should not have been as dark either. I’m glad this was a pleasant surprise though!
Cap_H