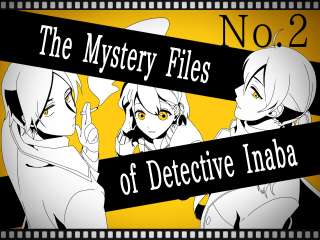 This is going to be a bit of a shorter review given that in the *checks watch* three years since this was released and I made a note to play it, Frogge wrote up a review that'll probably be more informative anyway (https://rpgmaker.net/games/10836/reviews/6339/).


Basics
The Mystery Files of Detective Inaba, Case #2 (hereby abbreviated as TMFDIC2) is a classic sleuthing game about a classic parlor mystery. It features an ensemble cast with the player controlling the detective and his cohort as they interview witnesses, search crime scenes, and solve the odd puzzle. The gameplay works fine -- there are a couple of cool investigation modes that break up the same-ness, and cool features like a map, summary notes, and inventory all make it easy to play (and were very useful as I ended up playing in 30m chunks over a month). There's nothing out of place for the genre.


Story
...but that's sort of the trouble with TMFDIC2, there's nothing out of place for the genre and it mostly relies on a stock cast of mystery characters, motives, and plot devices. There's nothing here that anyone who's ready any detective fiction hasn't seen several times before.

There aren't any real twists. The titular detective Inaba doesn't have a personality. The writing is passable most places but really bad when it comes to Inaba and his assistant Nina (where I guess what are attempts at friendly banter come off as offtopic and meanspirited barbs). No character ever really changes or develops. The bright spot is the dynamic between the detective-team doctor and his wife, the police inspector who shows up halfway through the story. That's fun, and pretty novel. It's not that TMFDIC2 story is a weak point, per se, it's just there's no reason to play the game for its story. And given it's a story game, that's kind of a big deal.

Mechanically, concerning the game's mysteries:
Show
The raincoat/blood thing is kind of clever and is the focal mystery. It's 100% solvable and I was happy I was able to figure it (and the killer) out. The other two mysteries (ID of the amanuensis and the ID of the poisoner) are based on tongueslips that amount to nothing and are only deducible by examining motives. The game gave me a C for detective cleverness, and I'll likewise give the game itself a C for detective cleverness.

Presentation
For the most part, the game is pretty slick. It takes advantage of some of the Wolf features, mostly around UI polish -- and the UI works and looks good as a result. Sound is stock jazz (fine). Mapping is refmap (fine).

Art is, uh, a mixed bag. The UI and title art is great, but then everything else looks like it comes from multiple artists or different games entirely. Some characters have strong anime-style linework, some have ten zillion gradients on them, some are all flats, some have normal proportions, some are pinheads, etc. The butler, Ishihara, and the eldest son, Tsubame, are very hard to look at. Not really sure what happened here.


Verdict
"Case file" is the operative phrase in the jargon that is this game's title. There's nothing wrong with it, per se, but it feels like another entry without really having a character of its own. For players into mystery games, there isn't anything memorable to look at here, and for those who don't like mystery games... why would they play this in the first place?