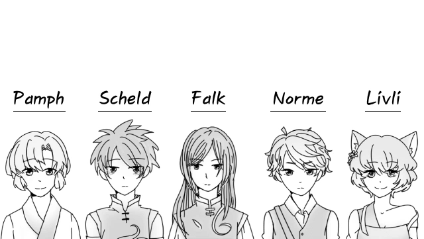 "RPS Mimicry" is a short game centered around a variant of Rock–paper–scissors that I've never run into before, but I was never a big fan of RocRock–paper–scissors in the first place. In fact, the most enjoyment I ever got out of watching someone use the symbol for scissors is when Goku used it to poke Master Roshi in the eyes at the World Martial Arts Tounament in "Dragonball". In a way, I'm not sure anyone really enjoys playing Rock–paper–scissors. After all, you usually play this game to decide who goes first in a game of cards or something. And even if people did enjoy playing Rock–paper–scissors for the sake of it. I imagine the bulk of them prefer to play against other sentient beings rather than a soulless machine. And if I really wanted to play Rock–paper–scissors for 10 to 20 minutes at a time. I could always go play "Dinosaur King" for the Nintendo DS or play "Fate/Extra" for the PSP. And at least those games have an actual story attached to them.

In the words of the developer this game features gameplay that is entirely devoid of a plot. Though, I suppose you can assume the four matches you play against the other selectable characters is meant to determine whose the Rock–paper–scissors champion amongst you. Or you can assume your playing against them at the world championship of Rock–paper–scissors in the glitter dome. At the end of the day the game really doens't have a plot, but your more than free to make one up for it.

In this variant of Rock–paper–scissors you need to beat your opponent the traditional way and then get him or her to throw out the same symbol as you in order to score a point. Score two points and you win the current set and can move on to your next opponent, but if your opponent manages to score two points first than you'll need to either quit out to the main menu or replay your current opponent. After all, this game does provide the player with an infinite number of do overs. As a result, you can easily beat this game if you refuse to give up.

In a way I feel bit old fashioned at the moment, but I really like the simple black and white look of this game. After all, there isn't anything complicated about Rock–paper–scissors when you get down to it. In other words, a simple game deserves a simple paint job.

As you can probably imagine a game this simple and short has a rahter limited soundtrack. After all, you spend all of your time either winning or losing at Rock–paper–scissors. And normally I wouldn't hold that against a game this short, but I absolutely loathe the sound that pops up when you finish a match in this game and scratch my head at the fact that this game doesn't include a background beat of some kind while showing the title card for the next match up.

"RPS Mimicry" is a short a game whose existence baffles me. In fact, I seriously wonder if this game was intended to be a mini-game in a much larger project at one point. I suppose it really doesn't matter at this point though. After all, I can only judge the game I have and not the game I want. That being said, I'd recommend against playing this game unless your a die hard fan of Rock–paper–scissors and have to try every variant out there.