Story: Humanity once peacefully lived with demons, until the demon lord had a change of heart and sent his minions to take over. Now they rule cruelly. You play an unnamed hero who's teacher and best friend have been taken by the demons, so you set out on a quest along with two others to rescue them. Along the way, you see the cruelty humanity suffers at the hands of the demons and it is up to you to defeat the demon lord's three generals, and the demon lord himself, and finally free the world from this madness. 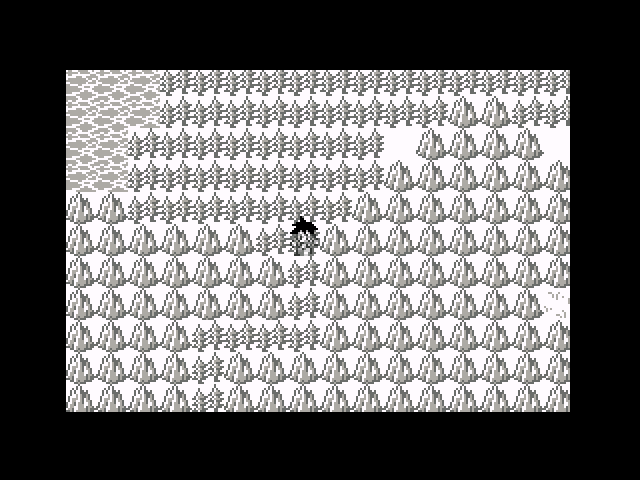 Are they mountains or trees or both?


Writing: Very simple. The game seems to be modeled on old NES classics such as Dragon Warrior. Still, the writing, story, and plot is a bit more involved than that game was. There were occasions in which grammar got a bit lost, such as during the conversation with the ship owner, but otherwise, there's nothing particularly wrong with the technical aspects of the writing and with only those few exceptions, everything was clear and easy to understand. There's not really a whole lot here to talk about. 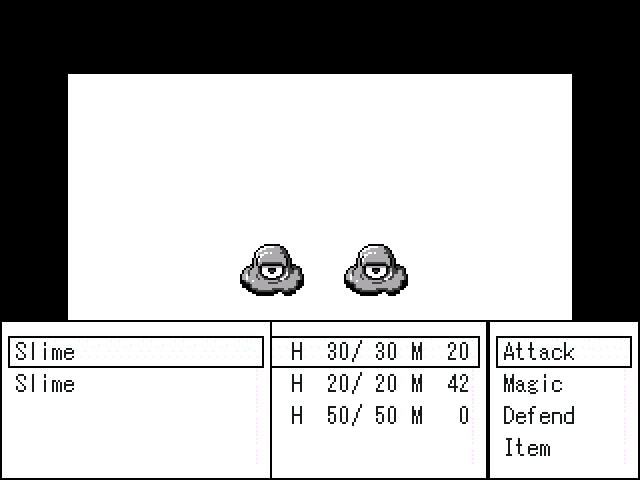 
Gameplay: The game is essentially the same as those classic NES games. You are sent on a mission, start with gold, gather a party and start wandering the world map. You have five party members from which you may choose two. My choices for my play through was Reina and Maya. Upon leaving the town, I discovered, to my chagrin, that the gameplay revolved around random encounters and grinding. Now, people who know me know that I have no love of random encounters, but I will say that there are plenty of games in which I actually enjoy them. This is on the fence. The encounters themselves are a bit on the easy side, which makes their obnoxious persistence tolerable, but the rate feels very high to the extent that I sometimes feel like I can only go five steps before hitting an encounter. I'm pretty sure I've never managed to make it more than twenty steps. 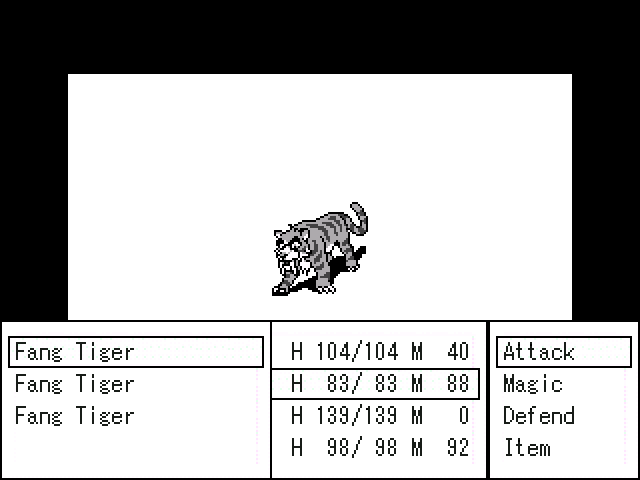 Yes, that is only one tiger on the screen. Yes, that is three tigers attacking. They're all in the same spot.
This happens quite often.


Now, the gamepage says it's completed, but this game has a very distinct "unfinished" quality to it. In most encounters, the developer never bothers to move the battlers into a position so that you can see all of them, so that you have three, four, sometimes five battlers all in the exact same spot. This didn't confuse me at first because I saw the enemies listed in the window, and immediately knew there were three there. I simply thought the other two were invisible, but nope, they are all in the same spot. That this happens so often through so many encounters across the game makes it feel like the developer just didn't care. There is a particular group of creatures though that seriously need to be addressed: the Mothmen. They have an area of effect stun spell. One of the REs I hit had four mothmen, and I couldn't escape. They also incessantly cast that spell. I was too strong for them to kill and it was eight minutes before I got a turn. This is unacceptable. No spell like that should ever exist for a monster, and this is exactly why. AOE stun spells are not something that should ever be given to monsters. 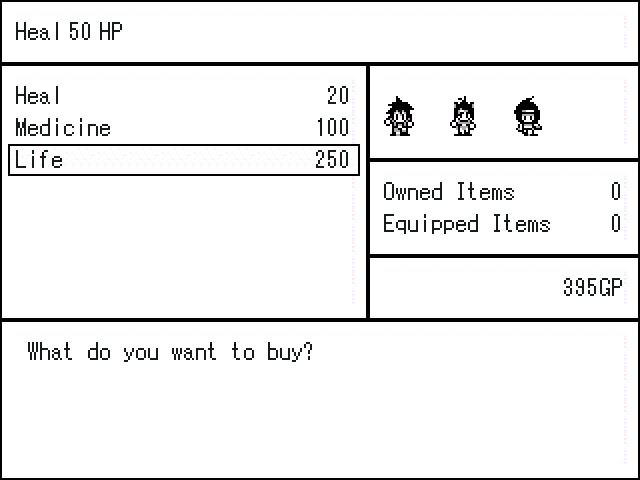 
The Life potion being a copy of the heal potion is, thus far, the only database error I've found. Thankfully, Life DOES actually resurrect fallen party members. It is LYING. It does not restore 50 HP. However, in addition to these unnecessary glitches that can be totally blamed on a simple failure to go through the database and make sure everything was right, there are maps that are complete, but devoid of any life. They're just there. Empty restaurants, houses, and whatnot. Maps that serve no purpose that the developer hooked up so you can explore them and never put in anything in them to make them worth exploring.

Another issue pops up with the "guest" party members. That you can't control them coupled with the fact that the dev has offered no way of restoring MP that I can find except for sleeping in inns, brings up a major issue. The guest party members exclusively use their most powerful attack until they run out of MP, at which point, they can only use their basic attack, which almost never hits, in spite of the fact that they tend to be a higher level than your party and when they do hit, they do less than half the damage as your party. These characters are essentially useless after a few encounters, and there's no reason for them to be in the party. There needs to be a way to either replenish MP, or just let us control the guest party members. My final gameplay gripe is that the dungeon maps are very large, and have a number of empty dead ends, meaning you're walking for quite awhile just to find a dead end that has absolutely nothing in it, and you're doing this constantly.

Beyond these gripes, though, the game really feels like old school, early eighties JRPGs. The encounter rate is for a game that was designed to be super grindy, but you could actually make it through this game running from about half of these battles. It feels like the game was designed around the principle of building levels. I consider the game to be an overtly fun experience even though I don't actually have a lot that is good to say about it. The fights are easy but numerous, the story is charming, and it really all balances out to make the game actually kind of fun in spite of its myriad problems. 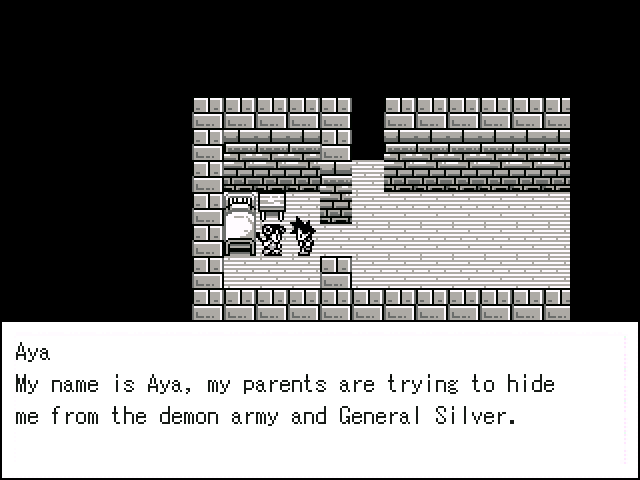 Oh, you're the great warrior decimating his troops! Cool story, sis. You're all of twelve, right?


Graphics: Clearly Gameboy style graphics. I really like the look and aesthetic of this, but there are a few minor gripes. If you'll notice in the first screen cap, the trees and mountains, when mapped together, make it difficult to the distinguish the two so that path going through wasn't obvious at first. It would help to make the trees look a bit more different than the mountains, or perhaps make one of them much darker so there's a distinct difference. This is the only complaint I have here. Otherwise, it looks really fantastic. 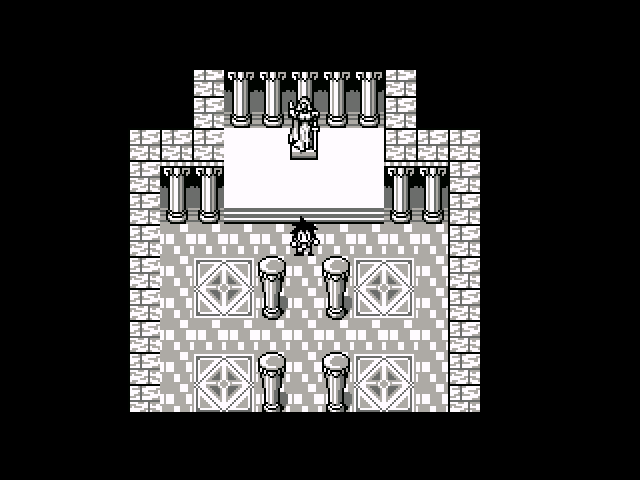 This map has my favorite music, so far.


Sound: Much of the sound effects seem like they come out of Dragon Warrior, though I don't know if they're rips or merely nice imitations. The music, I have no idea where it comes from, but it all has the early 80s 8-bit MIDI sound to it. It really does go perfect with the game.

Conclusion: It has more flaws than features, but I feel like it's good nonetheless, and for nostalgia's sake, fans of older games will probably enjoy it. Fortunately, the types of glitches found in this game are of the variety that can be fun to look for. The enemy overlapping is a fairly quirky example, and glitches can certainly fuel that nostalgia as older games were known for them. If you're looking for a nostalgia trip, then give this one a go.

If you played Final Fantasy Legend 1 or 2, the way the monsters were displayed were exactly how it showed on this game, but they could only fit one person, so they condensed it into 3 groups of one enemy in the same screen. I hope I explained it properly, but if you need an example, just look up LP's of FFLegend 1 and 2 and you'll see what I mean.

But otherwise, a great read. I immediately went and fixed that Life potion description mistake and will update the game shortly. Thanks for the review mate! XD
Dyhalto 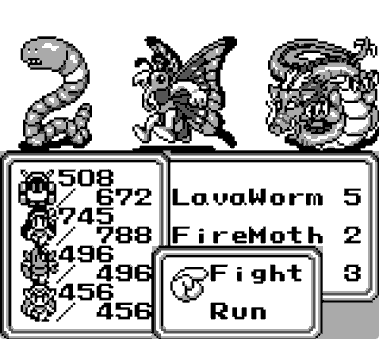 psy's SaGa 4 : Masters of the Demon World did the same thing, although his looked more organic since it wasn't confined to the restrictions of RPG Maker 2k.
J-Man

Close
02/06/2019 07:40 PM
Well, I'm shocked it was even noticed in the first place, haha. Oh well, it was a fun little distraction I wanted to make that was reminiscent of old Game Boy games. I can respect your decision about how the monster parties are like, and believe me it can get stressful even in the actual FFLegend games.

When you're dealing with enemies that comes in large groups like that, a lot of them are capable of 2-3 shotting your allies, making those games VERY luck based. At least it felt that way to me, I wanted to try and loosen that nonsense with the battles not capable of cheaping you out.

Oh, I looked into that issue with the Mothman enemy you mentioned as well, and I tweaked the success rate of the attack and reduced how often the Mothman would use it. :D

EDIT: Now I get it, I've been victimized by the dreaded review pirates! YOU MONSTERS!!! D:<
J-Man