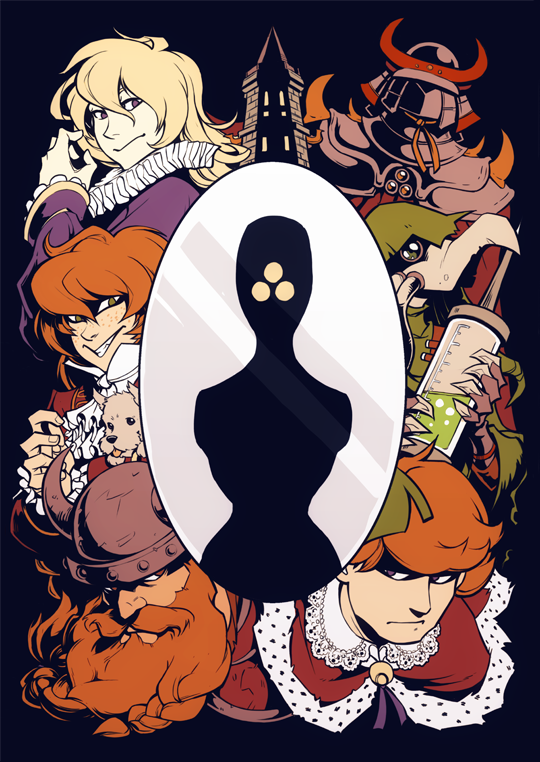 "It's basically Dragon Quest meets depression, but with the choice to make a party of dogs." -Liberty.


Check out the Steam Page!

Lord Zadigan has summoned the dreaded Tower of Venaitura from the depths of the Dark World of Radunga and is using it to spread his evil influence across the the land! He has dispatched his finest combatants, the Six Purveyors of Doom, to retrieve the only six artifacts capable of stopping him.

Summon four Champions from the Realm of Heroes and lead them across Tsufana on a journey to thwart the malevolent Lord of Monsterkind. Shall you banish Zadigan and his vile conjurings back to Radunga in a bid to restore peace to the world forevermore? Or will the forces of darkness at long last overthrow the realm of light?

In this harrowing tale of Good VS Evil, you'll assemble a party of Four Champions from TWELVE available Character Classes and lead them on an arduous journey to topple Lord Zadigan's forces. You'll conquer six distinct lands wrought with monsters and other nefarious ne'er-do-wells as you aim to destroy the Six Purveyors of Doom and end the misery brought in their wake.

As it has always been, my latest project has taken a page from Dragon Quest/Warrior's book and focuses on the journey more so than the destination. Each continent and island you'll visit while traversing the vast world of Tsufana is complete with its own self-contained tale involving one of Zadigan's Purveyors of Doom and a Heavenly Artifact.

"Venaitura" builds heavily upon what I attempted with both "Dragon Fantasy 2" and "Dragon Fantasy: Heroes of Tsufana". Unlike its predecessors however, you're given free reign over how to assemble your party; the "Hero" class is no longer mandatory! There's also slightly more focus on the story and character interaction/dialogue than my other "retro/classic" projects, but the adventure and exploration will (as always) be at the forefront.

We've got a Discord! Come chat with us and get up-to-date information regarding Venaitura's progress (and perhaps other juicy details!) Click on the image below to visit our server!

Review by "Erato" on Steam

"I had a great time with this game! It took me a while to warm up to it, but as I went on and the game showed more of its hand, it started to come into its own, and I became invested in the world, its characters, and its uniquely melancholy atmosphere. As a big fan of turn-based combat, I really enjoyed how fully I was allowed to exploit status effects both in random encounters and in boss battles; even powerful turn-skippers like Stun worked on major bosses. A lot of games avoid this for fear of making bosses too easy, but it's fun to use your knowledge of your party's particular strengths to completely dominate a boss from time to time, and Venaitura is firm about varying enemy resistances so I don't get overreliant on my favorite toys. I liked that my Barbarian could decrease a boss's ATK to the point where its physical attacks were harmless - but I loved that it never trivialized them, because bosses always had more tricks up their sleeve. It's a balance that allowed every member of my party (Barbarian, Druid, Companion, Champion) to shine in different contexts and in ways that other RPGs rarely let me.

My biggest issue with the game was that I found it a bit overinflated with "stuff"; there's a high density of random encounters, a huge number of NPCs with a ton to say, an enormous number of containers in each area to check for treasure, and an endless bounty of new equipment to find. I can appreciate the generosity in this volume of content, but when your plate's too full, eating can become a chore, and so sometimes I would get exhausted with a town or dungeon before I was "done" with it. I often wished for more time within arcs to breathe and digest. Some of my favorite moments were when I was allowed to move through an area without needing to do anything more than take it in - especially since the spritework is so lush and vivid and the maps so gorgeously designed. Similarly, while I loved customizing my party, the complexity of skills and equipment was a bit overwhelming at first before I had any context for evaluating the multiple secondary effects on each spell/weapon/armor. Some people enjoy having tons to see and do and find, but I think I would have had a more even experience if I spent less time processing noise and more focusing on the core of the game.

Fortunately, that core was more than strong enough to keep me invested through any low points. In the end, Venaitura is a gorgeous, playful, and lovingly made adventure full of fantastic ideas, with meaty boss battles and surprisingly robust and moody storytelling. Even though it resembles early Dragon Quest, it brings a ton of its own ideas to the table and feels distinctly modern: it offers a smoother, fairer, and more transparent experience of RPG combat than any NES game I've played, and its commitment to party customization creates just as many interesting opportunities for cleverness and expression as you’d hope. For these reasons I would recommend to anyone like me: if you dig the look, enjoy weighing nuanced strategic options in and out of turn-based combat, and don't mind having a very full plate, there's a lot of fun to be had with Venaitura.

And if it doesn’t click for you right away, stick with it! The game really starts find its voice in the 2nd and 3rd sections."

Don't worry, little guy, I'd be nervous if I was the one fighting them, too!

Thanks, random NPC! I'm sure a dog will make great use of such helpful information.

Close
01/16/2019 02:21 AM
Maybe this will be my last project using RPG Maker 2000. I wanted to go as retro as possible with this project, and there was nothing quite like the classic RM2K to make that possible! =B
kalledemos

Close
01/16/2019 01:44 PM
How did I miss this?! If this is even just remotely as good as tsufana or tsufanubra, count me in. The non-generic class roles have my interest piqued too.

Close
01/16/2019 11:37 PM
I'm hoping this project will absolutely blow Heroes of Tsufana out of the water! Also, if all goes well, we're hoping to go the commercial route. We've already got a pixel artist, so if a composer would just somehow fall into our laps that'd be absolutely fantastic. =O
narcodis

Close
01/22/2019 08:08 PM
Hopefully the experience will match (or surpass) how it looks in screenshots! Everything’s coming together quite wonderfully, I have to admit. Got some awesome people on board :D
InfectionFiles

Stand back. Artist at work. I paint with enthusiasm if not with talent.
8340

Close
02/18/2019 01:53 AM
PLACE HAS GONE ALL SUPER-STYLIN', YO! Mirak, you've done quite an outstanding job at making this page into something truly spectacular. Your efforts are greatly and truly appreciated! =D
Tw0Face

Also, the main download's been updated with some QOL lmprovements (like increased walking speed in towns and dungeons).

Close
03/25/2019 01:51 AM
Slightly updated the demo, because apparently I forgot a few things along the way. I think I'll be catching things forever at this rate!
kenlan
515

I'm hoping this baby's gonna be published by the time the next Misaos take place, though. =P
Pages: first 12 next last