0 reviews
Eight hundred and fifty five years ago the Hypergate Artery between Earth and Antares was terminated.

Trapped in a desolate corner of space the colonists on the remote mining outpost of Boaz formed the Antares Directorate, a draconian government dedicated to preserving human life in the Antares Sector – no matter the cost.

Now, despite horrific setbacks, the Directorate has developed a new form of FTL that utilizes psychic ‘slave brain’ technology to enter hyperspace, ushering in a new age of exploration.

New planets have been explored and colonized, but mankind’s dominance over the stars is crumbling. Anarchy reigns as corruption paralyzes the government, while psychotic mutants, slavers, pirates and deranged cultists infest the star-lanes.


Will you be strong enough to carve out your destiny?

● Play as Captain Juliet Dziewulski an up and coming mercenary

● Customize and upgrade the Archangel – your own spaceship

● Earn credits by collecting bounties, trading and taking on jobs

● Unearth the mysteries of the Antares Sector

Behind the scenes - Ship Design

Work continues on PSI Dogs, though I don’t really have much to show off right now.

Most of what I’ve been doing this past week has just involved making new models and trying to get better with Blender. An abortive attempt was made to try and learn how to use 2.8, but for the life of me I still can’t figure out where anything is on the UI, so that’s just something I’m going to put off for the next few months. Or years. Probably years.

Anyway, I posted the new city screen for planet Vulkan as a screenshot but I’ve done another spaceship model and I thought it might be interesting to look at my design process and see some of the ship designs I rejected and how they’ve evolved over time.

This is the latest model I made. In the lore it’s a corvette, bigger and more heavily armed than a fighter while still remaining maneuverable and capable of a number of tactical roles but isn’t really capable of going toe to toe with larger ships on its own. 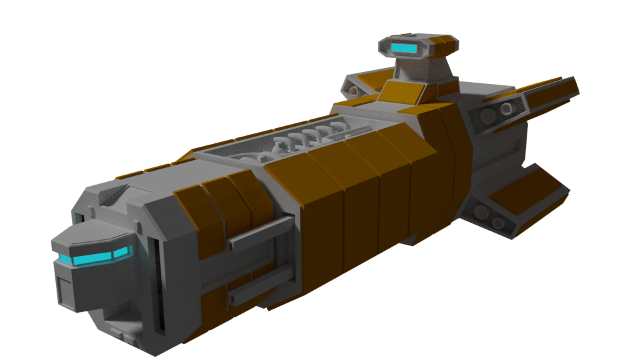 … And this is the first one I made. I’d like to think I’ve come a long way since then.

This render actually predates Bounty Angel by a few months. Originally I was going to make a game in RPGmaker MV and use a Mode 7 plugin I’d found. Instead of being a spaceship it would have been an airship, and you would have been a bounty hunter hunting down outlaws on a desert colony that had been separated from Earth somehow. So, kind of a cross between Trigun and Legend of the Galactic Heroes.

Making the model was as far as I ever got, though. I cannot properly describe how much I hate working in RPGmaker MV so I lost interest fairly quickly. I think this model is all that ever got finished.

After I finished up Bounty Angel I realized there was a lot I still wanted to do so I dug it up and fixed it as best I could. 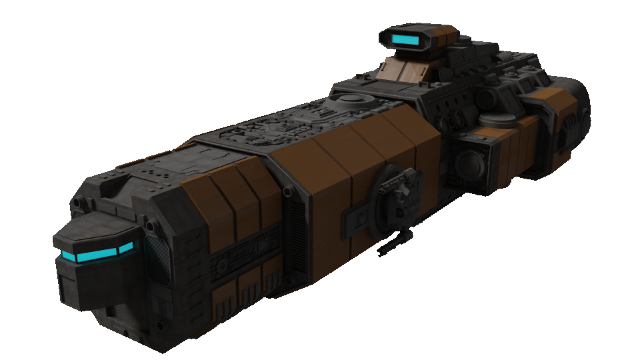 I’ve always been a fan of the Eve Online machinima Clear Skies so it’s a lot bigger than the Millennium Falcon sized ship from Bounty Angel. To this day I still can’t make up my mind whether or not the conn is on top and the gunnery station is on the bottom or if it’s the other way around. That’s something you’re just going to need to have to headcanon, I guess.

After that was done, I started working on the fighter model. This is as far as I got... 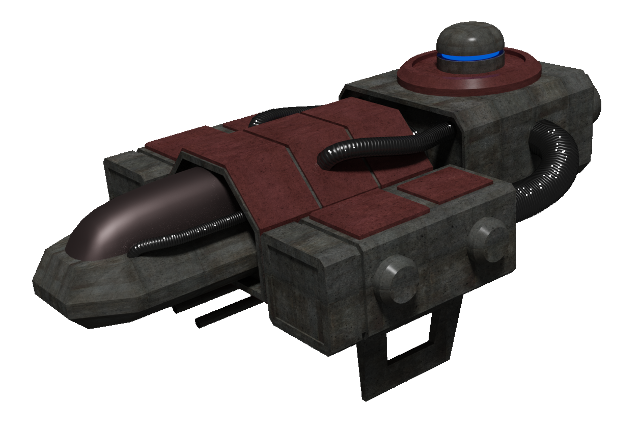 … Before I promptly abandoned it.

I think I ran into what I like to call “Star Destroyer Syndrome.”

In the original trilogy the Empire had a big triangle ship, and a bigger triangle ship. In the Expanded Universe they’ve got:

A small ship that’s a triangle with solar wings:
https://starwars.fandom.com/wiki/Raider-class_corvette/Legends

Another small ship that’s a triangle with a radar dish:
https://starwars.fandom.com/wiki/Vigil-class_corvette

A medium sized ship that’s a triangle with the front part missing:
https://starwars.fandom.com/wiki/Gladiator-class_Star_Destroyer

Don’t get me wrong, they’re all really pretty to look at (especially the models from Essential Guide to Warfare, they’re all completely incredible) but I hate how so many of the modern designs for Imperial ships are basically “Well, it’s a Star Destroyer, except X”. There was just so much more more variation in design back in the 90’s and I really wish the Imperial Navy had kept up with that. Lancers, Carracks, Ton Falks, Dreadnoughts and Strike Class Cruisers all look great despite not being triangles.

So… I started over, and made this instead: 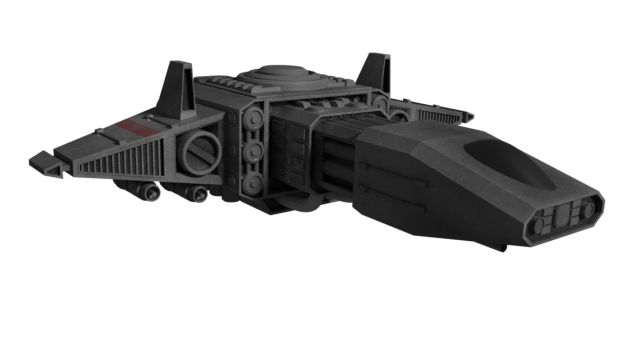 You can tell it was made by the same culture but it’s not literally just the Archangel, but a fighter. It also looks a lot more maneuverable, which I like.

I tried to keep up this same design ethos with the corvette, too. 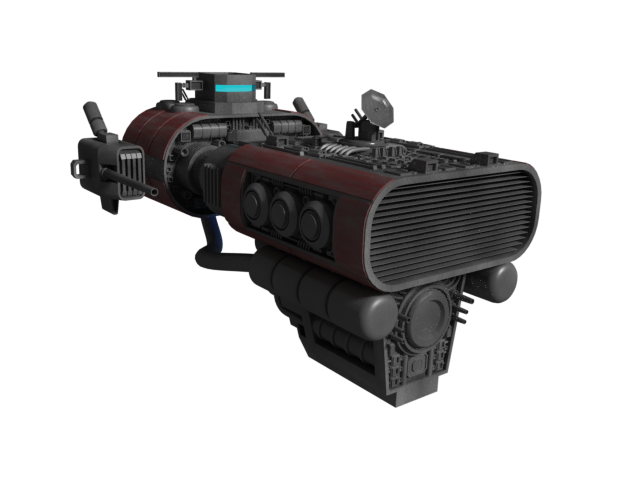 The sides are all curved instead of being octagons, there’s some negative space between the fore and aft modules, I added some external fuel tanks, and it’s got some extra engines on the bottom. Turret placement is similar as is the bridge structure, but I think it’s different enough to the point where I can get away with it.

I know this might ruin a bit of the magic but whenever I do ships, I always just model some basic geometric shapes, then add in greebles. 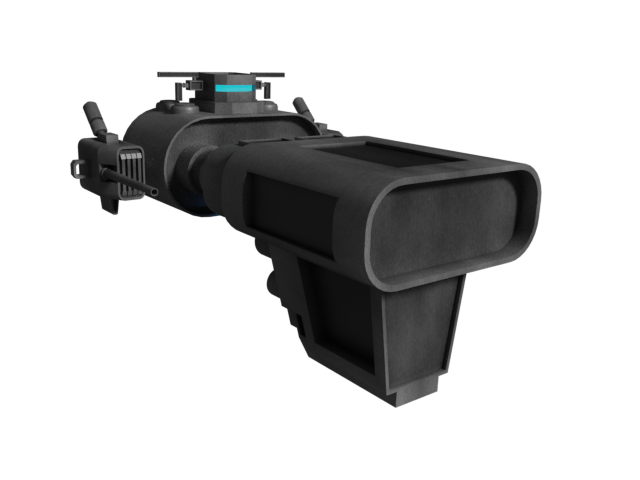 For the uninitiated greebles was a word coined by George Lucas for small details that don’t really serve any mechanical function. Making them can be kind of tedious, though, as you can see on the above image, my models would look completely horrible without them.

Anyway, I guess that about wraps up this blog post?

I’ve always been pretty good about taking criticism, so even you think everything I made was terrible and want to laugh at them, or disagreed vehemently with my ‘controversial opinions’ about Star Wars ship design, feel free to let me know.

Just a mock up for the battle screen. I'll be spending the next few days animating all the buttons and gauges.

Another character (also done by CChameleon) and a tiny Neuromancer reference.

I got around to fixing the text box. Once again, the portrait was done by CChameleon.

For now I'm just getting a lot of story details down and working on a ton of interior scenes.