This game is a demo. In the writing of this review, it is assumed that the dev is going to correct these problems.

Story: A by-the-numbers fantasy following Wayne, a royal guard for the city of Urora, as he joins Yuri, a Spirit Guardian, in their effort to save Urora from a demon invasion. In spite of its standard formula, it manages to be fairly interesting with likable characters. 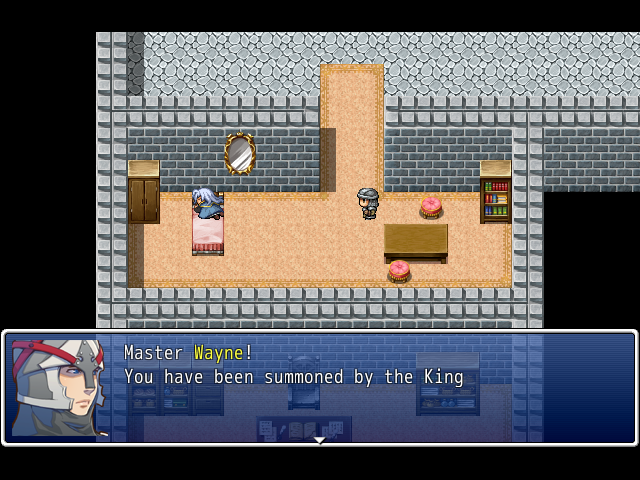 To the Batphone, Alfred!


Writing: Yeah...no. English is not a first language here. The above screenshot may be the only sentence in the entire game that parses correctly. If you're looking for good grammar, look elsewhere. As for plot and pacing, the writing does fairly well. There was a moment in the beginning where I was worried that the dev was going to expo dump, but thankfully, they gave a flashback instead, choosing to show instead of just tell, for which I am grateful. So, grammar, not so good, but the story is overall presented alright. However, SPOILERS HIDDEN IN TRANSPARENT FONT. HIGHLIGHT TO SEE. Yuri's death occurs too soon. We need more of a chance to get to know her. There isn't enough to really hit the player, and that love poem tribute that pops up certainly doesn't seem justified. The story needs to build Yuri's character a lot more before we really earn anime love tributes. SPOILERS END. 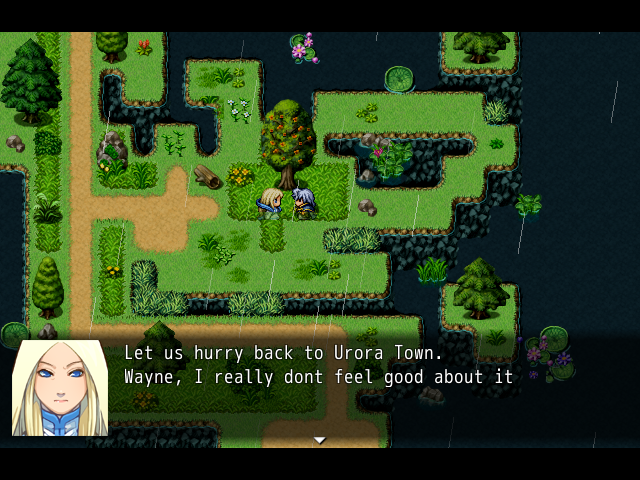 "I felt a great disturbance in the Force, as if millions of voices suddenly cried out in terror and were suddenly silenced.
I fear something terrible has happened."


Gameplay: Gameplay leaves a bit to be desired, but it's not a disaster. To start, you only get four standard battles, and those are four slimes, all in the same spot. The combat is bare turn based, and it doesn't even look like the character stats have been changed from the database, although the spells seem to be custom. There is one auto-lose battle, and then a badly unbalanced boss battle. I don't mind a hard battle, but there is far too little healing. Only the Fairy can heal, but the boss hits with nothing but area attacks, making it impossible to keep your party members alive. After that boss battle, the demo glitches out, so that's where it ends: four standard battles, a plot battle, and a boss battle.

The game immediately starts you with two quests. One quest has you picking mushrooms for mushroom soup and the other has you collecting slime glue for a broken jar, and I'm pretty sure we wouldn't have gotten those slime battles otherwise. First, dumping those slime battles on a single map in a little spot was a huge mistake. Those should have been spread across the whole forest area and on all three maps. There should have also been other enemies mixed in to make the quest more challenging. Even without the slime quest, this game just needs more encounters than it has. Also, this game desperately needs HP and magic restoration items.

Graphics: Pretty bland RTP mapping. It's not terrible. It just needs to be spruced up quite a bit. Liberty has some good tutorials on mapping. Also, the dev needs to learn shift-mapping. When mapping with autotiles, you can force a tile to map just the edge. Lay that tile on the map and then, while holding shift, right-click select the edge of the tile, and while continuing to hold shift, lay it elsewhere, and you'll see it lays as the edge instead of standard auto-tiling. You have carpet, roads, and other things that badly need shift-mapping.

Sound: There's some very nice music in this game. I wish I knew where it came from. A significant portion is also well used RTP, but considering the first half the demo is music I'm unfamiliar with, I feel like the RTP music is just there as a placeholder.

Conclusion: The game is still in an alpha state, but there's some good here. The game has potential. Definitely worth keeping an eye and encouraging the dev. In its current state, if I were rating this game, I would probably give it two stars, but there's already stuff here that makes me want to give it higher. As it is a demo that I clearly see is still in production, I'll leave it unrated.

Close
01/31/2019 03:11 PM
Thank you for the review.
Yes, English isn't the first language here.
I just updated my game a few hours back with some spelling, punctuation and narration changes using Grammarly but still, there might be mistakes here and there.

I got your point regarding Yuri.
Even though he(Wayne) hated her at the beginning, the bickering with Yuri bought him close to knowing her. He never had met a spiritual guardian before. With whatever little time he spent with her, he got to know her position, powers, and when suddenly such a strong personality was shattered before his own eyes he just couldn't get over it easily.
The poem was actually meant as a goodbye song( rest one can imagine his other feelings as well)

Well, that itself is a crucial part in the story, as well as for the upcoming events which I just added and now I can finally say my demo is complete with the story. We still had no clue why Yuri felt weird at Akiko's house. Those are the questions which have been answered after that boss fight you had and that also justifies the title of my game and hence fulfills the purpose of the demo.

Regarding the gameplay, there are no default stats, but they are subject to continuous revision based on remaining game fights and battle scenarios. Fun fact while I was testing that boss battle, I was easily able to defeat him 2-3 times one after the other. So I uploaded the game demo. But after compressing the game file and then playing it later on, was hard for me as well.
As for the slimes, spreading them across the area seems like a better option but that to near a water source. ( That is why I selected the middle area but seems like it became a hotchpotch)
Random encounters, more enemy fights, items, equipment all of these would be accessible in the later part of the game. This was just an introduction with the story, characters, the battle system, and the theme.

As a player of RPGs myself, I don't like forced battles which are continuously thrown upon the player and after some point, it becomes tiring to even just continue. Four - Five battles for 20-30 minutes of a demo, consisting of a boss battle and introductory part sounds a lot.
As for this starting area "Verranium Forest" I want it to be quiet and peaceful at the beginning. As the story progresses, open world will become accessible and there will be so many areas to encounter enemies and gain experience.

I will try to improve my mapping.
Pages: 1