What a colorful dungeon crawler

Story: You are Grace, a mercenary assigned to Darem for a year to defend it against goblins. The chief of the town doesn't think a woman is up to the job and decides to change the contract so that you only get half, so that he can hire a second mercenary, named Gallium. He's going to change the terms of your contract a lot. As you fight against the goblins, you realize that you could probably just talk to them. The chief would rather just kill them all. Then he wants to put them to work for free. This guy's a peach! 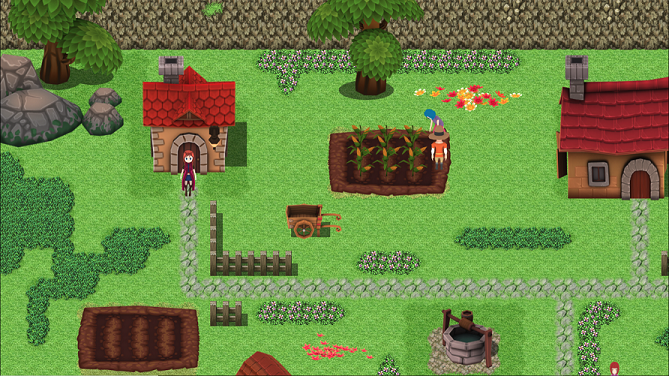 I really love this graphic style.


Writing: The writing is quite good, and except for a few minor spelling errors here and there, the grammar is excellent. The story doesn't overwhelm you with exposition and it's very nicely paced. I have very little to say about it. It's very good. There's nothing bad about it, but it doesn't particularly stand out. The story is very standard and the character tropes are very generic. Don't let that deter you. The story may be by the numbers, but the characters are very much their own people and they're interesting to get to know. The story isn't a comedy, but it knows not to take itself seriously. It certainly qualifies as lighthearted. 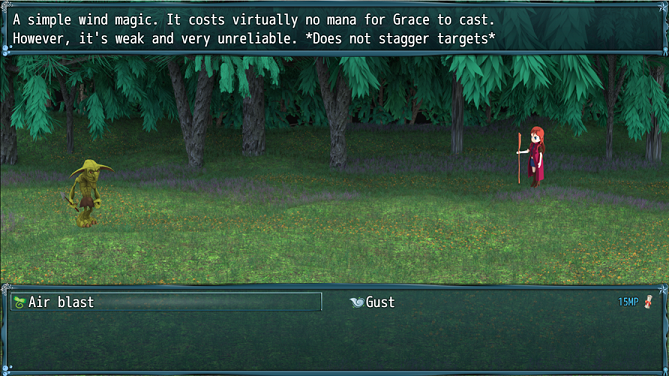 
Gameplay: Turn based combat. Again, very by the numbers. The game takes no risks in gameplay. It's very well balanced. You'll find Bhavacakra Grace to be a very safe gaming experience. You'll see nothing unfamiliar here. It has a rudimentary crafting system which appears to be the only way to acquire healing items. Encounters occur on screen. There are no direct attack abilities; rather your initial combat commands opens a new combat menu that lets you select from a number of possible moves. The game is a bit of a button masher, as once you figure out defeat your enemies, you're essentially locked into doing the same thing over and over again. 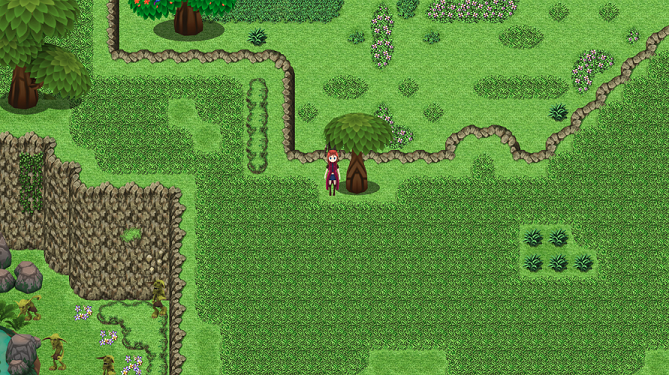 
Interestingly, there are areas that are just for show that you shouldn't be able to get to where goblins are dancing on top, but if you manage to find a way up there, which I did with a tile error, you will still be able to fight those enemies. Acquire the materials you need by foraging for them, or once you get to Falin, you'll be able to buy them. Falin is also the first place you can buy armor and weapons. Magical energy is restored with alcohol; beer and vodka. So, alcoholism is your primary means for casting spells. Good to know! 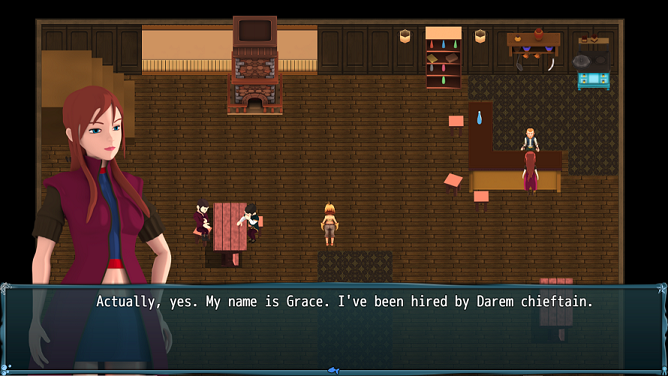 Very stylish graphics that are apparently all made by the developer! Or at least they're not listed in the credits.


Graphics: I've already described them quite a bit and you can see them for yourself above, so I will point out that there are occasional tiling errors, such as the one above. There's also a rock formation early in the mines that you can walk on top of a portion of it. Additionally, any trees near walls allow you to walk on the wall. Additionally, with the sprite style, I think the dev would have strongly benefited from making 8-framed sprites and using an 8-framed script. They walk very stiffly.

Sound: Very nice, music. Some very good town music and map exploration music. The battle music, however, is really a bit dull and boring. I'd have chosen more active music for battles. 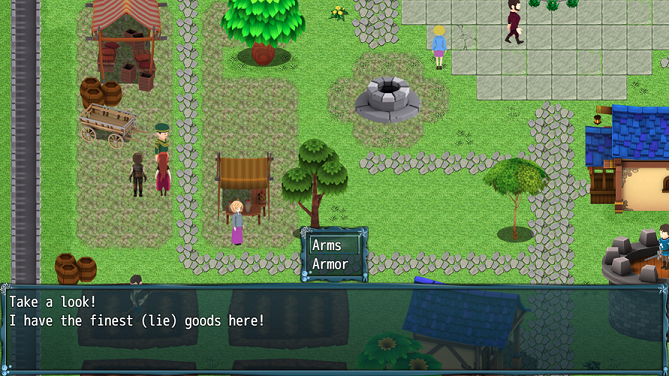 This merchant clearly read The Art of the Deal.


Conclusion: Totally worth it for the graphics and music. The game itself is good, fun to play, but ultimately a forgettable experience, which is a shame because this is such a pretty game, and so well made.