I suppose a peron has emerged to review this game!

"Magical Machi" was developed by LaytonsGal and is her first foray into developing RPG Maker games. As you'd expect this project bears the scars of that lack of experience since it includes a lot of common rookie mistakes. On the other hand, the game has a lot of stuff going for it in my opinion. As a result, I'm hoping LaytonsGal won't take my criticisms too personally and use this review as a means for improving her future efforts.

Story
Summary
You play as Machi, a gaming gal who loves magical girls, whose been setup on a blind date by your best friend. Sadly, the guy she set you up with turns out to be psycho killer that peels the flesh off of his victims. In order to save Aki, your best male friend, and yourself from his clutches you'll need to follow the bread crumbs and solve the puzzles that lay ahead. Of course, if you screw up the only thing you have to lose is your life as well as your soft dainty skin.

The game contains several notable spelling errors. These errors range from simple spelling mistakes such as spelling out loud as "outload" as shown above. Or to errors so bizarre I"m not even sure how they were made. After all, you'd think one of the play testers for this game would have noticed LaytonsGal's absolute butchering of while as "whi're" at some point.

As you can imagine this isn't all of the spelling errors that need to be corrected in this game, but this section does highlight a few of the more notable ones.

As shown above, the game includes at least one sentence that's been utterly brutalized by poor word selection. So much so, that I don't known how this issue didn't get caught before this game was released. After all, the credits mention several play testers.

To add to the game's suffering there are a few places where the game includes cut-off text. These issues revolve around at least one item and a couple of dialogue boxes. On the plus side these issues really don't hinder the player's ability to understand what's going on, but I'd still suggest going over the game again to remove them. After all, it really adds to the overall quality of the game to hammer out the small issues as well as the big ones in my opinion.

On the gameplay side of things the game is a rather simple puzzle adventure game where you'll need to solve math problems, use a little basic logic, as well as turn over almost every object you can get your grubby paws on in order to find clues you'll need to save the day. On the plus side, the game is pretty casual in terms of difficulty. So much so that the game's dialogue often tells you what you need to do in order to advance. Though, I suppose this could serve as a deterrent if your looking for a game that will challenge your puzzle solving skills.

Sadly, the graphical presentation is a bit of a mixed bag in my opinion. On the plus side the game contains a lot of solid original assets like the one shown below. 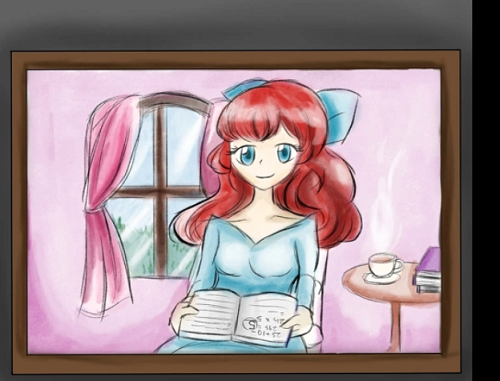 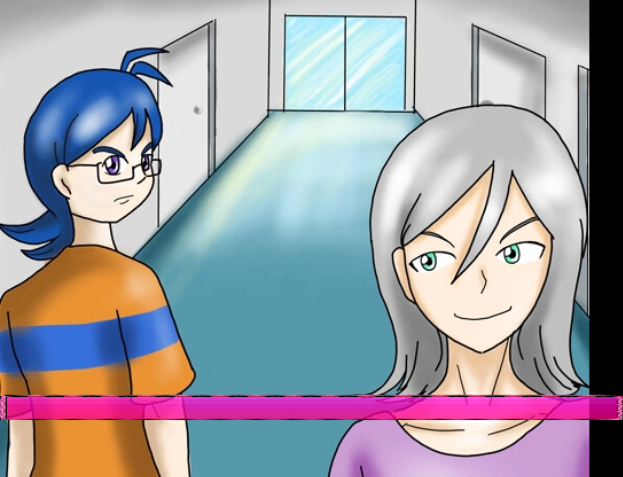 Seriously, what's going on with Aki's neck & spine in this image?

On the downside the game also suffers from some rather iffy art at points as shown above. To make matters worse the developer didn't fully fill in the screen for her game. As a result, the images shown above are forced to fill in part of the screen with black squares. Though, I suppose the developer could have been hoping that the thousand nations of the Persian empire would come crawling out of the blackness in order to kill Raizo. I know I was by the end of this game. Of course, sometimes the game doesn't even cover up the remaining squares in darkness. Sometimes you can clearly see the map behind the image. A decision that comes across as even more lazy than simply designing this images to fully fill in the screen in the first place.

As shown in the images above, the game contains a few minor mapping bugs where the player can crawl over or onto objects that should be impassable. In fact, one of the more notable examples of this issue in my opinion can be found in the first room on the fourth floor of Raizo's lab. In this room you can climb on one of the ceiling lights in order to scale the rooms back wall.

Of course the most notable bug in the game is the one I show above. If you trigger this little gem you'll need to reenter the game's main menu in order to load your most recent save file.

And while there was one other major bug I ran across. I haven't found a way to consistently trigger it so far. As a result, I'll keep the details on that one to myself for the moment.

"Magical Machi" contains a lot of the issues I've come to expect out of first time projects over the years. On the other hand, I can't help but admire how much the game strives to form an identity of its own through its original art assets as well as flipping the script a bit by having the player play as a gaming gal on a mission to save a dude in distress. And while gender reversals like those aren't unheard of. It doesn't happen nearly often enough in my opinion. As a result, I can't help but have a soft spot for this game despite all of its flaws. Even so, I can't over look them when it comes time to render my final verdict. So if your looking for a relatively casual puzzle game with some horror elements. You might want to give this game a try if you have 90 minutes or so to spare. 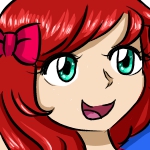 I won't talk about every single point, but I do understand there were probably gonna be random spelling errors and some parts where the player might get stuck or something that I might have missed.
I'll most likely be trying to do an updated download where some of this stuff is fixed, so I greatly appreciate that.

Probably the biggest issue I knew was a problem that I was unsure of how to fix was resolution issues? But I hope to make that better in my next game.
Also yeah, I actually worked on art for this over the course of a year, so because of making improvements as I went some of the quality is a bit over the place, I agree totally on that. And I hope to make the quality more consistent in my next title as well.

Overall, thank you for this review. I'm really glad you had some amount of fun with it, and it's great to know the original assets stood out at least a bit. Thank you again and I'll definitely be looking back to this review for future reference.
Pages: 1